There are several reasons why young Athenians could come under the category of "disenchanted youth of Europe". While some cling to the continent as a last bastion of hope, others turn their backs on the union. We spoke to young people of different backgrounds across the Greek capital. They spoke of their experiences of living in such difficult times full of uncertainty. Portrait of a generation. 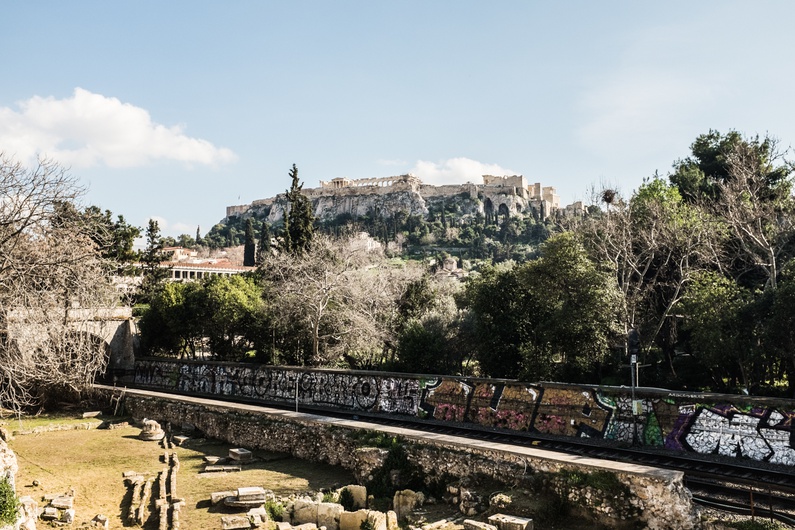 After the economic crisis deeply wounded the country, Greeks have once again found themselves tackling a situation too big for them to handle. The refugee crisis is proving itself to be an extreme situation, perhaps comparable to the 1687 siege of Athens by the Venetian Republic, when the Turks occupied the Greek capital. Doge Francesco Morosini delivered a single cannon blow to the Parthenon – which up until that moment had remained pretty much intact. 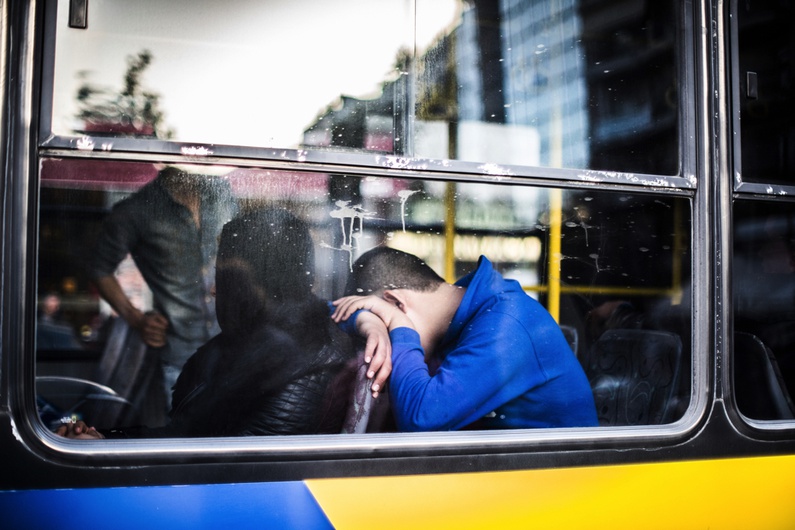 Obviously, the current situation is very different to that of the 17th century, yet Greece is once again left abandoned and crumbling away, as if having been hit by a different kind of cannonball. The choices offered to many young Greeks paradoxically mimic those of migrants arriving in the port of Piraeus and on the islands. Few want to stay. Many want to leave but remain trapped within the country waiting for something to change. One group waits for the borders to be opened whilst another waits for new work opportunities to finally arrive. 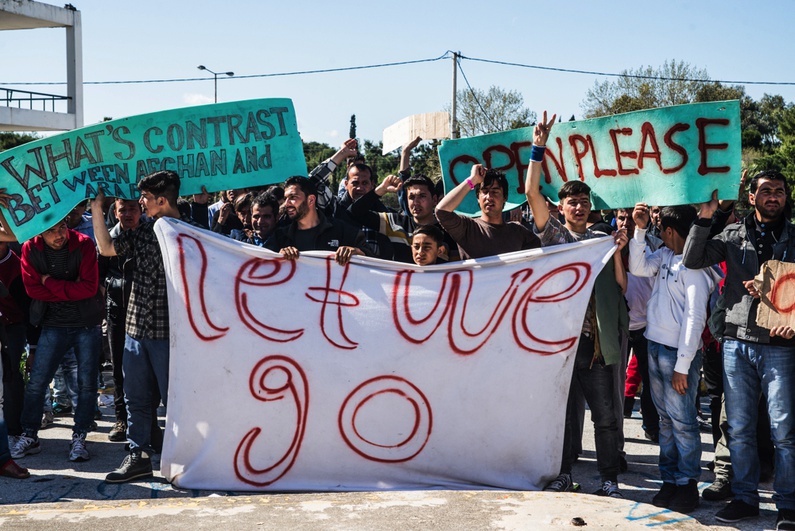 The newspapers no longer talk about the economic crisis, though it’s still intensely felt. The International Monetary Fund has stressed that, had there been some immediate assistance from Europe rather than opposition to restructuring Greek’s debts in 2010 – leading to a two-year wait – Athens would have been saved at a much lower cost than the price it's still paying today. Will Europe be able to forget the past and restore hope to the Greek population and a future to its youth? 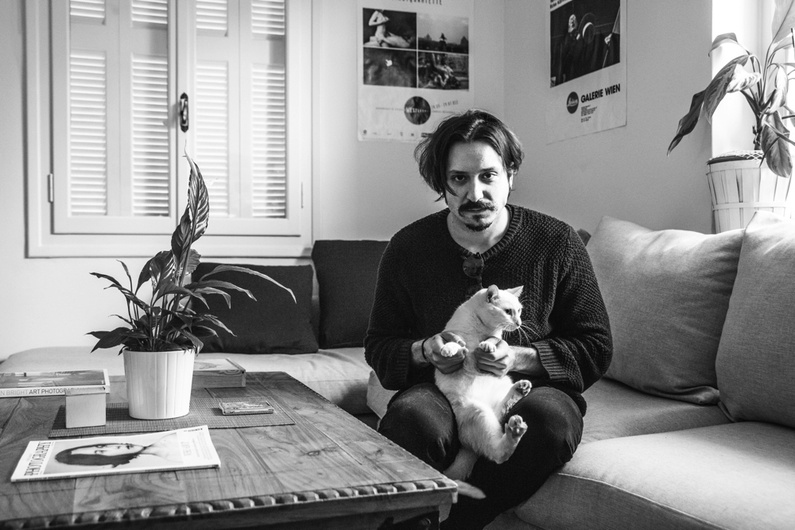 As it stands at the moment, should Greece stay in Europe? Absolutely not. We’re the only EU country with a left-wing government and they don’t want us. That's why they keep on pressuring us. The next stage of agreements waiting to be approved is really harsh. They’ve practically threatened us: either sign and pay or we’re kicking you out. But had we been forced back to the drachma the debt would have been even higher. In short, it's a disaster, and being in Europe has definitely not been a fair deal. They want to take everything – our airports, our islands, our ports. We’ve been sold.

So was joining the European community a mistake for Greece? I think that the European Union’s not for everybody. To start with, for the first 10 years they lent us a lot of money towards developing infrastructure and other projects, but then when it came to giving it back; we realised that the money had run out. It was stolen by politicians and spent on the 2004 Olympics. 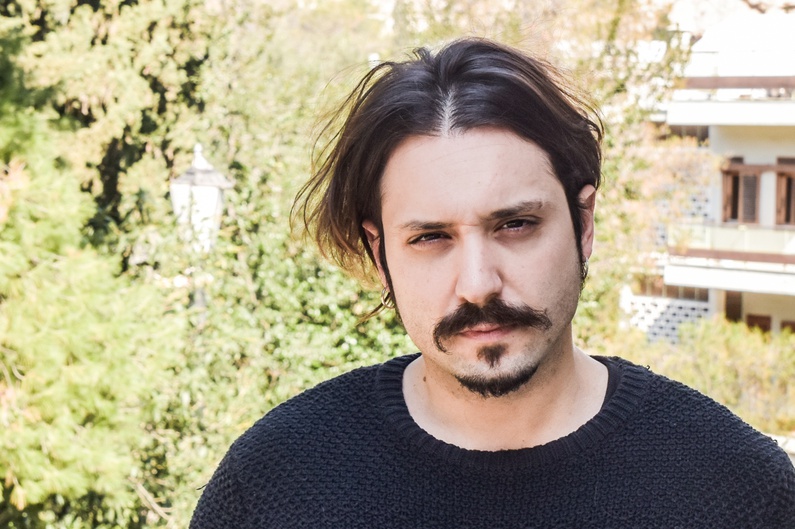 What will happen now? They’re really forcing us to leave. I don’t think that the agreement reached with the European Community can work. There are too many cuts and they know that perfectly well. I think they’re trying to say "we want you in Europe", but with all the sacrifices they are asking for, they’re trying to force us to have to leave the EU ourselves.

What’s the future like for young people? I’ve got no idea. I’m not even sure if such a thing exists. I think that in 10 years, there’ll be a different community to the one that exists now. Maybe borders will be different – they’ll try to divide us between North and South.

Why did you choose to stay? I’m still here because, despite everything, I really like the way of life. If you’ve got a job that you can support yourself with, then this is the perfect country to live in. Luckily my work is fine and I get the chance to go abroad to photograph weddings, so I can’t complain at the moment.

What do you think of Athens as it currently stands? Living here has become cheaper – prices have gone down. We’re creating a community of young people where everything costs less because we’ve all been living through the crisis, we know what it’s like to go through hard times such as this. 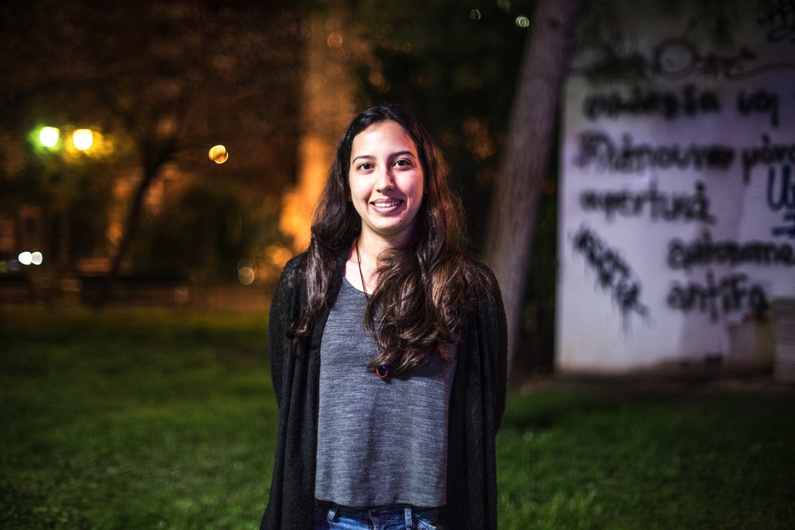 If it were up to you, would you leave the EU? Yes. At the moment I don’t think staying would benefit Greece at all. It would be better to no longer be a part of the EU seeing what we’ve had to go through.

Was demonstrating – especially so fiercely – the right thing to do? Yes because in some form we got results. There’s a lot that needs to be done, but I think if we hadn’t gone out protesting in the squares, things would have been worse. 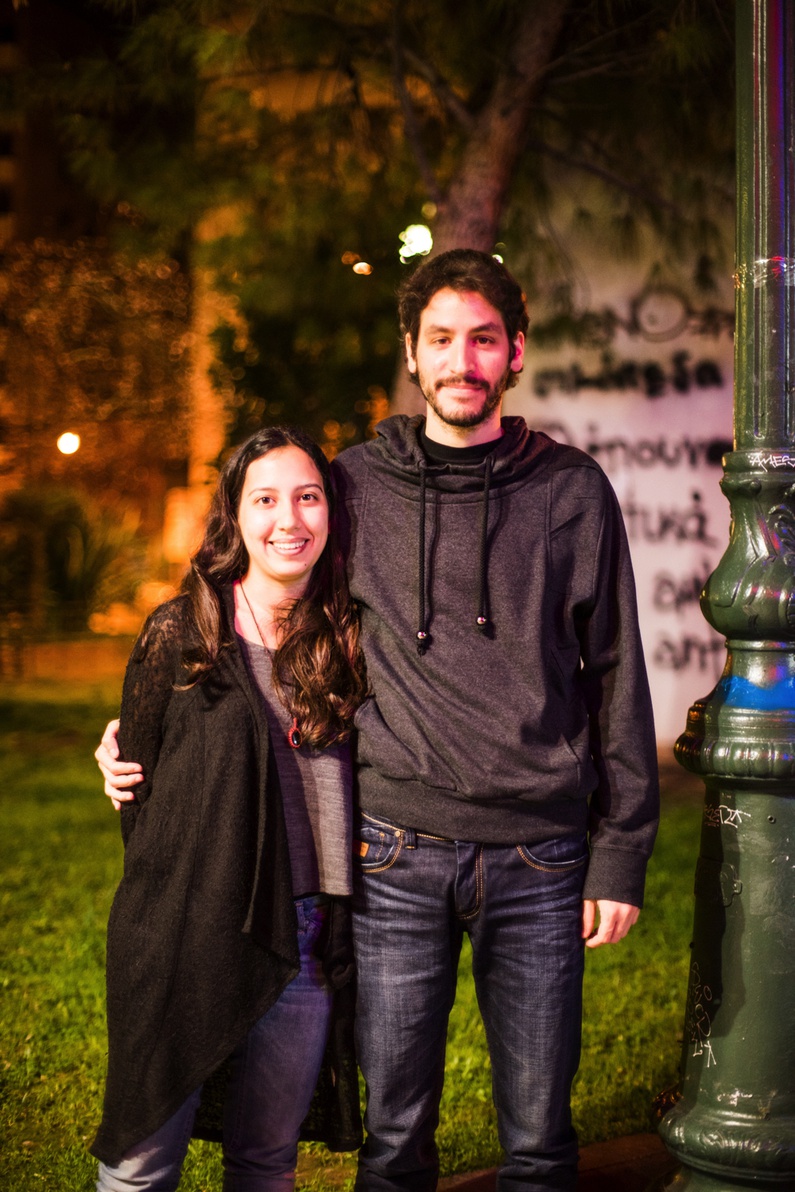 Don’t you think that compared to how it was, nothing much has really changed and that the demonstrations didn’t have any affect? No – and I’m ready to go back into our squares at any moment. Us young people have the right and the duty to change our country for the better – regardless of the rest of Europe. A different Greece is possible and it’ll be us young people who’ll have to take this on.

So you’re not planning to leave Athens? No, I'm fine as I am. This is my country and I've not got any plans to change things. I live here and I’m not leaving. 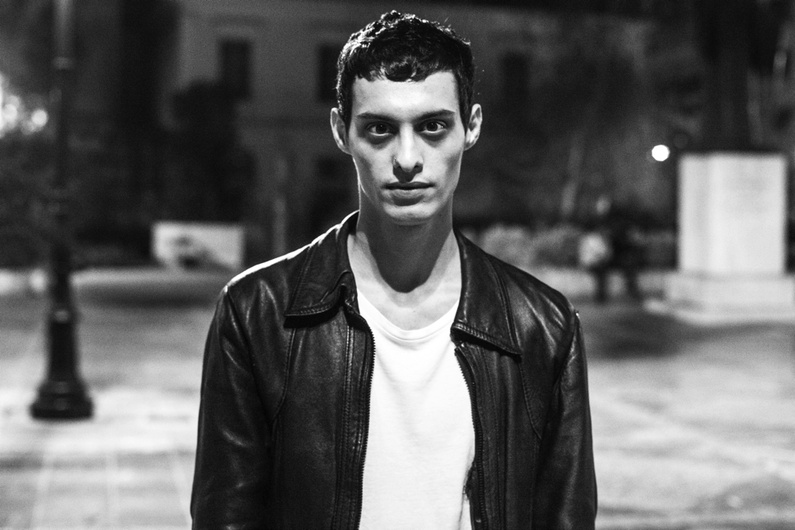 What do you think of the European Community? Do you think that staying in the EU after the economic crisis was the right thing to do? I think that being united in a single community is something positive for all Europeans. It's something that makes sense if we look back at history. When a crisis starts – but also just in general when there’s a problem – people need to cooperate and work together, not divide amongst themselves.

Have you ever thought about leaving? Athens is my city and where I go to university. I’ve travelled a lot working as a model and I think that Athens is one of the most beautiful cities to live in. In any case, like many other young guys, I have thought about moving somewhere else. Living abroad is a great opportunity to gain experience. 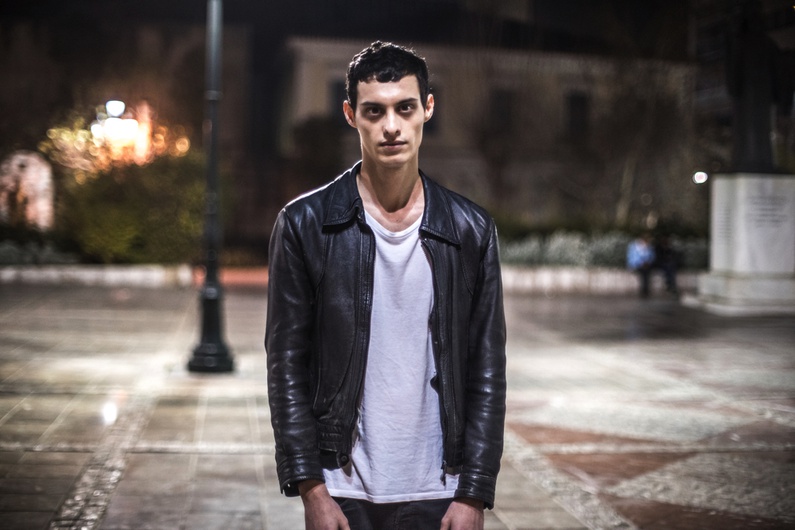 If you have to move somewhere else, where would you want to go? I’d really like to go to London. It's still in some ways one of the hubs of Europe, and the city has limitless opportunities.

Do you think the decision to head into the piazzas and protest was right and that it brought results? Protesting and going on strike – given what was happening at the time – was practically inevitable. In some ways it was the people's right to express their unease, even if it’s made our daily lives difficult. 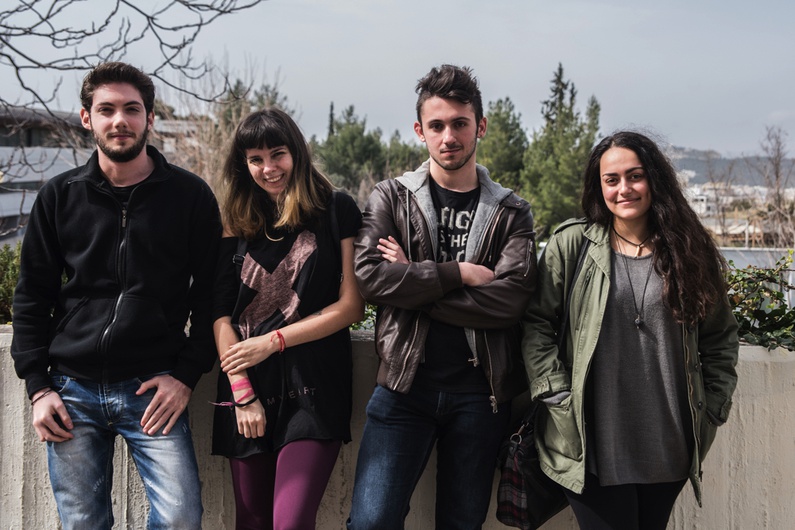 Do you think being part of the European Community has been positive for Greece?

Marita: The differences within the EU became clear following the economic crisis. As such, the EU – as it was designed – doesn’t work. We Greeks have really seen this. I’ve not seen a real sense of solidarity. In a strong community people help each other when they’re in difficulty, but it wasn’t like this. They’ve only told us: "You must find this money. I’m not interested how – just make it happen." Is this European solidarity?

Philippos: The EU heavily financed the construction of infrastructure, streets and universities. If we were now to leave the EU, it would be like removing a vital organ and Greece could die. Many young people, myself included for example, would like to leave and go abroad to work and study. If Greece were to leave the EU, there would be a lot of problems getting work permits. We need to stay – to leave now would be a huge mistake for our future.

Do you think that striking served any purpose?

Narod: Well for starters, striking for your rights is right and fair. The problem is that in a situation such as this, people need to go to work and earn money because otherwise how can you feed your children or pay your bills? That’s why nowadays going on strike is a harsh, extreme choice to make. Strikes are effective at the end of it, your government listens and is willing to change things.

Marita: The problem is that nowadays the Greek government doesn’t have any power, so strikes have an extremely limited effect. It’s definitely not our government who makes decisions for us; it’s more Europe. It’s difficult to go on strike. Imagine for example, as part of a protest against Germany, the underground isn’t working properly: what affect would that have on Berlin? None. If we protest here, very few people abroad pay any interest. We must find a new way to make ourselves heard outside of our country. 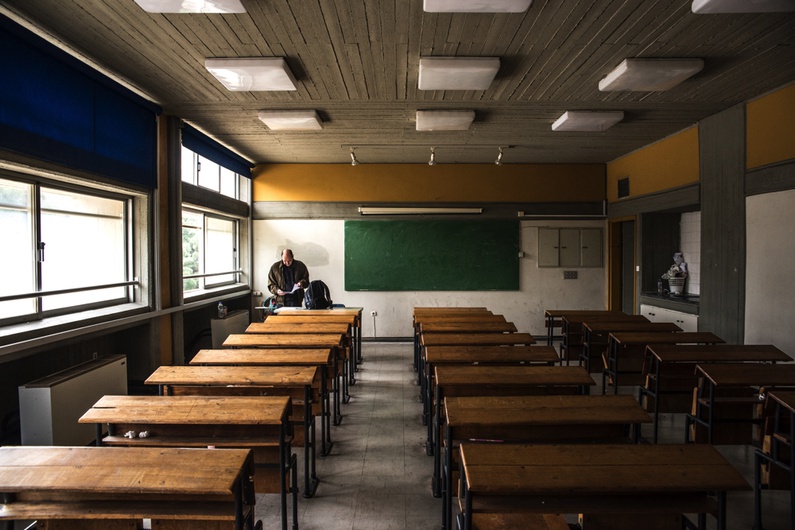 Is it possible lead a more prosperous life abroad and then come home with more resources and new prospects?

Philippos: I hear a lot of Greeks saying: "I’m moving abroad – I’m looking for a new job," or "I’m going to study to get better qualifications and then I’m coming home." And what’s the reality? Secretly, they know that if you go, they'll find it incredibly difficult to come back.

Giannis: If someone’s got the chance to leave, they should. You should give things a try. I don’t have any friends abroad and at the moment I’ve not got any financial problems, but this definitely doesn’t put me off leaving. My dream is to move to another country to try something different. If you can cope with being on your own and maybe feeling lonely when changing countries, then do it. As an actor, my dream is to go to Los Angeles and sometimes dreams come true. I’ve met many people in acting who’ve decided to stay in Athens to try and keep on fighting in their own city. I don’t think that either decision is right or wrong – it’s down to each person and their own character.

Narod: I’ve got many actor friends. They’ve decided to stay – leaving is an extreme reaction. I think those who stay get a great deal of support from their own families. I believe that solidarity, being helped and united, is a fundamental part of Greek families. Despite the thousands of problems, nobody is left abandoned – neither by their friends nor their loved ones. I don't see anything wrong with a young person nowadays deciding to stay at home with their family and saving money for their future.

Marita: Like me, those who stay also do so to help their families. On top of studying, I was lucky enough to have a job. When my family needed me to help out, of course I couldn’t refuse. My father has been working for some time but without pay. I lent a hand to pay the household bills and I feel proud for having stayed. 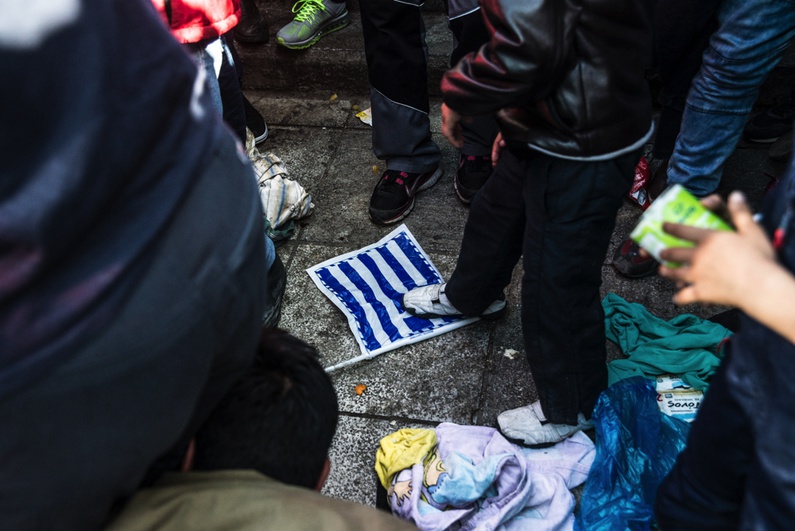 How have you got through the economic crisis?

Marita: My parents have always been actors working in theatres and we’ve never had much money. The crisis definitely didn’t help but, as we were already in difficulty, its impact wasn’t as strong in our case as it was for others. We’ve always been used to making do. I think that other families, who had never had to go through losing a job or something similar, suffered a much stronger blow. Now they’re also experiencing what we were before. In short, in terms of how I live, nothing’s changed.