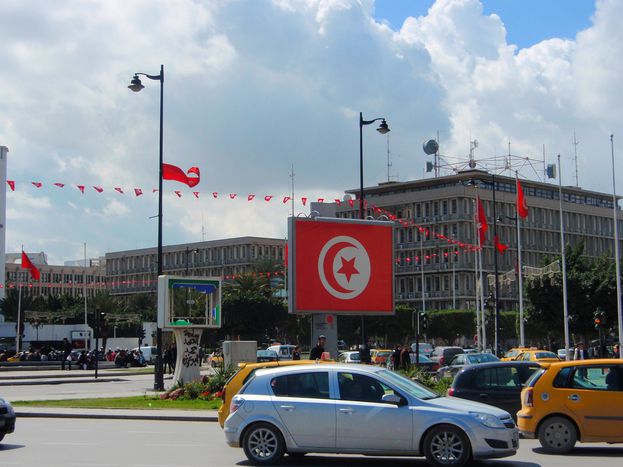 Tunisia has woken up in its first spring after the end of the reign of the dictator. No-one knows what will happen next, but overall one senses that there is hope for a new beginning

They stand together in the median of Habib Bourguiba Avenue between the state theatre and the international hotel: men in black leather jackets, in suits, fathers with shopping bags, a few women, some with and some without headscarves, children, about fifty people in all. Around them young men sell popcorn and toasted almonds. Police direct the typical traffic chaos. They stand in the shade of the trees along the street, discussing and gesturing. Today it's about Libyan leader Gaddafi, the UN resolution and the aerial bombing of the Libyan capital Tripoli. And as they have every day since 14 January, they discuss Tunisia, the past, the dictator they chased away, the future of the country and how they want to shape it. They call this spontaneous meeting place in the heart of the capital city the 'Agora'. 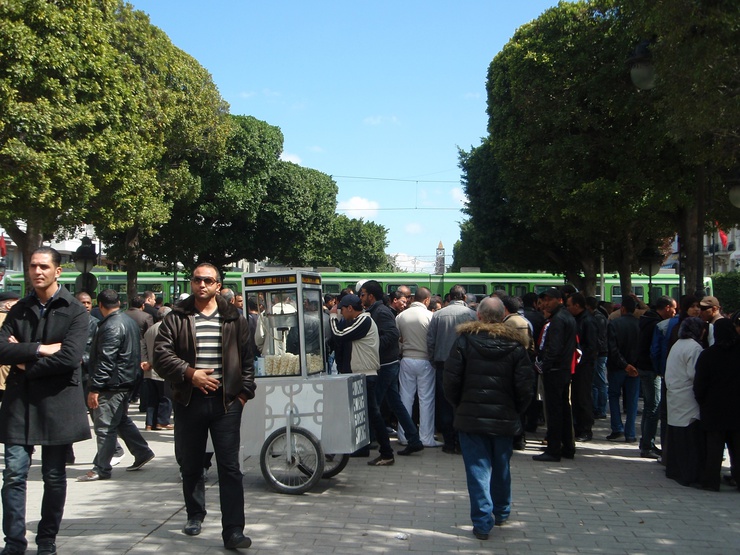 Just four months ago, a congregation of more than a handful of people in a public area in Tunis was unthinkable. Today, one encounters the signs of revolution in all parts of the city centre. Someone has written 'the glorious revolution of 14 January' in Arabic on an advertising pillar. An eight-year-old boy poses in front of the slogan, holding up a victory sign, smiling. His parents ask for a photo: as of late, journalists have been warmly welcomed to the capital city of the revolution.

The square around the clock tower at the end of the avenue is now called Mohammed Bouazizi after the young man who set himself on fire on 17 December 2010 in the small town of Sidi Bouzid, which in turn set the whole country ablaze. Tunisians have expressed their anger and their hopes on the faces of buildings and construction fences, slogans displayed in large letters like 'Freedom or death', 'Thank You Facebook' and 'Tunisian women are free and it will stay that way'.

Newspaper stands and bookstores have been set up. Under former president Zine al-Abidine Ben Ali nearly no foreign publications were allowed, but now the demand is so big that one must wake up early in order to be able to get hold of a current issue of French daily Le Monde or the satire newspaper Le Canard Enchaîné. At the bookstore El Kitab, brand-new exposé novels and books long ago forgotten because censorship didn't let it into the country are now piled up on the avenue. They carry red superimposed text: 'Remember 14 January', 'Who was Mohammed Bouazizi?'

Tanks still stand on Habib Bourguiba Avenue. The buildings of the detested interior ministry are still surrounded by barbed wire. On Kasbah Square, soldiers patrol a westerly exit to the old city. Here the biggest demonstrations against the transitional government took place. They persisted until the last henchman of the old regime had been removed. Here is where the provincial people came at the end of January, marching to the capital city so that the revolution wouldn't be taken from their hands. The spontaneous tent cities have since been taken down and the people have returned to their homes, but the memory of the 'People of the Kasbah' still remains. Everyone knows that if democracy is to take hold in this country, one may not forget. But in the wealthy capital there is also fear: fear of the islamists, of the communists, and of the uncontrollable hordes of young people who can very easily shout down any political discussion.

Election structures must be built by this summer, ads made and voters mobilised

The path to democracy is still long. Elections are set for 24 July to decide on representatives who will come up with a new constitution. Only then will conditions be decided that will to a democratic Tunisia. This will only determine the rules that will govern the parliament and the government. About fifty parties have already officially registered, and every day there are more. The structures must be built by this summer, ads made and voters mobilised. Until then, as many fear, the islamist party Ennahda can win over ever more sympathy and make policy from the mosques. As unknown as the future of Tunisia is, one thing is agreed: the worst is over. Anguish has been conquered. No matter how things go forward: the freedom that has been fought for so hard won't be easily taken away from the Tunisians.