After 200 years that "Italian Journey" by Goethe was published, the Italian Institute for Culture asked the travel reporter Andrea D'Addio and the photographer Laura Droße to go through the whole route, from Munich to Catania, travelling in a Fiat 500. This is how the adventure Goethe liebt Italien went.

Two weeks to accomplish the Italian Journey that Wolfgang Goethe, still young, undertook in the time span of 10 months starting September 3rd 1786 (with a fake passport according to which he's name was Philip Möller) and published a work with the same title 30 years later. The passport of the adventurers Andrea D'Addio, travel reporter who had been writing for a long time in Berlin, and Laura Droße, is instead a Fiat 500 showing the slogan "Goethe liebt Italien" (Goethe loves Italy, ndr). This is an initative of the Italian Culture Institute in Berlin, promoting the Italian language and culture in Germany, not particularly (or should I say not only) to document on how costumes and landscapes changed in the Bel Paese from the time of the German poet's Grand Tour, but rather to show clearly what Italy looks like today. Moreover, it would have been impossible to visit all the cities on Goethe's original project in just two weeks (October 2016). 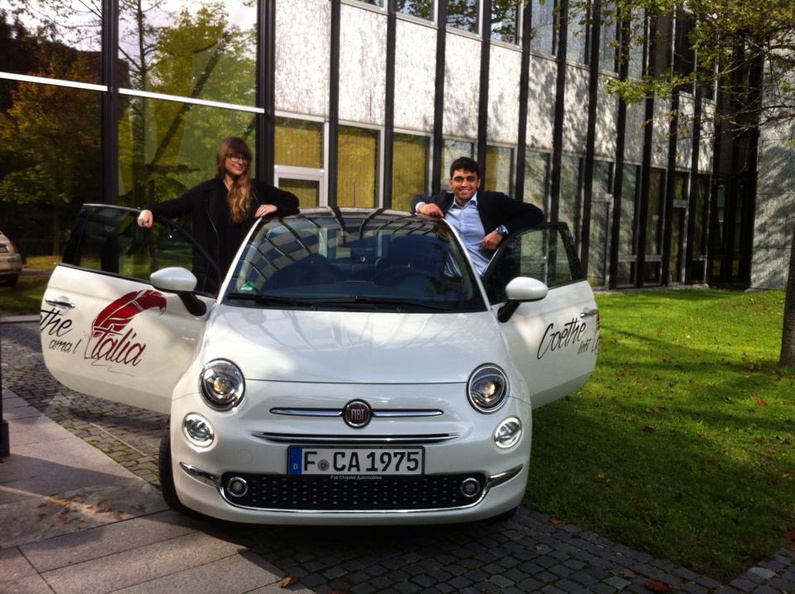 Italian pills from North to South

Andrea and Laura set off from Munich and visited Trento, Verona – where the German author liked very much the Arena – and Venice. Here Goethe saw the sea for the first time in his life. Although he praised the architecture of the city writing a lot about it in his diary, to be honest, he also reported some delusion in describing Venice as filthy and run-down. Andrea and Laura were also extremely fascinated by the city and its lagoon: «There is so much to see that we are already late», they wrote on the Facebook page GoetheliebtItalien. 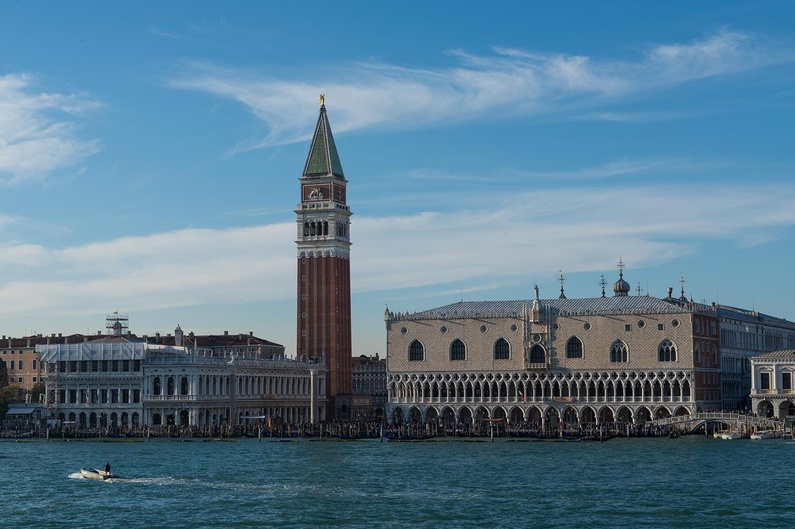 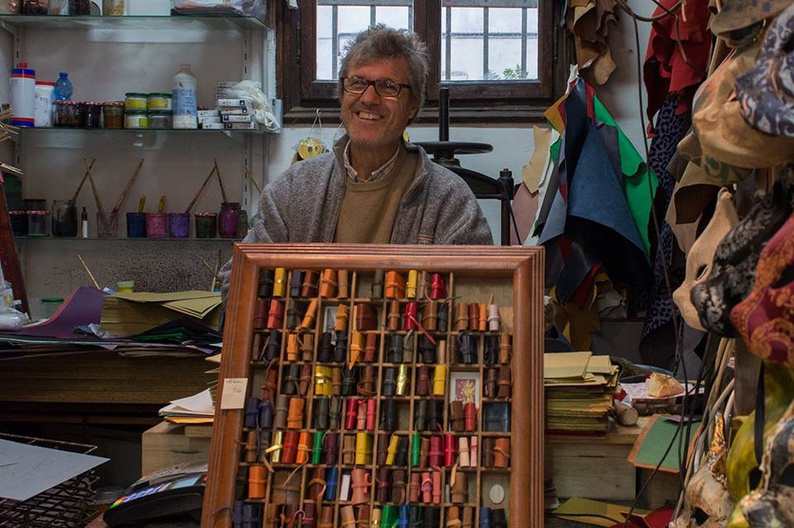 The journey continues direction Bologna, while the pictures taken by Laura and the posts written by Andrea keep the users live up to date using the hashtag #aufgothesspuren,  #goethelibtitalien and #EntdeckeItalien. Even though Venice had materialised as the dystopic image of a «Stroll along the canal overlooking a hotel room where a a man was lying on the bed in his gown and with a smartphone in his hands» (sic, from their Facebook page), it's in Bologna that the two travellers put themselves in Goethe's shoes after 2 centuries and a half: «Bologna, admired from the Torre degli Asinelli, surprised Goethe 230 years ago, the same way it keeps on surpring whoever climb it today», writes Andrea in a post. 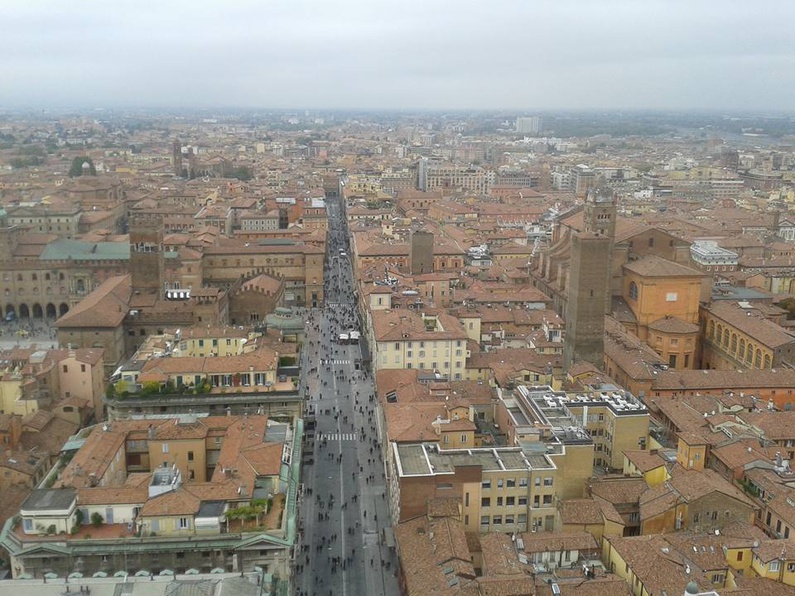 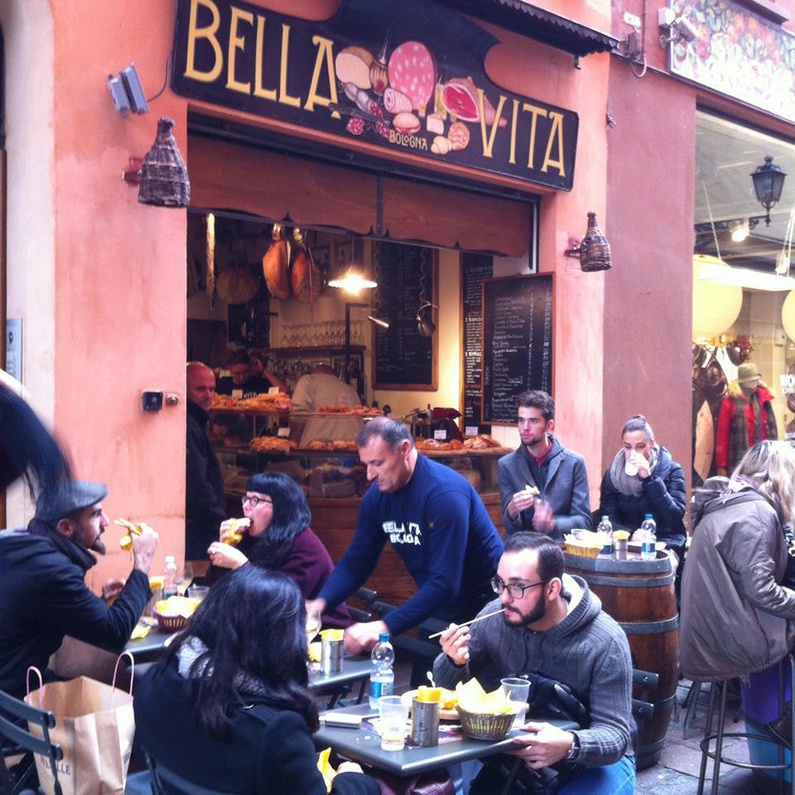 Eating in Bologna is surely not a problem, and among the most typical places visited here there is Senza Nome ("Nameless"),  the first bar in Italy thouroughly managed by deaf people where peace and chaos are magically mixed:  «It is very comfortable. From the outside, the Italian gesticulating melts with sign language, there's no difference at all. And it's beautiful.» We skipped Goethe's stop in Assisi: we only have a few days left and Rome, Caput Mundi, it's our next destination. This was a foundamental stage of Goehte's Grand Tour, as the poet visited Rome first from October 1786 to February 1787 and then, on his way back, even longer. He took part to the celebrations of All Saints' Day, although a bit disappointed by the austerity of the feast and by the personality of Pope Pius VI. Describing Saint Peter's Basilica in the Vatican he wrote: «It downed on me how art, just like nature, is able to trascend every possibile comparison». 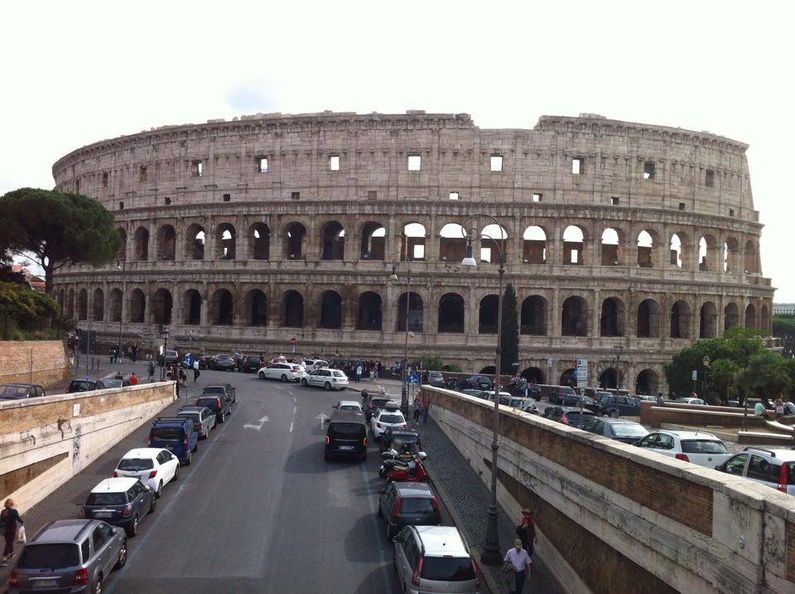 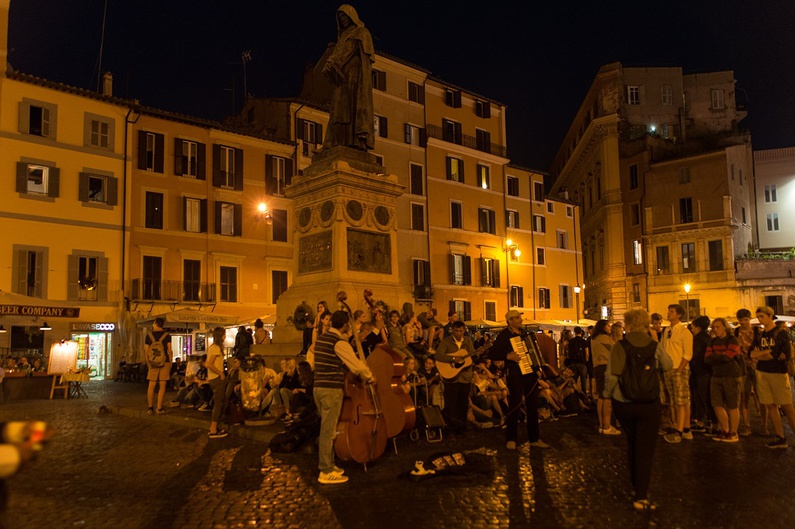 Naples, which Goethe defined "free, cheerful and alive", fascinated Andrea and Laura as well. If the German writer arrived in Sicily from Naples with a ferry, the two travellers did the same and, transporting their Fiat 500 on the ship, announced on the 20th October their arrival in the city of Palermo. 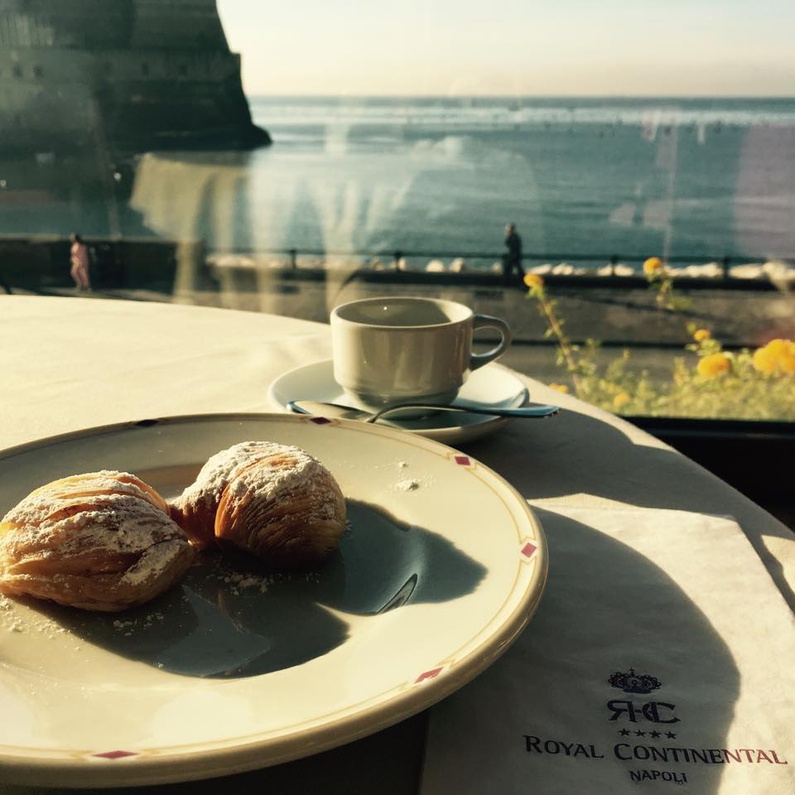 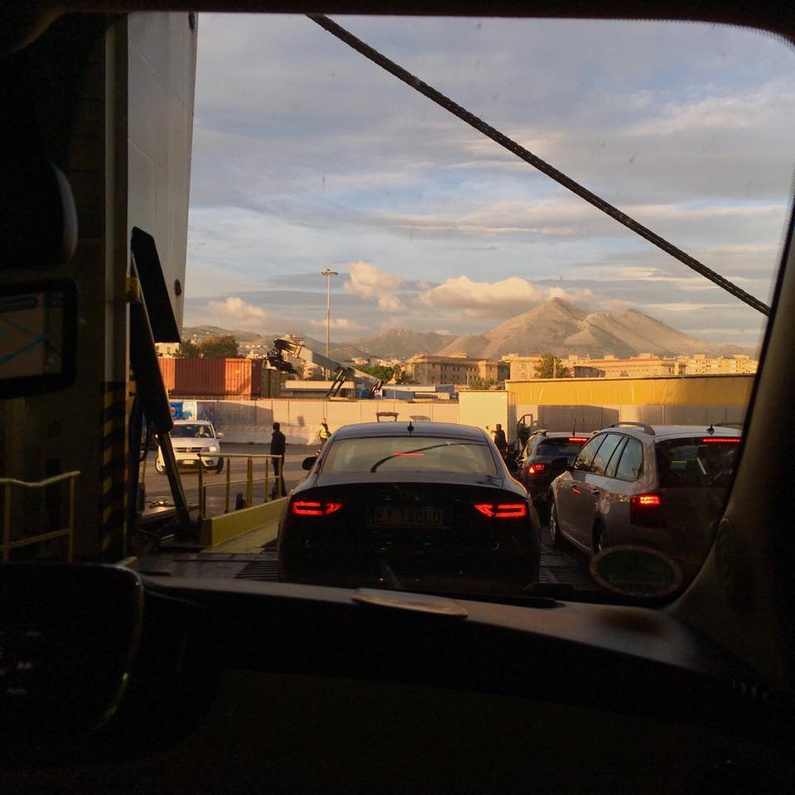 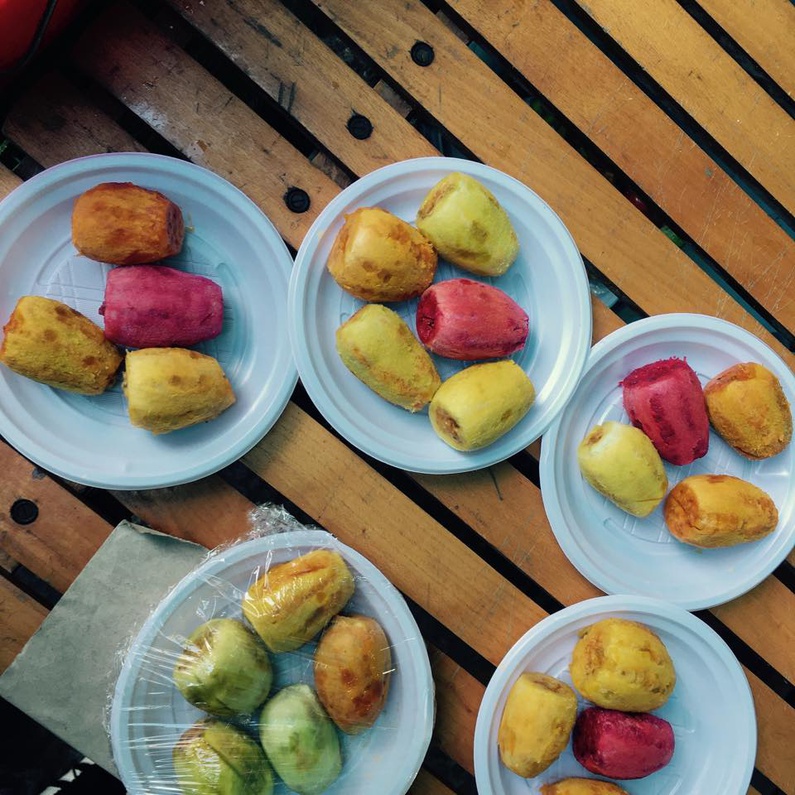 This city does not need any presentation: the beauty of the marble of Piazza Pretoria, the barock style of the Quattro Cantoni and the Cassaro Antico, the biggest figs and palm groves in Europe. This is what Palermo looks like. And how the singer Fabrizio Cammarata and the journalist and film-director Pif described it, also talking about his latest film we heard of even in Berlin. But that's not it: there is street food, colourful prickley pears and markets: «At the Ballarò market we bought a handful of tomatoes and wanted to eat them right away. When we asked the lady if we could have them washed somewhere, she gave us a very odd look. I had to explain to her that we wanted to eat them on-the-spot, that we were from Berlin, where you can pay for such tomotoes up to 12€/kg in some supermarkets, not exactly the price we were paying for there (90 cent). And they always taste quite like water, actually. So, she goes, calls the man from the bakery and gives him the tomatoes. In the blink of eye we were reunited with the now perfectly washed tomatoes. "How much is it?". "It's okay, enjoy" she replied with a warmth and motherly kindness that melted our hearts. We ate them in three minutes».

Reflections after the journey

Goethe wrote about Sicily: «Italy, without Sicily, would not leave in the spirit any particular image. It's in Sicily that we find the key to everything». In an interview, Andrea explained that to him Sicily is the key to a healthier life: if the standard of life in Italy is still very high despite all the problems, and it takes only a journey like this to acknowledge that many things are usually taken for granted, in Sicily the standard of life is even higher. However, according to Andrea we could interpret Italy in many different ways. It also struck him how Rome is somehow "able" to host such a mingled variety of young people coming from all over the peninsula, trying to be successful. 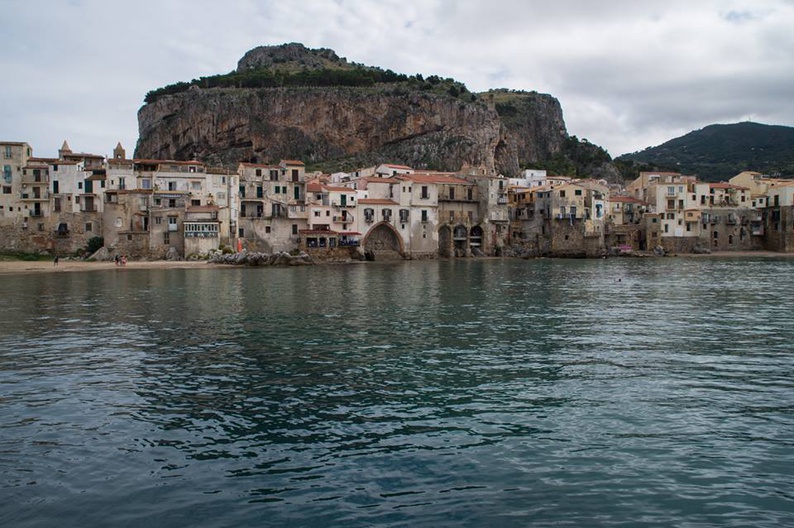 To conclude, we asked Andrea to tell us about the formative aspect of his journey to Italy. The one that took place 230 years ago profoundly changed Goethe, as underlined by writer Matteo Nucci: the character of Italians, their way of spending the evening together, seeking free time and pleasure surprised him. «This new freedom influenced in a more productive way Goethe's studies and medidations». Andrea, even though he highlightes positive atmosphere during the two-week journey, he reveals that this experience allowed him to increase his awareness of both Italy and Italians: «On the one hand there is the injustice of facing a difficult political and social situation, on the other, as a sort of compensation, a human warmth and a sense of creativity not common at all. The efforts and the dedication of the Italian people are way bigger than the frustration caused by the status quo,and this I reckon to be very important». 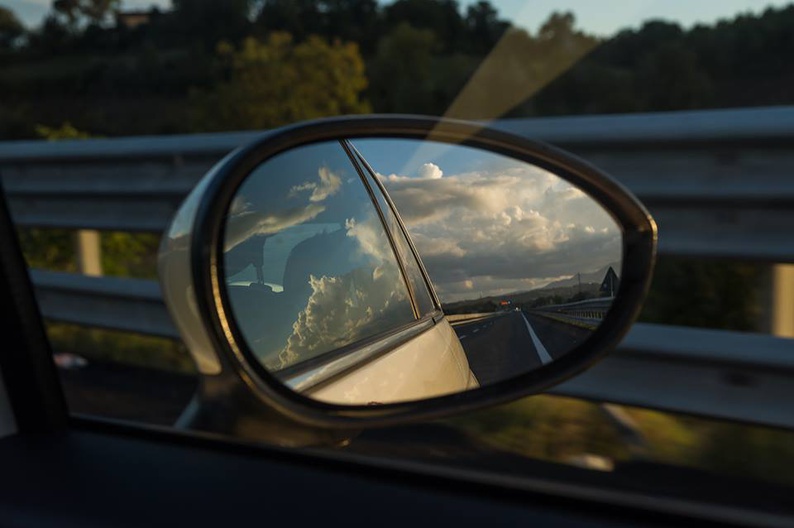