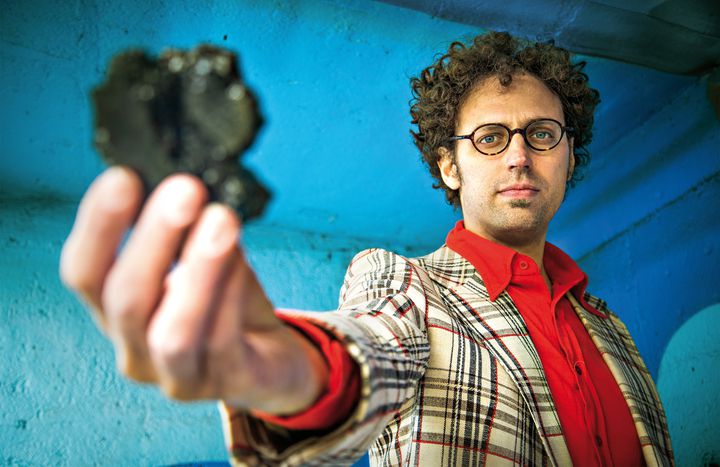 Interview with Giacomo Lariccia, the Italian émigré singer-songwriter who has lived for the past 14 years in Brussels and who has just released his third album Sempre Avanti ("Ever Onwards").

Rather than a singer in exile, Giacomo Lariccia prefers to think of himself as an émigré. After all, the biography on his website is written in three languages: Italian, French and Flemish. Because the story of the Rome-born artist is the journey of a generation that set out in search of the future armed with a suitcase full of hope. Suspended between two countries, his native Italy and Belgium, he was seduced by Brussels, that city "of everyone and no-one" and a meeting point of different cultures. Finalist and runner-up in the "best song" category at the Premio Tenco awards for the song Sessanta Sacchi di Carbone ("Sixty Sacks of Coal"), he talks about his third album Sempre Avanti and our conversation becomes an opportunity to go beyond music and talk about the joy of being alive, Italian emigration, the hopes and fears of a generation travelling far in their quest for the future, propelled - ever onwards, in fact - by just a hint of optimism.

cafébabel: You've lived in Belgium for 14 years now. Do you see yourself as a singer-songwriter in exile?

Giacomo Lariccia: In 'exile'? (Laughs). I don't see myself as being in exile, or on the run either. Rather, my situation is the same as that of many young people who live in a different country to where they were born. I'm an émigré. We're all migrants, although we started out with a laptop under our arm rather than a cardboard suitcase. From the human point of view, I am doing really well here, in a city that I fell in love with right away. I moved here in 2000 to attend the Royal Conservatory for a few months and then, one thing lead to another, I ended up staying for 14 years.

cafébabel: What's it like being a singer-songwriter abroad? Is there any room for Italian music? 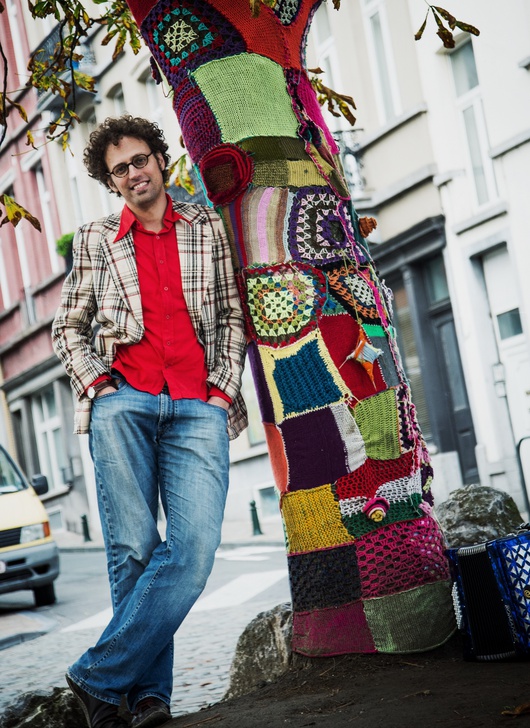 Giacomo Lariccia: Life here is a never-ending process of discovery. We've got a foot in two camps. I say "we" because I'm including my friend and producer Marco Locurcio in this. We're trying to do promotional work in Italy, but at the same time we're also playing between Belgium and France, which is another challenge. I'm often asked whether there's any room for Italian music and what kind of reception it gets. There's no room per se — you have to create it yourself, and that's something I'm also working hard to do.

cafébabel: Let's talk about the album. One of its most striking songs is Bruxelles ("Brussels"), an increasingly popular destination for young Italians off to seek their fortune. How did this song come about? Does it have an autobiographical element?

Giacomo Lariccia: Dedicating a song to Brussels seemed to me to be compulsory. The experiences related in the song are also my experiences over the 14 years I've lived here, because when I arrived, I was looking for my future and I didn't really know what path to take, so I came here to build that future. The song is definitely about a situation that will echo with many other people, because the future is built on a lot of little choices but also on sacrifices, self-denial and even a few setbacks. I love Brussels probably because it's the capital of a small country that's open to cultural offerings that aren't Belgian. When I published my first jazz guitar album, I remember that the culture supplement of "Le Soir" put me on the front page.

cafébabel: Sessanta Sacchi di Carbone... Why did you choose to write a song about the Marcinelle tragedy, a historical event that, although highly significant, happened so long ago?

Giacomo Lariccia: Sessanta Sacchi di Carbone is about the coal pact. Italy and Belgium got together and agreed to exchange workers coming from Italy to Belgium with coal going in the opposite direction. It was a pact that greatly humiliated the people involved, who felt like they were simply the content of the contract, sold for a pile of coal, which was the worth of  a human life. I'm greatly interested in the historical emigration of Italians to Belgium because its stories are ones of which we should be proud and because it kind of stimulated culture, politics and the world of work. And there's also former Prime Minister Elio di Rupo (his parents are originally from Abbruzzo in Italy — Ed.), who makes no secrets of his origins.

cafébabel: On the subject of all things Italian, what's your view of the Internet campaign against the use of "piuttosto che" ("rather") to express a choice between two mutually exclusive possibilities, like in the song of the same name on the album? Are you one of the people who believe that Italian has become impoverished?

Giacomo Lariccia: I found it greatly enjoyable, but grammar isn't the right place to start talking about Italy and the Italians. I posted this picture, asking for support and for people to get involved in the video. Then the Accademia della Crusca got involved, a newspaper published an article that has been shared about 30 million times on Facebook and, in just a few days, the whole thing had gone viral. We are still working on creating the video showing all the contributions we've received from people who can't stand this use of "piuttosto che" to express a choice between two mutually exclusive possibilities. It's amusing, but only to a certain extent, because although it's true that the language is changing, there's also nothing you can do about it (Laughs).

cafébabel: Who do you derive your musical inspiration from?

Giacomo Lariccia: I've taken a lot of things from a lot of people. For some time now, music has allowed me to live well and be happy. I haven't been able to stop listening to the new Damien Rice album (My Favourite Faded Fantasy — Ed.) for several weeks. It's blown me away, but I can't say how much it will influence my music. It probably will, as it's doing at the moment to my life. Another album I really liked was Ecco by Niccolò Fabi. And I think there's a trace of him in Sempre Avanti. The album is very intense, heartfelt and well presented, without ever being banal. Well, this is something that I've tried to reproduce. The art of saying a lot without ever turning didactic, while at the same time managing to be pleasant, light, able to provide moments of relaxation.

Giacomo Lariccia: The song does not pretend to be intellectual at all; it sets out to offer a bit of lightness. At the same time, there is an underlying idea. It's about those who can't accept the signs that they're getting old or enjoy being the age they are and living in the moment. I think it's a major handicap if you can't, because it's actually really great to enjoy your life at every moment. Me, for instance, I'm nearly 40 years old and I'm enjoying every single one of them; I've got a family and kids. Pretending to be 20 forever must be fairly sad.

cafébabel: Let's now turn to the Premio Tenco. What's it like to have got to the final?

Giacomo Lariccia: In truth, I had already made the final five once before in the "Best first album" category with my second disc Colpo di Sole ("Sunstroke"). But this year I was shocked —  literally —  to have come second and not even for the best first album, but for the best song overall (Sessanta Sacchi di Carbone —  Ed.), where I was up against some major established artists. I was one vote away from first place. I've never told anybody that, but it makes me very proud.

cafébabel: Talking of anecdotes, how do you compose your songs and write the lyrics?

Giacomo Lariccia: Usually I start with a basic idea, a desire to talk about something. And it's something that has to be clear in my mind at that moment. Sitting down to write and producing a coherent song is difficult, so I try to have some clear ideas and then turn them into a piece of music. Sometimes you can get an idea from a phrase, a word, a stimulus —  rarely from other people's songs. I can't just copy the structure of somebody else's writing. However, there are things in everyday life that make me say "I'm going to note that down." So I carry round a notepad to jot down a few words, a few phrases, a few little stories, which can then mature over several weeks, months or even years. 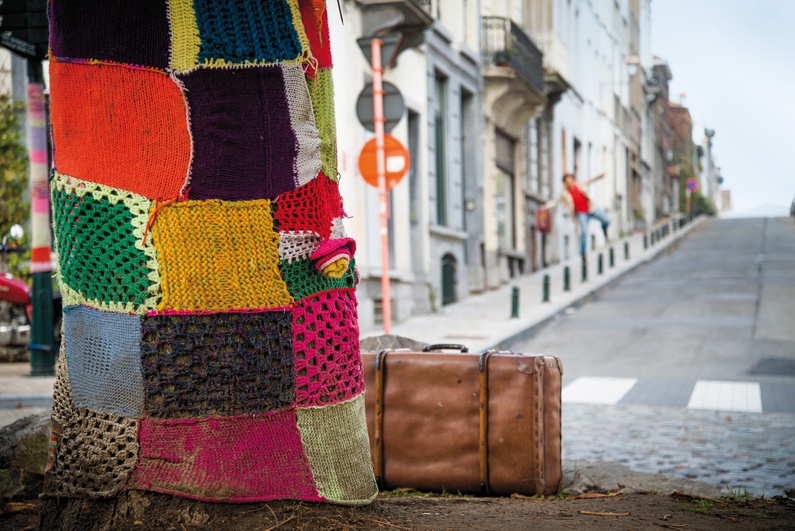 Giacomo Lariccia: Initially, it was simply about raising funds, not least because there were about 100 people working on this album. At the end, when the album was full, there was a track that had been left off called Sempre Avanti, which struck me as the best possible title. At a time when record production is in deep crisis, it takes a good deal of courage to make a new album, a desire to get involved and challenge the future. "Ever onwards" because you can't go backwards.