Ghosts from Sicily: Poggioreale, past and present

Chancing upon the ruins of Poggioreale, a ghostly legacy left by the Belice earthquake, is an experience which both enchants you and leaves you dismayed. It triggers wider reflections on what Sicily once was and what it is today.   Because, as journalist Sergio Zavoli said in the early hours of January 15 1968, "earthquakes cover many things and uncover many more of them".

Driving towards the beaches of the south coast of Sicily one late summer's morning, I decided to take the turning for Poggioreale, in the region of Trapani. The village was rebuilt further downriver after the terrifying Belice earthquake in 1968, which razed the settlements of Montevago and Gibellina to the ground and affected more than 15 villages within the valley.  The new Poggioreale, with its innovative and slightly pretentious buildings constructed when the village was rebuilt, seems devoid of the lively excitement which brings other more touristy Sicilian villages to life.   Street signs for places of artistic interest point insistently towards the ruins of the old town, so I take the provincial road which climbs over the hills, through broom and the leaves of Indian fig trees.

A decaying crèche in the hills

When the ruins appear in the distance, you are met with a vision of unsettling beauty: a decaying crèche in the hills, a true ghost town built from yellow tuff, whose colour is reflected in the water stagnating between the rocks.   A few signs discourage people from entering the ruins, but accessing them is actually quite easy, with only the blackberry bushes and the giant cobwebs seeming to want to keep you out.   Soon enough, you arrive at the foot of the Old Steps, once the site of bustling village life.  However, even then the inhabitants of Poggioreale were mainly women, children and the elderly, since young people and men went to mainland Italy, Europe and overseas in search of work. 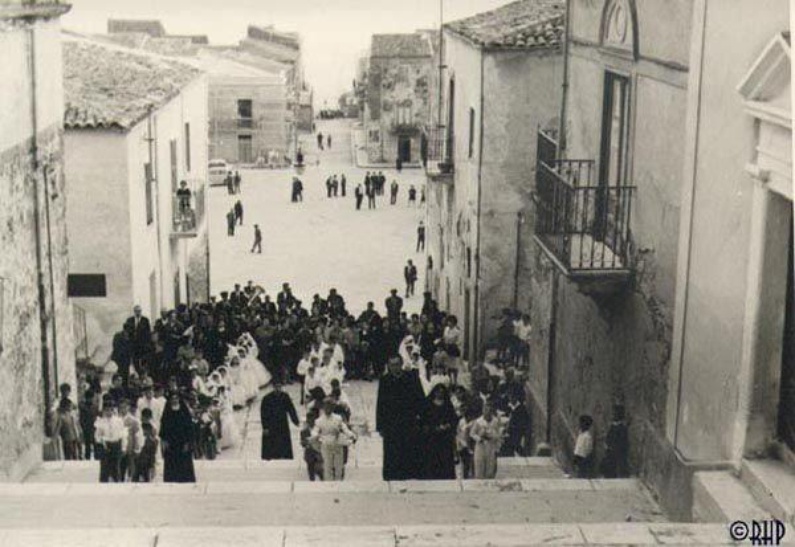 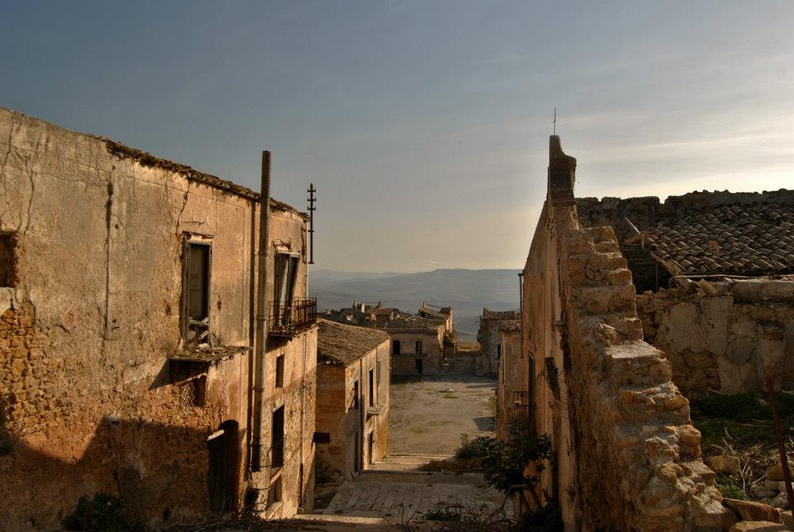 In the main square of this ghost town, I spot the remains of a bell tower and other, taller buildings, razed to the ground in a single night by a tremor with a magnitude of 6.1.  The tremor had an easy job striking the tuff, which gives the houses their distinctive colouring but has never offered protection and resistance in the face of similar catastrophes. 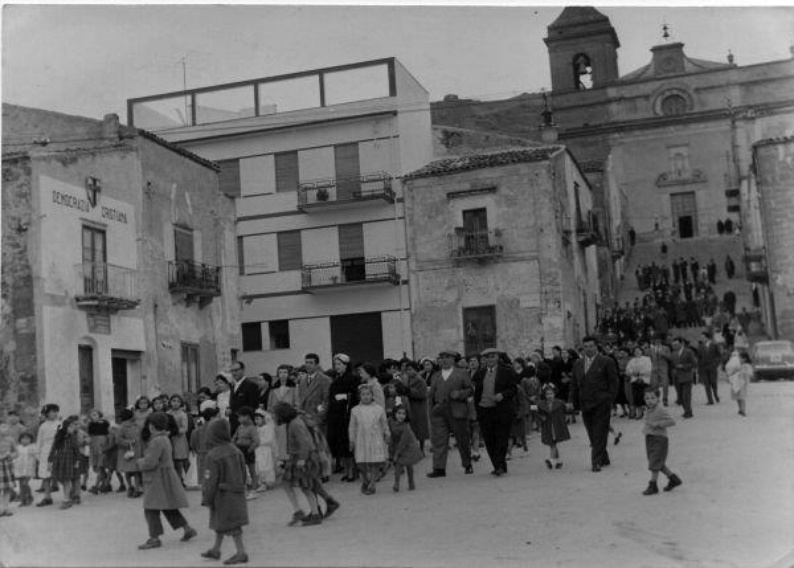 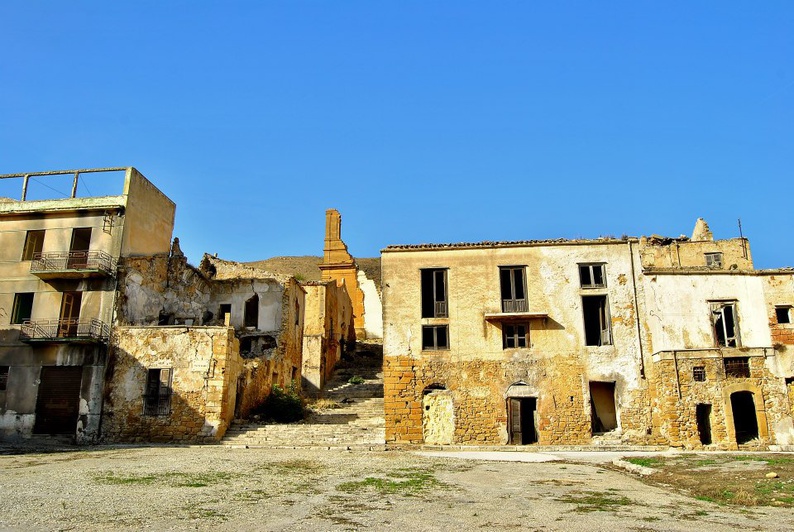 Not just a ghost story

The layout of the buildings, the door and window frames and the network of streets are still here, clearly recognisable, forever carved into the ground, even if they are overrun with plants and wild fig trees. Their fruit lies rotting on the ground, emitting an intense and slightly sinister smell.

But the ruins of Poggioreale bear witness not only to a ghost story, but also to skeletons - the skeletons in the cupboard of the government at the time.  It did not organise emergency aid quickly enough, underestimating the effects of the tremor and leaving the wounded under the rubble for several days.   The roads which led towards larger settlements collapsed into enormous chasms, true. The hospitals, far away and difficult to get to, were ill-equipped, agreed. But there was a lack of coordination, timing and leadership, with the exception of attempts to remedy the situation with official visits from the President of the Republic Giuseppe Saragat and the army being deployed, the air force talking of a “landscape of an atomic explosion".

Returning to the new Poggioreale, a little old man greets me, used to tourists.   We chat, and I come to understand that the reconstruction of the whole Belice Valley was not a very positive chapter of Sicilian and Italian history either.  The elderly residents still ask themselves why the useful Salaparuta-Castelvetrano railway line was not rebuilt, whilst other construction work was embarked upon instead, work which pointless at the time and still not much use today.   Another sore point was the bureaucracy and the slow pace of the rebuilding process, which were sided against by historic figure Danilo Dolci.  His "strikes in reverse" showed the authorities how to repair the roads thanks to the industriousness of volunteer farm workers.

Another dark chapter in the area's history is connected to the memory of this true disaster, symbolised by the Grande Cretto (Great Cretto).  Built by the artist Alberto Burri in Gibellina to commemorate the old city that once lay there, it is one of the most symbolic pieces of land art in Europe. 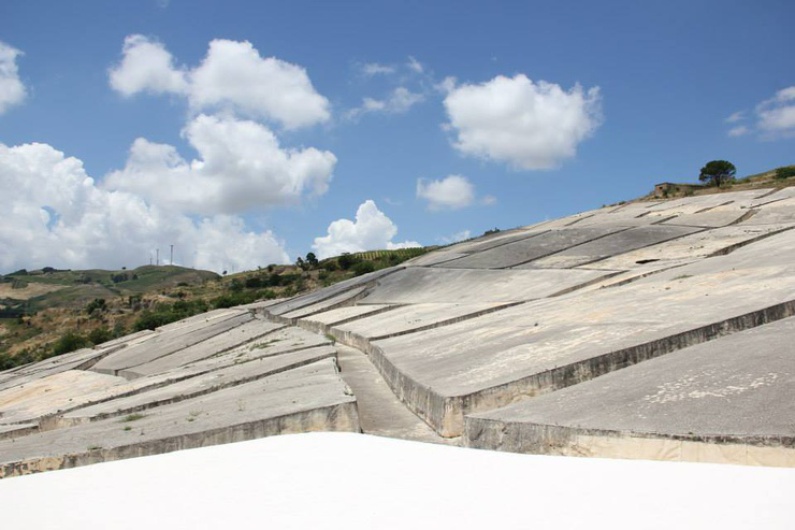 Today, this extraordinary site, as it has also been described in an online investigative report by Italian newspaper La Repubblica, is not only little known and undervalued, but is neglected and overrun with weeds.  It has been ransacked by malicious people, strewn with rubbish and is imprisoned by the steel blades of the wind turbines which rise up from the surrounding hills.  Perhaps the memory of the earthquake, along with all the consequent drama which followed it, is also slowly fading away.   And the rebuilt Poggioreale doesn't seem to be doing well either, with the population having decreased from 3,500 in 1981 to 1,500 today. Even now, just as in 1968, people must go elsewhere to find work, and the village is slowly emptying.

The day after the disastrous earthquake, on 15 January 1968, Sergio Zavoli, a journalist from Italian TV network RAI, said: "Earthquakes cover many things, and uncover many more of them." He was probably alluding to the difficult conditions in which the people of the Belice Valley lived, with inadequate infrastructure, dilapidated housing, men emigrating for work and and no support from the state. These are all ghosts which today are still rife throughout Sicily.