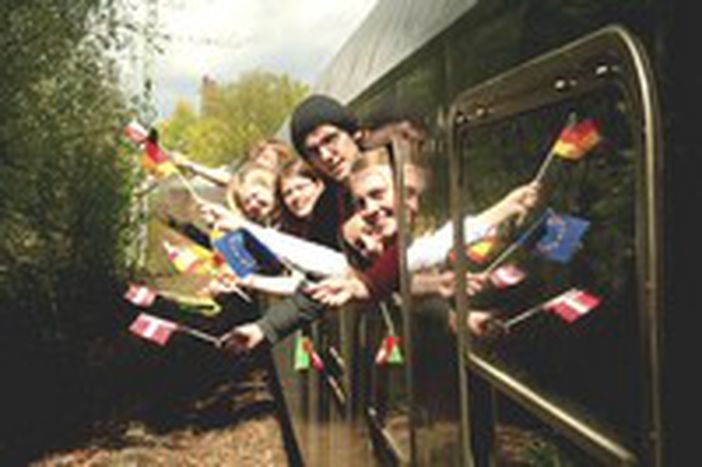 Get on the Europe train!

On April 24th a one of a kind train set off from Berlin on an eight day journey across old and new Europe; travelling on tracks of dialogue and discovery

8.53 am: Krakow central train station. The conductor’s piercing whistle announces the departure of ‘Train Europe 2006.’ Its journey is a celebration of the second anniversary of EU enlargement. Although the idea was first launched in 2004, it was only realised thanks to the generosity of private donors and substantial EU grants. According to the project’s coordinator in Poland, Anna Olszowska, its goal is to “facilitate dialogue between people living throughout Europe, including those who are unhappy about joining the EU.”

After stops including Budejovice in the Czech Republic, Maribor in Slovenia and Pécs in Hungary, the next destination is Zgorzelec, a town on the German-Polish border. Despite the early hour a lively atmosphere prevails in the train’s carriages. It’s a hive of activity as the passengers throw themselves into the day’s activities. “This is work, not entertainment,” declares one participant, Maria Graul. There are nearly a hundred passengers on the train, representing 13 nations, including Hungary, Czech Republic, Romania, Lithuania, and Belarus. The majority are young people who were selected to do individual artistic projects, all of which emphasise the importance of dialogue between European citizens. A German member of the organising team, Mélanie Henze, underlines that “we want to know our neighbours. Europe isn’t just the officials in Brussels – it is also normal people.”

In one of the train’s compartments sit young journalists from the German magazine Politik Orange. They are sharing their space with two silent students, deeply absorbed in their project. All of a sudden a mysterious figure with a Polaroid camera appears, taking photos that will then be stuck to the train’s windows. Matthias Nebel has called his project “Seize the moment” and he wants to capture the events of the journey on film and to immortalise not just the participants but also the towns they go through. Mélanie underlines how “there are so many emotions…it’s impossible to remember every minute so these photos are an excellent way to keep our memories of the trip fresh.”

At 10.30 am a discussion with political and scientific guests starts in a train carriage specially converted into a traditional salon politique. The discussion tackles the topic of “Where is Europe headed?” Amongst the passengers on the train there are politicians and representatives of various associations and NGOs. Agnieszka, a Polish woman who works in Vienna tells us that, “the idea is also to discuss, with political and literary figures, subjects such as integration and the future of a Europe of 25 member states.” The audience is a lively one and there are many questions. A Greek participant, Athanasia Rousiamani, brings up the question of Turkey’s accession to the EU. She shares some of the opinions that she has gathered from Czechs, Slovenians and Austrians in the towns the train has passed through. Her investigation reveals that only the Magyars (a Hungarian ethnic group) are favourable to Turkey joining the EU. Athanasia reports, with a hint of regret, that “certain people even reacted aggressively even though I was just asking for their point of view.” Madeleine and Christophe record the discussion and will then get the locals’ reaction to the tape at the next stop. Throughout the journey they have carefully edited these recordings in the ‘audiovisual’ compartment.

When the clock strikes noon the participants head for the restaurant car, where lunch is already waiting for them. A few people prefer to continue working on their projects rather than further lengthening the hungry queue. They are divided up to eat with others from their field – be it entertainment, cooking workshops, music, literature or theatre. Then they go through to the library/bar carriage to enjoy some dessert, a coffee, and discussion in small groups. According to Marta Gawinek, “we have tried to interview people of different ages and different social backgrounds. Every answer is a good answer – one interviewee even said Europe is crap.” Curious participants are now drifting towards the end carriage, attracted by the sound of instruments tuning up. The jazz musicians are rehearsing for the evening concert and hips start moving; the whole place is really swinging.

The journey is coming to its end. At 5.25 p.m. the train pulls into Zgorzelec station, welcomed by the local orchestra. Soon the participants will be getting off and going through the streets of this latest stopover, hoping to pass on information about the member states that the train has journeyed through. The organiser of the whole operation, Tobias Hipp, is delighted; “we have been very well received everywhere. But certainly the warmest reception was in Hungary and Slovakia. We weren’t expecting such an enthusiastic welcome.” On May 1st the passengers will make the last leg of the journey to Berlin, the end of the line for their artistic travels. In the German capital, itself an emblem of reunification, a panel of political and media personalities will be presented with the impressions collected along this most unusual of journeys.

Translated from Poci±g do Europy