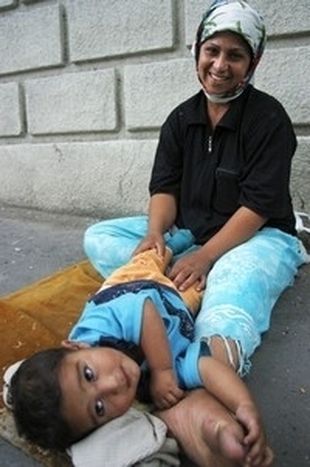 Women’s rights are neglected in the Caucasus, as illustrated in Tblisi, Georgia's capital

'First I was a slave to my husband, now I’m a slave to myself.' Tamuna Gachokidze’s weary eyes are downcast as she speaks. Despite the gravity of her words, her manner remains indifferent: she can no longer express joy or sadness. No words can do justice to her internal emotions, but at some point in her life she did manage to stop crying, developing a numbness to the pain she feels. For 18 years Tamuna suffered imprisonment, beatings, abuse and rape at the hands of her husband.

The 35-year-old's suffering is no isolated case. According to Lela Gaprindashivili, a sociologist at Tbilisi University, 50% of married women in Georgia endure the same fate. 'They are victims of violence in the family. There are numerous reasons for it, but the most common are alcohol, unemployment, poverty and the existence of traditional gender roles.'

As a self-confessed ‘broken woman’, Tamuna never felt the courage to function outside of her home. That is until one evening when her husband hospitalised her with broken ribs and open wounds. The turning point was reached, and Tamuna filed for divorce. However, one year on, the mother of two no longer knows who she is and has no chance of finding work. The few belongings she gained from her divorce have long been sold to provide her with some kind of subsistence. In stark contradiction, divorce is still taboo for women, but men come out of the other side socially untarnished and free to remarry.

'Laws which protect the female population are numerous but are often not enforced,' critiques Eliso Amirejibi, Regional Director for the 'Union against Violence Towards Women in Georgia' in the Tblissi area. Her title sounds to a certain extent like a power that she doesn’t have and which only her physical presence can confirm.

'The police fail to intervene when a women is attacked,' continues the 40-year-old lawyer. 'In Georgia, it’s culturally unacceptable to interfere in the private sphere. The incidences where women’s rights are abused are seldom reported to the authorities.' Rape is considered a trivial crime and within marriage, the view amongst Georgian men is that it is their right to do what they will with their wives.

The Union headquarters are in an old sports hall. Plaster flakes from the damp walls, the linoleum flooring is lifting away from the ground and the facade displays large cracks. Like everywhere in this city, the marks of the earthquake which struck 3 years ago are still ever present. Little money exists for repairs and renovations and neither the city nor the state support the Union project.

'Women can expect very little from the Georgian state,' says Eliso Amerijibi. Fathers are not forced to support children fathered out of wedlock, and women have no claims over their former husbands after divorce.

Being the breadwinner for her children and husband, Nona Aldamova-Dshapharidze is a typical career woman. Born in Pankisi-Tal, the 39-year-old daughter of an intellectual family converted from Islam to Christian Orthodox and moved to Tbilisi to study gynaecology, despite being pregnant herself.

Five years ago, Nona founded an organisation for troubled women. As she explains: 'After the break-up of the USSR, the economic situation of Georgia worsened significantly. As unemployment grew, so did the rates of violence amongst poverty stricken families. Many men are no longer in a position to support their families adequately, and their frustration and disappointment is often vented through violence.'

Foreign support for women's activists is hard to come by. Only the Americans appear to play a role. 'Abroad, many still believe in the old Communist propaganda that celebrated emancipated women as part of a new society free from the exploitation of capitalism,' criticises both Aldamova-Dshapharidze and Amirejibi independently of each other.

For Amirejibi, European aid would be much appreciated. 'We run the only women’s shelter in Georgia, and the costs to maintain it are pretty high.' The condition of the interior is a clear testament: bare concrete steps, a complete absence of carpets, splinters of paint jutting from the banisters. The emergency telephone rings in the office. A sobbing female at the other end crackles from the receiver. Amirejibi moves to a neighbouring room to begin the council.

On a worn out mattress sits 16-year-old Lela, who refused to give her surname for fear of being traced. One of seven women who currently call the shelter ‘home’, her story is a tragic one. As an illegitimate child herself, she was rejected by her own mother and lived with her aunt until the age of 12 when she finally returned home. In a few weeks however, she will have to leave the shelter: her three month stay is nearing an end. Chances of returning to her family are non-existent. Four months ago, she fell pregnant, but by the time the gynaecologist confirmed it, it was too late to schedule an abortion. Consequently, her mother threw her out of home without a word and or coin in her pocket. For days she lived in a church in the city centre before the priest handed her over to the police, who then delivered her into the care of the Union shelter.

Posters of American film stars adorn the wall of her room. The sad ceiling above her bed is embellished with little stars. But Lela is no longer a child: she’s stopped dreaming.