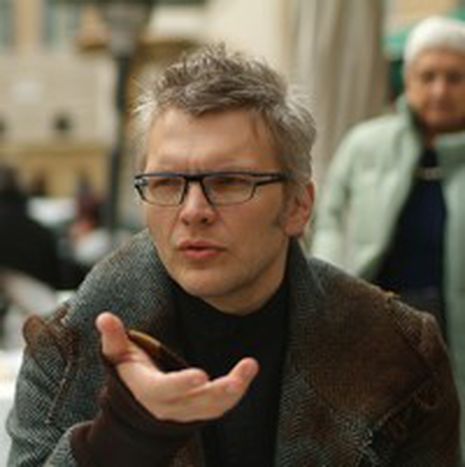 Gediminas Urbonas: 'There were no real Communist ideas in occupied Lithuania'

The former Soviet soldier, 40, has spent half his life sculpting in Lithuania’s evolving public spaces, prodding the West into understanding what the face of Communism once looked like, and fighting privatisation

Gediminas Urbonas is absorbed in paperwork at the brunch table in a bookshop-cum-coffeehouse not far from the Lithuanian parliament in Vilnius. He’s dressed in camouflage colours – perhaps a careless throwback to the Soviet soldier that once was. The Vilnius Art Academy alumnus only graduated in 1994, ten years after beginning his studies, after being ‘forced to leave university’ to serve in the army.

With the period of transformation in Lithuanian society and independence in 1991, Urbonas ‘rehabilitated himself’ as one of the country’s foremost contemporary art sculptors. Upon his return, the former soldier created a network of artists all over the world. Shortly after the fall of the Berlin wall, he started exploring the post-Soviet transformation of Lithuanian society alongside his wife Nomeda.

Vilnius has been the Urbonas’ base for over a decade. Well known among art professionals worldwide, his eclectic, modern work has been exhibited all over Europe.

‘My consciousness as a citizen and as an artist coincided with political proceedings,’ says Urbonas, shifting his paperwork onto the shammy leather jacket lying next to him. ‘And my art is inevitably bound with political content. ‘The authorities were frustrated during perestroika (Soviet leader Gorbachev's planned restructuring of the Soviet economy in 1987). Until independence in 1991, everyone was scared of the KGB (Russian secret police from 1954-91) monster.'

'Whilst all this was going on, I was developing art organisations and other public platforms - the government at that time allowed you to do a lot of things!’ Urbonas goes on to exclaim, his voice raised. ‘No-one could even imagine that the 'system' then was very weak. In fact, there are more obstructions for designing public platforms by artistic means these days.’

Urbonas quickly found that his ‘hardware’ category of art, where he works with buildings to fight Lithuania's privatised economic development, was less enthusiastically received by both authorities and business people. ‘They weren’t interested in the ‘content’ of the houses being built.’ Vilnius city council objected to his spring 2005 art space, Pro-test Lab.

It was set up in a privatised cinema called Lietuva, after Urbonas used Pro-test Lab as the forum to encourage 7, 000 citizens to sign a petition and preserve the last independent cinema from demolition. ‘For me, it was the best representation of the interest of Vilnius’ cinema lovers. But the council considered the people unimportant and accused me of ‘simulating’ the public interest to keep the building.’

Another public platform that the sculptor created in 1995 was Geležinis Kablys (‘Iron Hook', as an alternative place for young people to meet. But his art approach developed into a more of a ‘software’ line. ‘Studying the content of public spaces and the intersections of various interests there eventually became more important to me than working on buildings.’

‘I was never a lonely genius of modernism, tucked away at home and busied creating something that would never become public. As a sculptor and a citizen, I am very happy to keep challenging constructions. And I always worked as part of a team.’ At the moment, the Urbonas husband-and-wife team are organising the flight of white pigeons from Venice to Rome, in the 'International Pigeon Race'. ‘We wanted to reassess the Western perception of Communism in post-Soviet countries.’

‘We re-moulded Communism in order to get power, infrastructure and money. Most of us were Communists in order to help Lithuania.’ By approaching the Venice Biennale contemporary art exhibition with the peaceful request to give back the ‘Villa Lituania’ (pre-war Lithuanian embassy) to its owner, we will also tell the world that there were no real Communist ideas in Lithuania throughout its occupation.’ I question whether the content of that building is so important - there have been no active Lithuanian Communists occupying it since 1940.

But Urbonas is already standing. ‘Our project might reassess the Western attitude to post-Soviet people,' he says, sliding his jacket on. 'Lithuanians can reach out to and educate Europe on our history, especially through the culture scene.’ He invites me to meet him in Rome, to wait for the pigeons. And without waiting for a response, he disappears back onto the streets of art and protest.