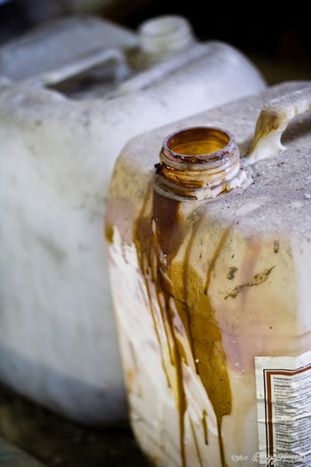 GBL: party drug gets you high in your garage

On the weekends, this industrial solvent goes by the name 'liquid ecstasy'. From internet forums to TV chatshows, France is in uproar about the cheap stimulant you can buy in your local grocery

There’s a new drug - and you can find it in your garage. GBL, or ‘gamma-Butyrolactone’, a powerful industrial solvent used for cleaning car wheel rims, appears to turn into a derivative of GHB, the ‘date rape drug’, when ingested.

GHB is classed as an illegal narcotic and has been banned in the US since 2001. Widely used in industry, its household counterpart GBL is sold over the internet at an average price of 70 euros (£62) a litre. ‘Recreational’ use of this solvent has apparently been around for a while on the showbiz and party scenes, and also in American and European sporting circles, where it was used for muscle building. Since the beginning of 2009, this phenomenon has boomed as this product became freely used as a low-cost stimulant, earning it the moniker 'liquid ecstasy'.

Depending on the amount taken, the known effects go from euphoria and loss of inhibitions, to deep sleep or even a comatose state. The prospect of inadvertently getting high on household substances is alarming enough, let alone the possibility of destroying yourself on them. In France, this has provoked a discussion on whether to ban GBL. After all, it's intended for cleaning your car wheel rims and not your oesophagus!

‘Adding GBL to the list of illegal narcotics is unimaginable’

There is a clear need for governmental intervention on this subject. Well, we can dream. While smokers are vilified (remember that smoking kills), criticised, classed sometimes as polluters, other times as responsible for the hole in the ozone layer – when they are not simply considered half-dead and living on borrowed time – are cleaning freaks getting ready to live their last moments of freedom? Imagine the scene: it's Sunday afternoon, a forty-year-old is quietly going about disinfecting, scrubbing and shining the wheels of his car…when he gets hooked on the fumes and helplessly caught up in a downward spiral of inadvertent drug abuse. Where will this lead? Could your favourite grocer end up in prison for trafficking illegal drugs? Police stations will certainly be full if the entire population ends up in prison due to the possession of household products.

We’re not there yet in Europe, and especially not in France. According to the government's mission to fight drugs and drug addiction (‘Mission interministérielle de la lutte contre la drogue et la toxicomanie’, MILDT), ‘due to the fact that it is used in large quantities in industry, adding GBL to the list of illegal narcotics or controlled substances is unimaginable in this country.’ Despite all this, GBL is on the list of products to be monitored. Whether to bring back or halt altogether the sale of GBL because of its illegal consumption is to be discussed by the administration of harmful substances. It's also likely to bring in a consumption penalty of up to 15 years in prison.

So, will Mr Muscle be banned since it can make you high? Perhaps we should ask researchers to come up with a product made from new, anti-toxic chemicals … There’s certainly a need for them!