For the first time, Poland and the Baltic states signed a historic deal to build a gas pipeline as part of an effort to halt Russia’s energetic dominance in the region. This was celebrated as a major step towards the Energy Union proclaimed by Juncker when assuming the Commission’s leadership.

President of the Commission Jean-Claude Juncker witnessed the adoption of the grant agreement on the GIPL (Gas Interconnector Poland – Lithuania) between the leaders of Lithuania, Latvia, Estonia and Poland. “Today we have done much more than bringing the energy isolation of the Baltic States to an end. We have brought the region further together. Today we have agreed on European infrastructure that will unite us, instead of dividing us." said Juncker. As for Poland’s Prime Minister Ewa Kopacz, “I do not exaggerate when I say that this is a historic moment. Poland has achieved a strategic and very important goal. We have gas independence,” she said.  However, the scenery does not seem so bright to Poland as it may seem. According to the South Front, the so far only supplier, Qatar, is part of the contract in which the price Poland will pay is a lot higher than the price previously paid to Russia. “The price of Qatar gas is 2.5 times higher than the one offered by Russia – 700 and 265 dollars per one thousand cubic meters correspondingly, as the analyst of “Alpari” Anna Kokoreva told us,” reported the South Front. Nevertheless, Moscow will see its sphere of influence significantly reduced in Eastern Europe regions, as its ability to use its natural gas as a political tool will be dismissed.

According to the Financial Times, in practical terms, the work on the infrastructure will begin next year and its conclusion is expected by 2019.  The 534km GIPL pipeline will run from Rembelszczyzna, in Poland, to Jauniunai, in Lithuania.  The annual capacity of the pipeline is estimated to be 2.5bn cubic meters, possibly growing to 4bn.  Its over-all cost is €558 million, which will be funded by the Baltic States and private investment along with the Commission’s contribution, under the Connecting Europe Facility. 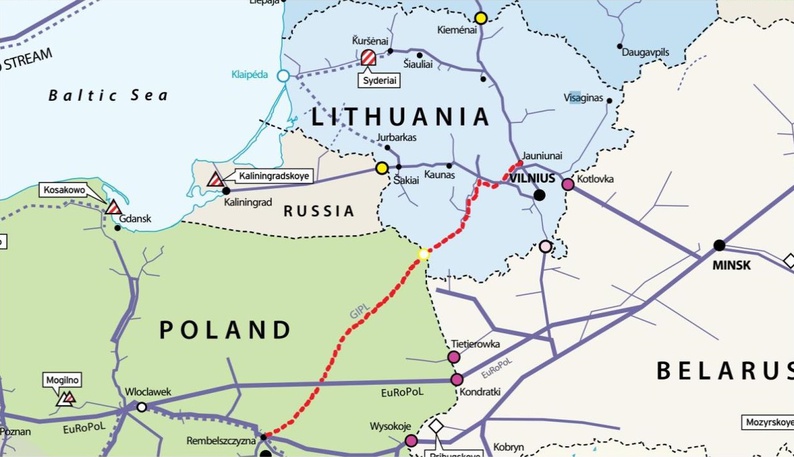 A crucial element of the EU's Energy Union plan is reducing the dependence on fossil fuels and reducing greenhouse gas emissions. However, uncoordinated national policies remain a hurdle for real market integration. Established under the 2030 Framework for Climate and Energy, the Energy Union is based on three main pillars: security of supply, sustainability and competitiveness.  The EU imports 53% of the energy it consumes, which raises concerns regarding supply security. Following Russia’s annexation of Crimea, the EU imposed sanctions on Moscow, with the latter intimidating smaller Central European countries by using its gas reserves as a trump. Back in May, Energy EU leaders and representatives went on the pursuit of possible new suppliers, exploring new supply regions for fuels, but until the present moment, no deal was agreed. In late September, MEP Gianluca Buonanno presented a motion for a resolution following the agreement between Ukraine and Russia on supply gas. On the official statement, Buonanno calls on the EU to withdraw Russia’s sanctions, calling it a “strategic mistake”, considering Russia’s quasi-monopoly of energy reserves.  Moscow, in turn, has allegedly signed a gas deal with Pakistan, a 1,100 kilometer gas pipeline with an annual capacity of 12.4 billion cubic meters, to connect liquefied natural gas (LNG) stations in the Pakistani city of Karachi. "The construction of the North-South gas pipeline is bringing economic cooperation between Russia and Pakistan to a new level,” said Russia’s Energy Minister Aleksandr Novak. However, bad news for consumers is on the loom, with the IMF assuring a raise in gas tariffs.

The LNG is one of the primary alternatives to Russian pipeline imports, and according to POLITICO, most of Europe’s LNG imports come from Qatar, Algeria and Nigeria. However new opportunities might be on the horizon, after ENI, the oil and gas multinational, had discovered a supergiant gas field in the Egyptian offshore, in what seems to be the largest reserve ever found in the Mediterranean.

A bright but uncertain future?

Former Soviet republics until the early 90s, the Baltic countries are very vulnerable to supply disruptions, therefore, diversifying energy sources away from Russia has become a vital element of each of these countries' national security plans. With the deal sealed, the EU leaders believe an integrated energy market is a step closer, hoping to lead to greater market efficiency and to producing affordable prices for consumers. Even though some reactions remain skeptical about this political and economical venture, the construction of several interconnector pipelines between Poland and the Baltic states will further advance their leverage over Russia, yet we can’t foreseen what long-term consequences of this investment will mean to Poland and the Baltic states.