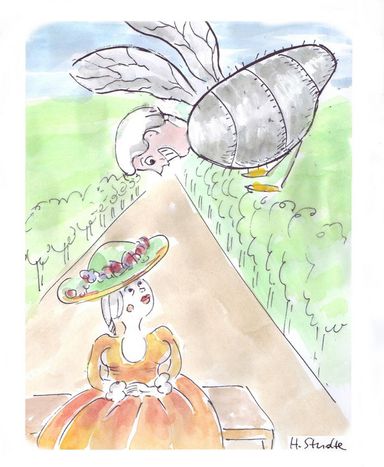 When the US president killed a fly in a live CNBC interview on 17 June, it got the whole world buzzing. Will his fellow leaders be all a-tremble when they meet in L'Aquila, Italy, on 8 July? Roundup of the weekly expression and its European counterparts

If you look like you wouldn’t hurt a fly, it's because you're of an unequivocally gentle character, unable to harm the tiniest thing. Big, impulsive hands - whether they belong to the president of the USA or not - are unwelcome, no matter who you are in Europe, from France: faire de mal à une mouche, Germany: er könnte keiner Flige etwas zu Leide tun, Spain: No haría daño ni a una mosca, Sweden: ej göra en fluga förnär, to Latvia: neizdarīs mušai pāri.

Yet one of the most famous morals from Aesop's fable is: don't trusta wolf in sheep’s clothing. Is Obama sending an indirect message as he meets fellow G8 leaders in Italy? L’habit ne fait pas le moine - the clothes don’t make the man, as the French and English aphorisms go - you can't judge someone on their appearance. The French also surmise that under the mastery of their nerves is un loup à l’apparence de brebis (a wolf that looks like a lamb), echoing the Spanish saying: es un lobo con piel de cordero (a wolf with lamb’s skin).

Speaking of sheep, in the era of the Sun King, flirty women would amuse themselves by sticking on false moles to break up the pure whiteness of their peach skin (peau de pêche): this mouche or 'fly', as they called it, was supposed to attract men like flies to a pot of jam (comme des mouches sur un pot de confiture) in the court of Versailles. If the gentleman in question seemed like a big, fat disgusting bumblebee, then a woman could tell him to go make a fly, as in the German expression Mach die Fliege - buzz off! in alternative English. Fans in hand, the flirts of the court who faisaient mouche (made flies), managed to hit bullseye and sift out the right suitor from the inferior pests.