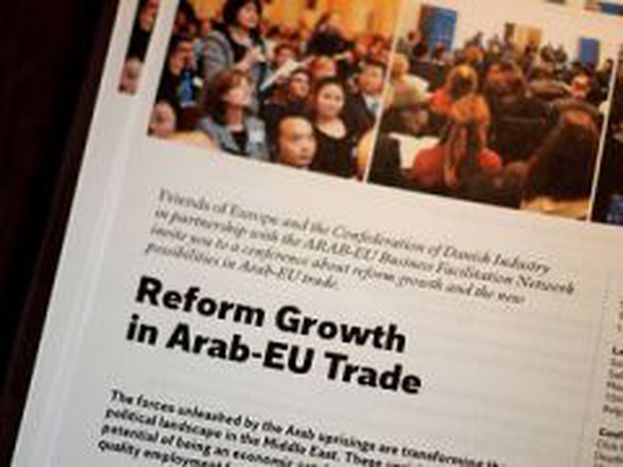 From the Atlantic to the Persian Gulf

By Aris Kokkinos To boost growth between the EU and the Arab world is the ambition of many public and private institutions, both in the West and in the East. On December 4, Friends of Europe and Dansk Industri organized a meeting whose purpose was to pave the way in this direction. Since the beginning of the Arab spring, economic growth evolves sometimes faster than political reform.

The debate, moderated by Shada Islam, has confronted the views of four representatives of the EU with those of stakeholders coming from four Arab countries.

On the European side, Louis Telemachou, Cypriot Ambassador to the Political and Security Committee, has mentioned the efforts of the Cyprus Presidency of the Council to strengthen the links between the EU and its Arab partners, concretized by a trade agreement with Morocco. Peter Balas, the Hungarian deputy director of DG Trade, explained the need to reach similar agreements with the Arab world as a whole, and at first with Tunisia, Egypt, Jordan. On both sides of the Mediterranean people wish to deepen trade, diversifying it: agriculture, but also services and high tech. MEP Sajjad Karim stressed the importance of the political factor in all economic negotiations. The EU/Egypt Task Force, of which he is in charge, is a concrete example: nor Europe knows if its ambitions will be reached in the Mashreq, neither President Mohamed Morsi knows if he can deliver his promises. Alar Olljum, Estonian advisor to the EEAS, believes the EU has a new deal to offer its Arab partners: before the Arab Spring, the priority was development, now it’s the economy. Thus the changes have convinced both EIB and EBRD to invest in the region.

On the Arab side, the former Algerian Minister Ahmed Tibaoui (Arab-EU Business Facilitation Network) points out two elements: first, the EU is in crisis, and that changes the degree of its involvement in the Arab world; second, it matters to focus on the private sector: the company must be at the center of the debate. Fadel Allabadi (Jordan Europe Business Association) stressed the need of educational development, recalling that the EU-Jordan Agreement, initiated in 2002, is a key factor of it. Ilham Zhiri President of the Women's Network for Mentoring/Networking, noted that 70% of women are in a situation of poverty in her country, Morocco. Equality of rights between men and women remains a demand to fulfil. Last but not least, Abdul Rahim Hassan Naqi, Saudi Secretary General of the Federation of the Gulf Council Chambers of Commerce, spoke of the strengths and expectations in the relations between the Persian Gulf countries and the EU. A free trade agreement between the EEC, now EU, and the Gulf Cooperation Council exists since 1988, yet the businessmen of the region are still struggling to get visas to Europe.

The Mediterranean Sea unites and separates two shores whose destinies are linked. It is in the interest of these two worlds to find a common ground, which would be beneficial to both sides.