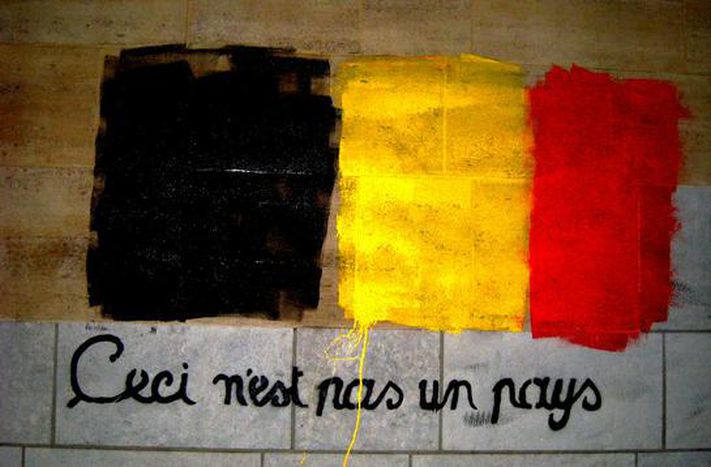 Being Belgian means living in an undefined place, without an identity, a language or a unique border. Belgium is an open country, strongly multiethnic. From Bruxelles plurielle which is the title of Akro and Julie Rens’song to the Anversa Nouvelle Carthage cosmopolitan city of merchants and sailors. Here the Art Nouveau of the Avenue Louise mingles with the arab markets of Mérode and Gare de Midi. In Schaeerbek white and freckled Belgians live with Moroccans and Turks for more than 40 years.

Belgium is the country of contraddictions. Of Herge’s Tintin and of the Fleming nationalist Bart de Wever. Closed, xenophobe, catholic from an anti-Muslim perspective. But it is also the open-mindedness of a city as Bruxelles with a strong multiethnic vocation. Where you can speak four, five languages without surprising anyone. Where you can be atheist, Christian, Muslim, Hindu without causing reactions of indignation or false interest. Where after all, you can what you want beacuse your uniqueness merges well with the extreme diversity that distinguishes this city.

During the academic year 2012-2013, thanks to professor Paul Aron’s course littérature belge all’ULB - Université libre de Bruxelles – I discovered a new reality. The idea of this course developped in this way: from the francophone literary edges to the obsession for the centre symbolized by Paris and Gallimard and then coming back to the promotion of the local; of Belgium but also of Québec and Switzerland.

Bruxelles was and is a froncophone suburb but it i salso a big centre, the centre of the old continent, the city symbol of the European Union. That European Union which has never went out of history because it has never got in.

Belgian literature borns with Georges Rodenbach and Emile Verhaeren, two francophone Flemings. Then it has developped with the idea of ame belge, Belgian soul. Writers and poets begin to wonder if there’s only one Belgium and what characterizes it. The centre remains Paris but the country of frites starts asking questions to itself, starts examining, knowing itself. Histoire éxecrable d'un héros brabançon  is the identity experience of a francophone living in the Flandres.  With the myth of Paris the boy lives the vicissitudes of the great journey toward the Métropole. A kind of Illusions Perdues  Belgian version, where the irony and the ambiguity lived by the main character are the touchstone of Belgian culture’s success beyond the francophile, catholics and conservative manias.

The colonial experience helps, the other is necessary to define themselves, their own limits and qualities. Simenon and Hergè study Congo’s experience to understand what does it mean being Belgian during the Europe of ‘20s, ‘30s and ‘40s. The Musée de l’Afrique Centrale  of Tervuren becomes a study site for several intellectuals during those years. The outcomes are different but the awareness of itself and of its own role in the world increases. Belgium, even through immoral actions, opens up to the world. Paris starts losing its “popularity” compared with Bruxelles, Liegi, Anversa, Bruges, Gent. But confusion remains, the Belgian isn’t neither French nor German, he begins to feel himself as European maybe also to avoid his doubts and fears.

In 1977 Pierre Mertens published Terre d’asile, the story of a boy who escapes from Chilean tyranny and finds refuge in Bruxelles. A novel in search of his own identity. The trait d’union between the Belgique, the âme belge and the belgitude.

We used to talk for a long time about négritude. Belgians didn’t lose the chance to appropriate for themselves this concept changing it into belgitude, starting to mock themselves, to ask themselves what they really were.  Joined together by  surrealism to get away from a reality which was more and more difficult to seize. Belgians didn’t exist, their identity, cultural and linguistic borders  too much open to yield to banal definitions. So they doscovered to be Wallons and Flemings, francophones and not, Europeans and Africans. They had to accept the undefinable being of a place and of a culture that after all rejects any descriptions because it would be too much strict, incomplete, artificial. Bruxelles returns to be what it’s always been,a  refuge land. And the all country regains its own trasnational and transcultural vocation.

Belgium is the country of  stateless persons, of cosmopolitans, polyglots and eradicated.