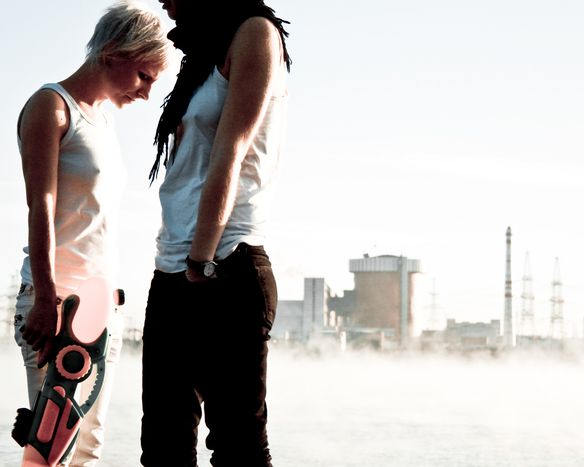 "French Greens Should Vote for Nuclear"

[Expresso] François Hollande affirmed last Monday: "France is exemplary in the matters of ecology" during an interview on French radio. Rather than decrypting what this means, let's question the choice of nuclear energy in a country that uses it most in the world, second only to the United States.

Many countries make the choice of using nuclear energy, from Belgium to the United Arab Emirates,  and the new situation of the energy panorama of the world opens up interesting new perspectives for the atomic industry. Our neighbours up North that were to begin shutting down two reactors have just prolonged the life of Doel 1 and Doel 2 by 10 years. In the Emirates, where 2.8 millions of barrels of petroleum are produced per day, the first reactor was supposed to return to service starting in 2017...

Can we free ourselves from nuclear energy?

France exploits the second largest system of nuclear energy in the world after the United States. While many plants have had their lives extended on the other side of the Atlantic, the lifetime of French plants is fixed by a visit from the Autorité de Sûreté Nucléaire (Authority of Nuclear Safety), the ASN. During the upcoming decennial visits, many installations will see their operational lifetime rise, making nuclear energy 50% of the energy produced.

At least this is what Didier Migaud, the socialist president of the financial jurisdiction, affirms. In 2012, he noted that at the "end of 2022, 22 reactors out of 58 will be forty years old. Within the hypothesis of a forty-year lifespan and electro-nuclear production being maintained at its current level, there would be a considerable short-term investment effort that seems very unlikely [...] an implicit decision has been made, and it is already committed us: to prolong our plants beyond their forty years lifespan"

It's actually the decision of the ASN that fed the controversy of the Fessenheim file. While the government has spoken of the possibility of closing an Alsacian site, ASN lengthened its production life, which drove the EDF (the French government-owned electric company) to begin renovation work. Since this, François Hollande assured on Monday, January 5th at the microphone of France Inter, that the Alsacian nuclear plant would close. This commitment sounds like a confirmation, since this was one of his campaign promises.

No incompatibility between climatic change and nuclear energy

Yet, according to Miroslav Lipar, director of the Department of exploitation safety of the AIEA, the French industry obtains very good results in safety examinations. After the Operational Safety Review Team or "Osart," the International Agency of Atomic Energy, or AIEA saluted "the EDF's respect of international standards." These are all signs that support the ASN's decision and brings into question the president's words.

As to what concerns dismantlement, France has a high level of technical expertise. As the American Nuclear Society's president, Donald Hoffman, explained recently, the French standardisation is a considerable asset. Incidentally, out of the 12 reactors already decommissioned, 9 are currently being dismantled. According to the Cour des Comptes, this project has already been funded.

Finally, in an opinion column of the newspaper Les Echos, the scientist Jean-Marc Jancovici explains briefly why "the environmentally friendly must vote nuclear". According to him, just like the experts of the GIEC, "the environmentally conscious should, in all good logic, be against global warming and for nuclear."