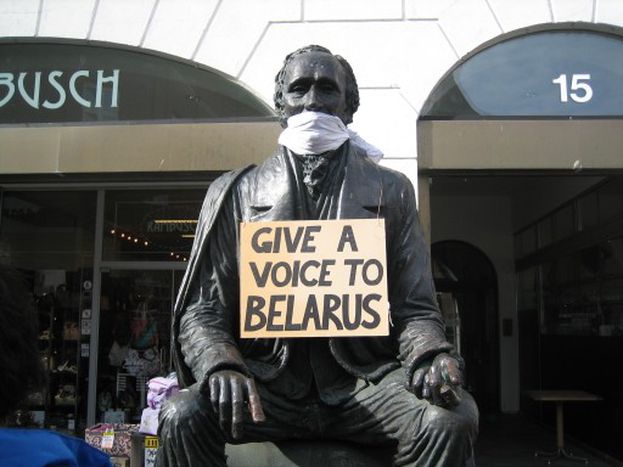 Free Belarus Action – as silent as a loud voice for democracy

Just 3 days prior to the presidential elections, inside Belarus the message is not easy to ignore. From Ottawa to Buenes Aires, from Tirana to Stockholm famous monuments are going quiet, while banners are expressing demands such as “Free Belarus”, “Give a Voice to the Citizens of Belarus” or simply “Give a Voice to Democracy”.

It is us, young people, who are determined that we can change the world we live in if we work together across borders – young people who refuse to close their eyes to the violations of human rights, the oppression of activists, the prevention of free media and right to assembly as well as the harassment of civil society inside Belarus.

The massive Belarus action is already having its 6th edition. It was before last presidential elections in Belarus that we decided to make as much noise as possible across Europe to give attention to the situation in Belarus, which was largely unknown, but also to show a strong support to the civil society in Belarus and to demand action from our European leaders. We thought that, if we could make an attention-grabbing action simultaneously across Europe, and make the action so easy that everyone could spontaneously join in, we could really achieve this. First year we were amazed to include 25 cities, but the year later the number grew to 60, 80 and last 3 times we could count over 100 cities on 4 continents worldwide! 100 cities is more than you could even imagine – it is as if you counted statues instead of sheep to fall asleep, but it would never end.

Every year more and more young people are joining in and spreading the word, NGOs and MEPs and Belarusian opposition leaders are giving their support and we have also built up a tight cooperation with the youth civil society inside of Belarus. And, as a great side effect, the action has inspired activists of all ages; how simple it can be to make yourself heard using innovation instead of money and strong beliefs instead of infrastructure. I have the feeling that even if we stopped organising this action, it is so strong that it would now continue of itself, since it is now so well-known and so big.

And the message has been heard. Hundreds of articles have been written about the action in Russian and Belarusian media in the past years. Radio interviews, TV reports, but also schoolbook chapters and prestigious prizes have been won. Last week we already started to feel the attention in Belarusian independent media and we are working with many organsiations and people in Belarus to spread the message of this action, together with all the pictures, across Belarus.

The JEF Free Belarus action shows the solidarity among youth across Europe and across the world and their willingness to take action. And, above all, it shows that there is nothing that can stop this, and that, despite disastrous EU visa regimes preventing young Belarusians from travelling, and despite oppression from the Belarusian state, young people in Belarus and in the rest of Europe will always have a common project for freedom, democracy and European integration.

I was chatting some days ago on Skype with an activist in Belarus who has supported us in every Belarus action in the past 6 years. He summed up that his entire “life looks like one big Belarus action!” And the point is that, whereas we could safely go home yesterday night, possibly told off by the police and surely cold and frozen, our friends in Belarus who have just e-mailed their pictures have to go home in fear. Fear of being caught, fear of being recognised in the pictures, fear of being expelled from universities or fired from jobs, of being arrested or even tortured. It is in solidarity with them that we took to the streets tonight in over 100 cities worldwide. It is to never forget their work that we have continued to do this over the past 6 years and will continue for the years to come – until the day Belarus is truly democratic.