It took Marine Le Pen all of 90 seconds to rip the European Union to shreds in a televised presidential debate on Monday, in front of an audience of 10 million people. The silence from the other candidates was deafening. [OPINION]

On Monday evening, "Le Grand Débat" brought together the five best-polling candidates in France's presidential elections: Marine Le Pen, Emmanuel Macron, François Fillon, Benoît Hamon and Jean-Luc Mélenchon. In the day that's followed, many have tried to pick a clear winner, or someone who at least made it through the show relatively unscathed. The French do love their post-match analysis. But few have had much to say about the one real injury in overtime. Carried out on a stretcher, Europe has once again come under fire in a political program on French telecision in prime time. Nearly 10 million people tuned in to see the gimmick du jour. In 2017, Europe is no longer the underdog in public debates, but the punching ball that extremist parties pummel with gay abandon.

While the other candidates drew up their plans for France in their best writing Marine Le Pen used her final 90 seconds in front of the camera to go to town on the EU, methodically making her way through all the arguments that populists usually reserve for the Union. All the greatest hits were there: "The European Union binds us, restricts us, torments us, and each time we want to use a measure of common sense... we're forbidden from doing so. Surrendering to the will of technocrats in Brussels is not independence. Independence is deciding for ourselves." The response? Silence. "Le Grand Débat" ended with Jean-Luc Mélenchon talking about "virtue", economic forces and war. 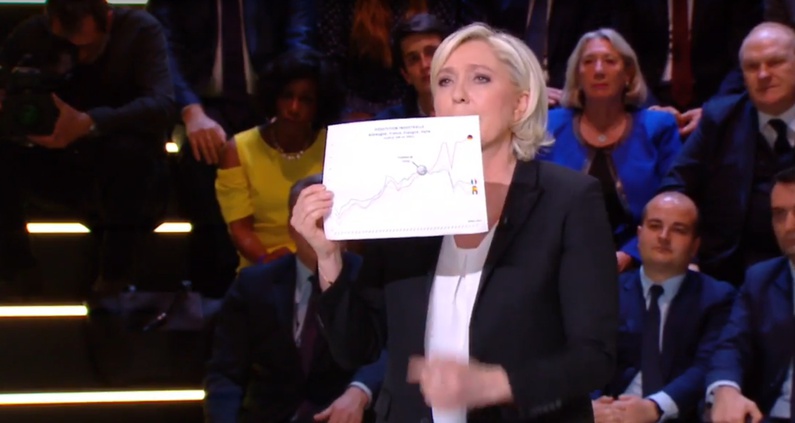 Marine Le Pen's declarations resonated across the airwaves, and not a single candidate or journalist on the stage questioned her. In three hours of debating, the FN leader was the only person to even mention Europe. Brexit? "Formidable." France? "A deputy for Angela Merkel." The EU? "It forbids everything." A moment later, Le Pen was brandishing a graph which showed the decline of industrial production in France, Spain and Italy after the adoption of the single currency. The repsonse was an embarrasing silence from the other candidates, and a quick change of subject. The EU wasn't mentioned again until Le Pen's closing remarks.

Why is it so difficult to defend Europe? Setting aside the odd weak outburts from Macron on Brexit, or Fillon on the euro, why did the supposedly pro-European candidates struggle so much to find an answer for such Europhobic remarks? Why, each time we're told outright lies and unflattering stories about the EU, do we hear only silence? The arguments being peddled by the FN in France, like the arguments of UKIP in Britain, or the FPÖ in Austria, or AfD in Germany, or the Northern League in Italy, or the Dutch PVV, are so easy to discredit. But every misinformation remains unchecked, which is particularly galling when fact-checking is so in fashion right now. So why, with 10 million people watching, did the people running to lead the second biggest power in the EU do nothing to help it?

On the eve of the 60th anniversary of the signing of the Treaty of Rome, in the middle of a European crisis and at a time when Marine Le Pen is closer to power than ever before, it's maybe the only question worth asking.