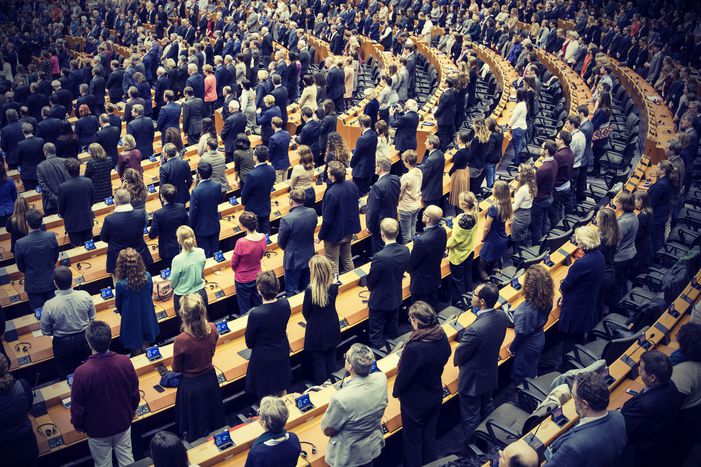 Paris called for military support from the EU states and invoked the Treaty of Lisbon on Tuesday evening to counter the terrorist threat. New methods are needed in the war against the IS terrorist organisation, write some commentators. Others point to the risks associated with activating the mutual defence clause.

France's appeal to the EU for military aid is understandable but unwise, the centre-left daily Süddeutsche Zeitung argues: "Anyone who wants to show solidarity with France after the terror in Paris should fight alongside France, Hollande has urged. That doesn't have to be in Syria. France has soldiers in many crisis areas. ... Invoking the mutual defence guarantee laid down in the EU treaties is the only way Hollande can be sure he will get quick and substantial military aid on other fronts. However the situation will be much more critical should the French government at some point call on Europe to support its war against the IS in Syria. Denying assistance would mean leaving an attacked ally in the lurch. Germany, France's closest ally in Europe, cannot and should not do such a thing. At the same time, however, there is no consensus in Europe on whether violence is the right approach against the IS. ... For that reason Hollande's decision to invoke the EU 'casus foederis' could prove a mistake: if things come to a head it will divide - and paralyse - Europe." (18.11.2015)

Paris was right to invoke the mutual defence clause because Europe needs new answers to respond to the IS threat, writes the conservative daily ABC: "For the first time in history a terrorist group is controlling, governing and managing a territory with a population and economic resources. The political and police-based schemes used against conventional terrorist groups active in Europe like the [Basque] Eta, the [Irish] IRA, the [Italian] Red Brigades or the [German] Red Army Faction can't be applied here. Europe is facing new security threats and the answers to these challenges will force it to give up the habits that have allowed a group of fanatics to sow terror in the streets of Paris. Yes, this is a new war."(18.11.2015)

The centre-left daily Tages-Anzeiger compares the advantages of an EU alliance with those of a Nato alliance: "A novelty in Brussels: the EU has activated its mutual defence clause for the first time ever. However, it's not yet clear what concrete help France is expecting. The symbolic gesture is more important anyway. And the EU can't offer much more than that; it doesn't have its own armed forces. Compared to Nato's mutual defence clause which was activated after 9/11 the EU version is at most a mutual defence guarantee 'light'. In a state of shock immediately after the Paris attacks there was talk of invoking the Nato clause again. But that debate is off the agenda. … What is really needed is a political solution to take the ground in Syria and Iraq from under the terrorist organisation's feet. The EU mutual defence clause allows Russia to continue participating in the Syria talks in Vienna. If Nato had got involved the Russians would no doubt have left - the result of a reflex left over from the Cold War." (18.11.2015)

By having the mutual defence clause activated Hollande has secured a lot of room for manoeuvre, the liberal daily La Stampa observes: "President Hollande had a good reason for invoking (at least for now) Article 42 of the EU treaties rather than Article 5 of the North Atlantic Treaty: he wants this declaration of support by the EU to give him the legitimacy he needs at a political and legal level. He wants to have free rein to intervene in the variable coalitions that are forming - with the US, Russia, and the regional powers. This double-track approach - unilateral and European - is typical of the politics of Paris, allowing it to gain the support of its partners while at the same time preventing any potential EU restrictions on France's international decisions." (18.11.2015)