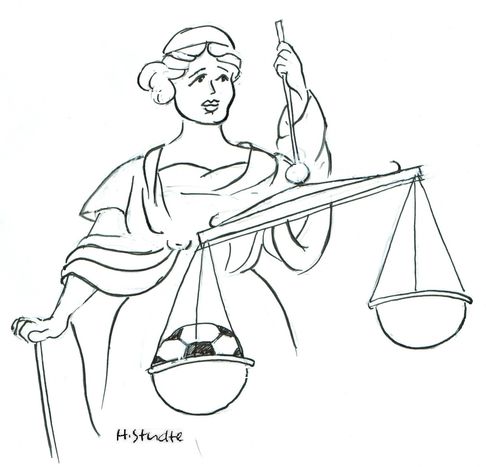 UK LANDLADY USED GREEK SATELLITE FOR GAMES! screamed the headline; a British woman convicted of using a cheap European channel to let her customers watch football. Now the European court of justice is 'on the ball'. Read the story in football expressions

It all kicked off when a landlady from Portsmouth was sued for showing premier league football in her pub in 2008. She had played away from home, using a Greek satellite card, Nova, rather than paying the hundred of pounds for an official subscription. It all sounded like Greek to the European court of justice (ECJ), where the affair went after the landlady lost the case for a fine of £8, 000 (6, 806 euros) before an English court. The ECJ has gone into extra time as it debates whether the exclusivity of national broadcasting rights is illegal. German advocate general Juliane Kokott, has helped the defendant score a goal for the European team by speaking up in favour of the move.

Kokott says this would otherwise violate the freedom of services in the European union. One happy clappy BBC television correspondent describes it as a 'European way of watching football', falling head over heels for the enlarged concept of a single European market, freedom of movement and goods. But rights holders like the premier league are ready to tackle, unhappy at the prospect of selling to cheaper, pan-European broadcaster. As the media jokes, it's only half-time for discussions on intellectual property rights in general. Best discussed over a pint of Mythos, perhaps.