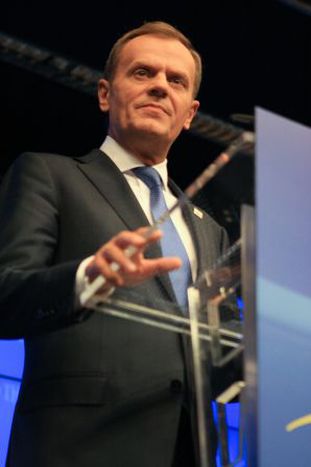 First commitments from Team EU: what kind of help can we expect?

Par Lisa Kittel Photo: Davide Martinotti “Common resolve” and “spirit of solidarity” – O.k. – but what else? Today the PolishPM Donald Tusk was presented the state of preparations of the Euro Summit. Some things did move since Sunday!

The banking package, measures to restore confidence in the banking sector, is seen as necessarily needed and there will hopefully come some concretization about when the heads of state will present the result of this a little bit uncommon summit.

The Euro zone countries want to ensure the medium-term funding of banks in order to avoid a credit crunch. Last one denotes that banks would only give out fluid money with a high interest rate. Private enterprises though need them because it means a quick and direct investment possibility.

So which concreter measures will be presented this night to ensure the flow of credit to the real economy?

As a second step within the backing package, the quality and quantity of bank capital should be enhanced.

Concerning term funding, bank liabilities would be required. Therefore the ECB short-term funding would be available at the ECB and national central banks. This way, one can limit actions of banks with which they want to old bank credits.

Also, the EU doesn’t want to follow the 2008 exemple when liquidity schemes were setted up. Rather there shell be reached an “truly coordinated approach” regarding entry criteria, pricing and conditions at EU-level. There is a road agreement on requiring a significantly higher capital ratio of 9% which means that banks are asked to increase the qualitative, more stable part of their capital.

Banks should first use private sources of capital which includes several actions for exemple the restructuring and conversion of debts. Only if necessary, the government will provide support, and like announced before if this is not available (which would be a very bad sign) the EFSF should work this recapitalization.

Last but not least, any form of public help will depend on the state aid crisis framework as it has been indicated by the European Commission.