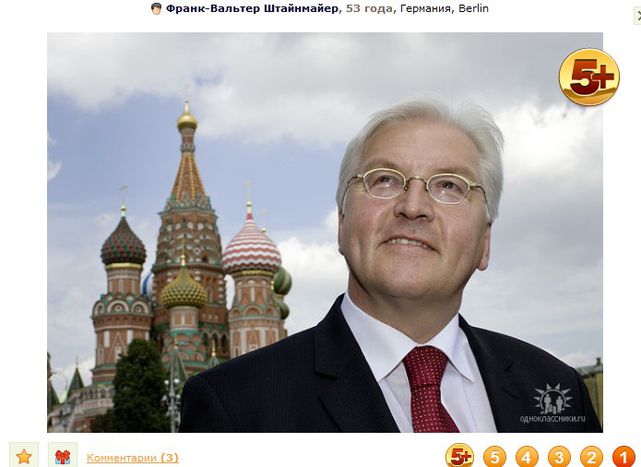 Since early September, the German opposition candidate has had a profile on the Russian e-community network Odnoklassniki.ru, which translates to ‘classmates.ru’. The social democrats are looking for the Russian vote in Germany, which mainly voted for the incumbent CDU party in the 2005 elections

At the very least, the German opposition candidate Frank-Walter Steinmeier has got the best vote for the photos that he has published online. He’s got a ranking of 5, which is Russian is the equivalent to 10. But the 37 million users of the online Russian community Odnoklassniki.ru don’t all feel the same way about Steinmeier’s politics. Many of the users are Russian-speaking residents in Germany; there are more than 17, 000 members in the 'Odnoklassniki in Germany’ group. In the meanwhile, the chancellor’s opposition has 85 friends, three photo albums and is part of 26 groups, including ‘Free Germany’, ‘Nazis NO!’, ‘Man and Woman’ and ‘Russian Banjo’ (Freies Deutschland, NEIN den Nazis!, Mann und Frau and Russische Banja). 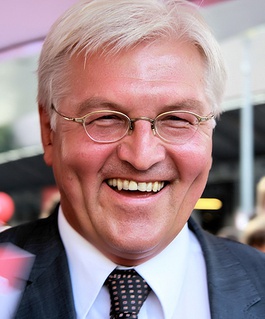 Steinmeier’s profile status as of 16 September is written in perfect Russian: ‘These elections are not about deciding the future of the parties, but to get Germany out of the crisis!’ Meanwhile, there are more than 220 comments posted on the candidate’s wall. Alexander criticises Steinmeier’s social democratic party: ‘Since the SPD have been in power (as part of the coalition – ed), the people that I know have been more worried about their future. All that thanks to the SPD.’ However Tatjana, 29, reacts in the spirit of her namesake in Puschkin’s Onegin with a declaration of love: ‘Dear Steinmeier, I wish you victory in the next elections’. At the end of the comment she has posted a heart-shaped icon. Steinmeier replies eighteen minutes later: ‘Many thanks for your support, Tatjana!’ Some users are far more ironic: ‘Dear electoral team, will you be answering our questions and complaints with as much vigour after the elections too?’ Others follow this lead and doubt openly that it’s even a real profile: ‘Just as much a fake as Frank is,’ comments user Natalija on a photo of Steinmeier.

But the profile is not a fake, according to the SPD press department. ‘We created it ourselves,’ they state. A small part of Steinmeier’s team in Berlin have the task of updating the page. ‘We’ve been working in this social network for ten days and we have more than 1, 000 users. We receive so many letters that we cannot even count them, but we make sure we reply to them all,’ says a member of the team. There’s no other page devoyed to Frank-Walter Steinmeier in any other language, seeing as the Turkish voters are informed via the many Turkish-language medias in Germany. The Italians, like other Europeans, often use mostly the same media as the Germans do.

A social network for each community 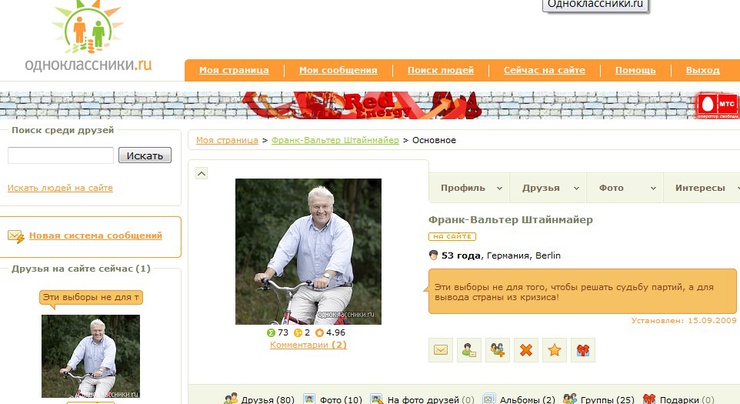 Steinmeier’s Russian profile has a more personal touch than the one on studiVZ, the German version of Facebook for students and graduates. The German page lists a series of party congresses, press conferences and electoral events. However the Russian page shows Steinmeier, the football fan, Steinmeier, the chef, Steinmeier, the child, Steinmeier, the young adolescent... His profile photo shows him mounting his bike with a huge smile on his face. ‘Each text and each photo is published by Steinmeier himself or by one of his collaborators with the clearing of the executive committee of the party,’ says a member of the team. The SPD are aware that in the last elections, the Russian German citizens mainly cast their vote to the CDU (christian democratic union). The German social democrats are thus strengthening the contact with newer generations.

29-year-old Russian German Andrej Steinke, from Berlin, is sceptical. 'Just because Steinmeier has a profile on Odnoklassniki doesn’t mean that he is interested in the problems of the Russian Germans. It just shows that his election team works professionally and will use every opportunity to get more votes.’ The Steinmeier page hasn’t convinced Steinke, unlike a 30-year-old Odnoklassniki user from Düsseldorf. Writing under the name of Poker Face on Steinmeier’s wall, she says: ‘Dear Herr Steinmeier, you have my vote!’

A report from n-ost correspondent Olga Kapustina. N-ost is a writers network based in Berlin