In the Greek capital, a small but determined Jewish population strives to uphold a tradition dating back over 2000 years. In the context of austerity and political change, young Jewish Greeks have a new wave of problems to contend with; yet despite a growing trend of emigration, the city hosts an active youth contingent – including the rabbi of the Athens Jewish Community, just 26 years old.

Syntagma Square, the site of much of the recent upheaval in the centre of Athens, is surprisingly quiet this Thursday morning. Here I meet Dimi, who has agreed to show me the city’s Jewish landmarks. Born in Israel to a French-Greek mother and a Greek father, Dimi moved to Athens at age seven. Now 24, he’s lived in Italy since 2011.

It’s February, but the Mediterranean sun beats down on the ruins of the Parthenon, built in the 4th century BC. Less than 100 years later, the first Romaniote Jews came to Greece. Nowadays, it’s Sephardic Jews, who fled to Greece during the Spanish Inquisition, who dominate the Athens community.

Life before and after

As we move away from the Acropolis, the tavernas and souvenir stalls become less frequent. Here, the city placed its Star of David-shaped Holocaust memorial, only inaugurated in 2011. "Finally," Dimi laments. Athens was the last EU capital to formally commemorate the Holocaust, which killed an estimated 87% of the country’s Jews. 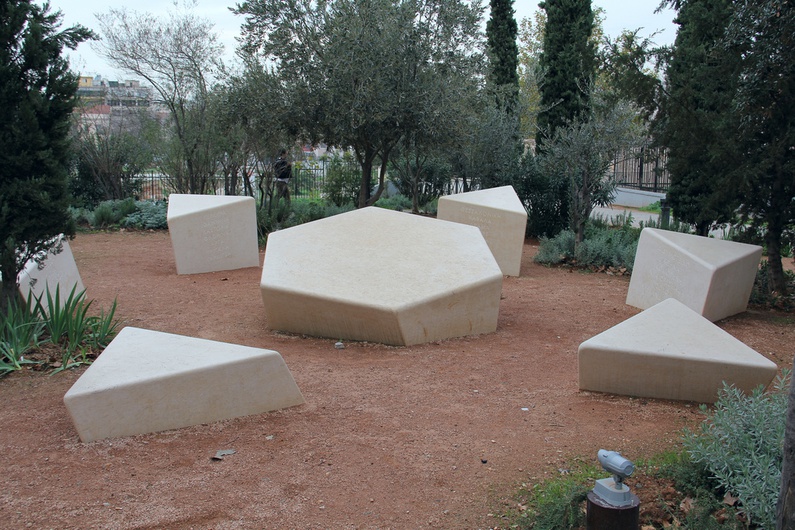 The Jewish Museum of Greece, not far from Syntagma Square, estimates there were 78,000 Greek Jews at the start of World War II. In the largest community in Thessaloniki, 97% died. Those who came home found little of their former lives. Dimi’s grandmother was one of five Jews to return to the island of Kos. One cousin survived by swimming off the island – later arriving in Cyprus.

The museum is designed around a six-sided stairwell, situating the Holocaust at its mid-point. The receptionist explains that this is intentional, to highlight the depth and variety of Jewish culture before and after Nazi occupation.

Athens became the hub for Greece’s Jews, who relocated after the war to try to rebuild their lives. However, Dimi says, people often don’t know this: "To some people, Jewish Greeks do not exist, except perhaps in Thessaloniki." Some young Greeks I spoke to were surprised to hear that Athens had a synagogue – even Google Maps couldn’t find it.

The community is subject to strict security measures – a necessary step due to the risk of antisemitism. Not long ago, the memorial was vandalised with a slogan promoting Golden Dawn, the extreme far-right party known for its racist, xenophobic views.

"We want to bring this tradition into the modern era"

In Greece – by some estimations 98% Greek Orthodox Christian – the Jewish community has to struggle to remind people they even exist. "There’s a big problem of identity," Dimi explains, "It’s a huge crisis for the synagogue."

To help mitigate the problem, Athens called on the Chabad – an international organisation set up to help synagogues across the world organise outreach programs and to connect them to international communities.

Dimi’s tour ends at the city’s first kosher restaurant, home of the Chabad’s offices since 2011 – a step up from the small apartment they had when they first arrived. Dimi is impressed by the space, which also houses a kosher grocers – a vast improvement from when he lived in the city.

In parts of Athens, where yellow cabs block up grid-like streets, you might just about think you were in New York. When Rabbi Mendel Hendel arrived in Athens from the Big Apple 15 years ago, he was faced with a difficult task. Unlike the Jewish enclaves in Brooklyn or Queens, the Athens community is spread out: 2,500 people in a city of five million.

He rose to the challenge. "When you inspire someone," he explains, "that inspiration goes on and on. That’s so important in a small community; to remember the value of each person." 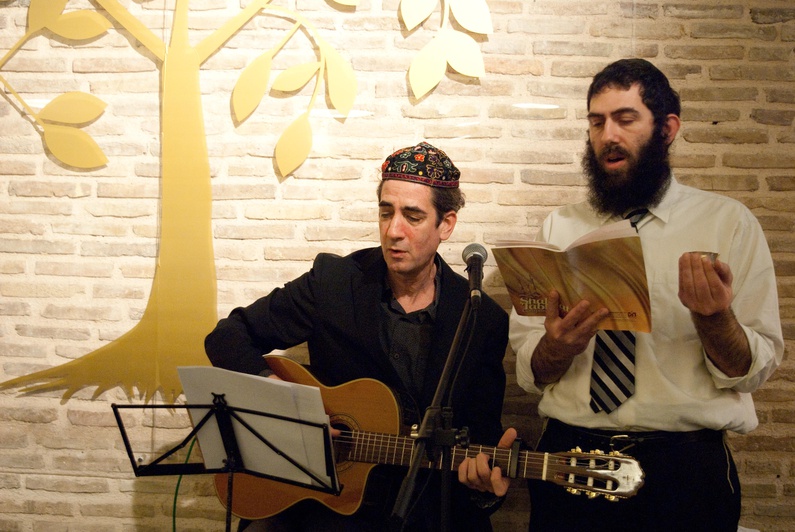 Keeping people, especially young people, involved with religious traditions has recently got tougher. "The last four years have been very challenging," Hendel admits. Young people in Greece, seeing no prospects, began looking abroad. This youth exodus isn’t unique to the Jewish community, but it compounds the difficulties of keeping a younger generation involved in Jewish life.

"We want to bring the tradition into the modern era, and make it relevant to them," he explains. Modernity is evident in his methods; Hendel leads a weekly Skype workshop, joined by young people across the city, even further afield. One expat regularly joins the lessons from Israel.

The arrival of a new rabbi in 2015 helped boost youth outreach. Rabbi Gabriel Negrin, himself a Greek, is just 26 years old. I’m invited to meet him at the restaurant’s Shabbat meal on Friday evening, though Hendel reminds me that, on the day of rest, practising Jews abstain from any form of creative work – including note-taking or recordings. A difficult prospect for a reporter in the field.

I’m early to the restaurant the following evening, yet there’s already a group of men enthusiastically singing in Hebrew. A few women and children sit chatting on sofas. Despite the tables being laden with food, the restaurant is still half empty. Aware I am the only man in the room whose head isn’t covered, I wait for Hendel to arrive.

Soon enough, he appears leading a congregation from the synagogue. He’s dressed for the occasion in a wide brimmed hat and smart black suit. A young boy runs ahead of him, eager to join the celebrations. Hendel greets me warmly and fetches me a kippah, before gesturing me to sit. As the room fills up, I note young people seem thin on the ground.

At dinner, as in life, Jewish and Greek identities intermingle freely. Kosher stews and challah bread are served alongside Greek salads, aubergine dip and an ouzo aperitif. The Chabad regularly welcomes guests from all over the world for Shabbat, alongside its Greek regulars. Still, it’s a more sedate affair than some. "I’ve been to Shabbats in Bangkok with 500 people," says the man sitting opposite, "In Israel there can be 2000."

A well-dressed man in a grey suit and red tie takes his place across from me. Mendel makes his introductions, and I realise he’s the young Rabbi I’ve heard so much about. Conversation covers his studies in Israel, the decreasing appeal of religion to young people, and the problems visiting tourists have keeping Shabbat in Greece. All the while, he effortlessly switches between English, Greek and Hebrew.

The singing gets louder with each passing course. "It isn’t usually like this," Hendel laughs. There’s a group visiting from Israel, apparently including a young Israeli pop star.

"He’s not really religious," Negrin explains, "They weren’t even in synagogue. But yet here he is, wearing the kippah, and he knows all the words to the Hebrew songs. If a Greek singer did that he would be bankrupt overnight." The rabbi also contributes his fair share of singing; before his rabbinical training he studied music in Crete.

His Greek identity shows in his preference for songs, more European than his Israeli visitors. "I’ve a meeting with Morpheus," he tells me at the end of the meal, invoking the Greek god of sleep even as he wishes me "Shabbat shalom".

"No one is coming just to light up the lights"

The next morning, Negrin presides over services at the synagogue. I’ve been invited by Monis, the former head of a Jewish youth club the rabbi himself attended over fifteen years ago – it ended in 2002, due to a lack of demand. Nowadays he works in the retirement home.

Security checks my ID before Monis leads me in through the front door. Women enter via a side door to sit on a segregated balcony. Monis greets nearly everyone he passes. Apart from the rabbi and the community’s Hazan presiding over the ceremony, I’m by far the youngest person in the room. 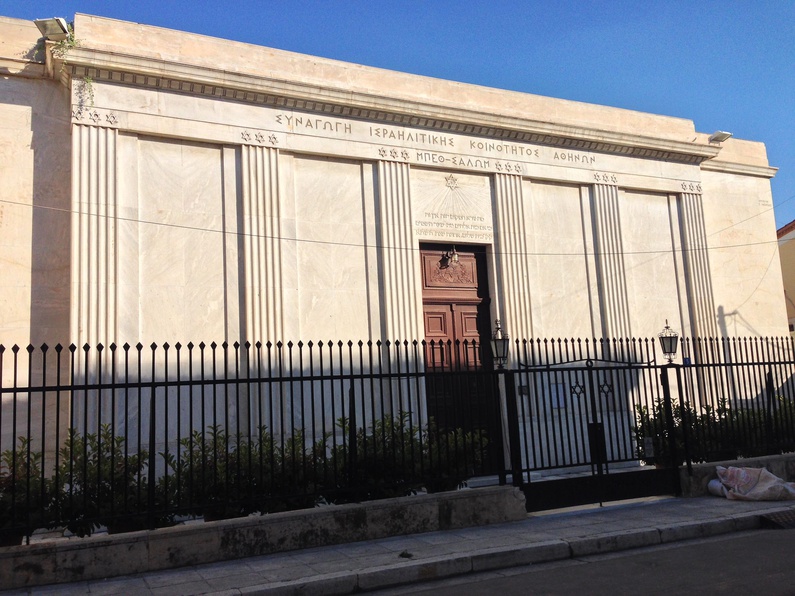 "Young people are worried about their very existence," Monis tells me after the service, "Not everyone believes that the solidarity of the community relies on the synagogue."

Personally, he finds the synagogue a necessary component. "The history of the Jewish people is their religion, and the religion is their history," he says, "My father had a number written on his arm. It’s my obligation to want my history to go on. The only thing is to gather together."

And yet gathering together is one thing young Greek Jews do well, even if it’s not at synagogue. The Jewish Community of Athens Youth Association has an active social calendar, running events and workshops throughout the year. Sarina Mizan, 24, is a member of the board.

"We try to focus on tradition in a lighter way," she explains. During the festival of Hannukah, the youth association attends services at the synagogue, but follows it up with a barbecue. This social aspect is what keeps young people involved. As Sarina puts it: "No one is coming just to light up the lights."

But questions of identity are increasingly hard to avoid, given the rise of far-right movements across the continent. Sarina feels that without knowledge of history and politics it’s difficult to participate in the conversation – "to protect yourself," as she puts it.

Many peers have gone abroad, to Israel – but also cities such as London, Dublin and Paris. Despite this, they remain involved. During a recent Taglit (a birthright trip to Israel promoted by the Israeli government), the association won the right to allow expats to join them. "We couldn’t leave them behind," Sarina explains.

Given this dispersal, she thinks it’s important to forge stronger relationships with Jewish communities across Europe. "They’ve faced the same problems in the past," she argues, "They can show us a direction." Even if there’s more than one way forward, for Sarina "the important thing is that we are friends."