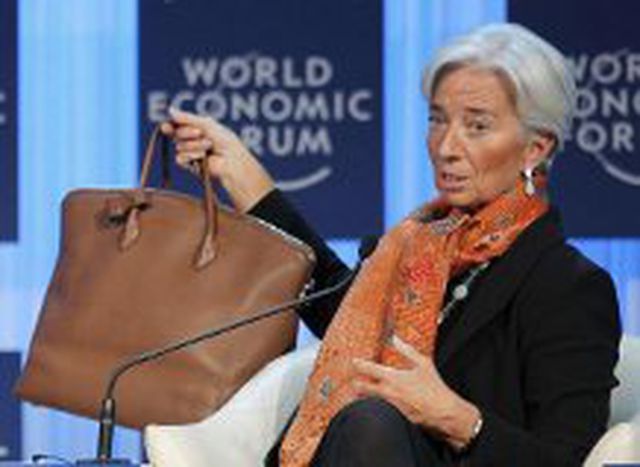 It's a quote from Christine Lagarde, the elegant head of the International Monetary Fund (IMF) who, during the last World Economic Forum in Davos (Switzerland), called for a fund-raising exercise (with Japan, China and the US in mind) to increase the IMF’s resources and to restore the global financial system. It is true that a ‘Lock-it’ Louis Vuitton bag is not the kind that a woman usually calls ‘a little bag’ for her daily routine carrying activity, but it is certainly too little to collect the money to save the Eurozone from its sovereign debt crisis.

A ‘fashionist’ wand in times of austerity: is it the last attempt to save the Euro?

'There are not going to be further contributions to the International Monetary Fund from other G20 countries, including Britain, unless we see the ‘colour of their money’, said George Osborne, the UK's chancellor of the exchequer at the forum.

The Eurozone needs to show political will and a significant increase in available resources to the so-called firewall - the European Financial Stability Facility (EFSF) and the European Stability Mechanism (ESM) - or it is unlikely that developed countries will agree to contribute more money to the IMF.

But the economic slowdown is not just a Eurozone crisis. It is a crisis that threatens to contaminate other countries and to spill around the world, stressed Mrs Lagarde. No country is immune. No vaccine has been found yet. And the need for action and solidarity is becoming even more urgent if the forecast outlined by the New York University Professor of Economics Rubini is anything to go by.

‘There is a 50% chance that the Eurozone will break up in the next three to five years. This doesn’t look like a G20 world, it looks like a G-Zero world because there is no agreement on global imbalances, how to change the international monetary system, international trade, banking regulation, on all the fundamental issues.’

‘In the UK there is recession, even the US is not doing great, in India there’s a slowdown and they’re worried about that. In China, exports, infrastructure investment, real estate is slowing down, so there’ll be a significant slowdown in China this year’, he concluded during the final sessions of the World Economic Forum.

2012’s kick off is not really doing well. Does Europe’s horoscope predict better for the rest of the year?

Christine Lagarde believes that by increasing contributions to the IMF, the world will be making a ‘statement of confidence for the multilateral process.’ When there is enough money, it will not be used. A statement that, if delivered to fashion-victims, might not be entirely true. More money, more clothes and especially more bags and shoes. But if delivered to the financial crowd will have the effect of reassuring the markets that the IMF will have to help distressed economies to put their accounts in order.

The wand now is in the hands of the charming Danish Prime Minister, Mrs Helle Thorning-Schmidt, to advance negotiations during this informal European Council. ‘The Devils are wearing Prada’.