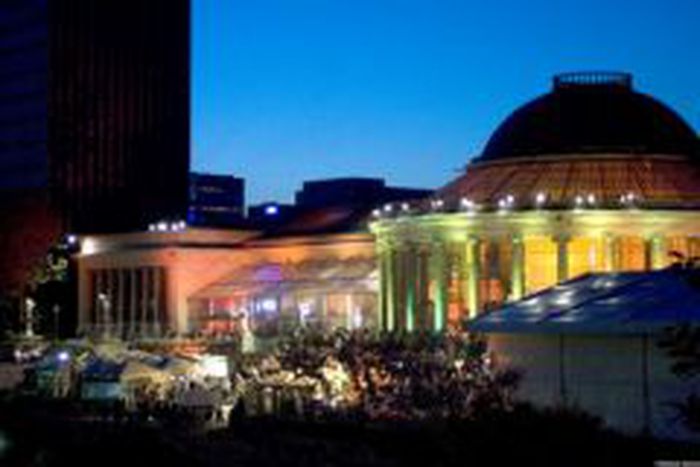 After past successes of 'Les Nuits Botaniques', the Cultural Centre of the French Community and the External Affairs Office of the Ministry of the Brussels-Capital Region, are ready to go at it again. The festival took place from the 7th of May until the 17th of May in Koningsstraat, Brussels.

Together with two friends, I put on my dancing shoes and we went downtown. Numerous music fans were already present, waiting at the large steps in front of the Botanical Garden's greenhouses, a beer in hand or enjoying the extensive choice of food offered - varying from Chinese noodles to ordinary Belgian fries. Meanwhile, in the Witloof Bar, the bar inside of the greenhouses, a warm atmosphere was created with contemporary records. Gradually, masses of people arrived. The clock struck nine. In the tent outside, you could hear Jamie Lidell's guitar reverberating. Fans became hysterical. Thanks to the location of the performance, people outside of the tent were able to enjoy his soul music as well. It was difficult not to start dancing. But it wasn't until the end, you could tell just how succesful his show had actually been. As people left the tent, they were still extremely excited. Perhaps even more so than before. Some fans even cheered that enthusiastically, they made Jamie pick up his microphone again and sing us one last song.

But the party wasn't only happening in the tent. In the Greenhouses, more specifically in the 'Cirque Royale', in the 'Organgerie' and in the 'Rotonde', other bands were performing. Bands such as the pop-rock band Vismets, who had already performed in the Botanical gardens before. Or the popular American band The Drums and the eccentric French band Sexy Sushi. The cheering of the fans, the feeling of the beat echoing inside your chest and the mix of famous and less famous artists, show yet another triumph of 'Les Nuits Botanique'.

I know I'll be there again next year!