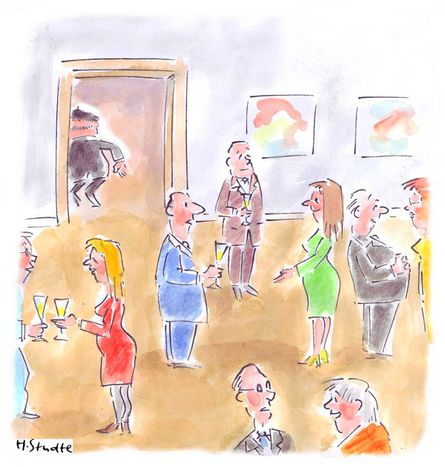 Belgians eat chips, Spaniards feast and Italians flirt… European stereotypes are ever present in our everyday expressions. Idioms of the week

When someone leaves without warning, perhaps a bit slyly, the Germans say sich auf Französisch empfehlen

(to recommend yourself in a French way, literally), which translates in English to take french leave

and in Spanish  despedirse a la francesa

. To scram à la française, is an expression referring back to the eighteenth century when it was customary, in France, to leave a party without saying goodbye to the host. In French, perhaps as linguistic revenge, the phrase is filer à l’anglaise

(to leave in an English way), which is the same for the Italians (filarsela all'inglese

), and the Poles (wyjśc po angielsku).

The English are the subjects in Germany, where the expression Englisch einkaufen

(to shop English), is commonplace, meaning to serve oneself without paying; an expression that has been used since the colonial era, in the eighteenth and nineteenth centuries. But the Germans have clearly established themselves a reputation in France where from the seventeenth century, one has spoken of querelle d’Allemands

when describing a dispute that has not serious reason of being.

In English, the expression Spanish practices

has become associated with malpractice in the workplace, and while politically incorrect for many, the expression refers back to the punitive treatment dished out by the Spanish inquisition.

If the French have more of a reputation of being less distinguished, the English pay reference to them when they excuse themselves for their bad language, saying Excuse my french !

This act dates back to the eleventh century and the Norman conquests where for those French invaders, the Anglo-Saxon language was considered vulgar, peasant-like.

Somewhat ironically, excusez mon français was in fact a way of excusing oneself after having said an Anglo-Saxon word instead of one belonging to the elegant French language. Others believe that the expression was developed in the nineteenth century when the French were thought of as sex and pornography-obsessed. Perceptions which are still evoked today when one can  aller se faire voir chez les Grecs

(go and be seen by the Greeks), a delicate French expression relating back to the homosexual reputation of the Greeks…