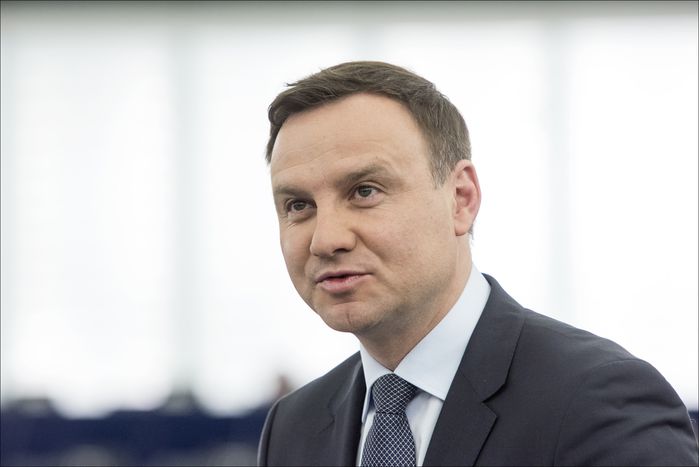 Andrzej Duda of the national conservative PiS was sworn in as Poland's new president in the Sejm on Thursday. Some commentators fear a shift to the right while others believe Duda will surprise his detractors with a strong presidency.

Duda should not be Kaczyński's puppet - The Economist, United Kingdom

Poland's new president and his Law and Justice Party (PiS) must take a responsible approach to the power they wield, the conservative weekly The Economist urges: "Will it retain the sensible centrism he campaigned on? Or will it fall back into the oddball prickliness of Jaroslaw Kaczynski, the party mastermind?... Which course Poland takes will depend much on Mr Duda, who, as president, shares responsibility for foreign policy with the government. Born in 1972, he marks a shift in Polish politics from a generation whose outlook was forged under communism. Poles' desire for political change is understandable, but their democracy needs two responsible parties, not just one. Mr Duda must prove he is not Mr Kaczynski's puppet. (06/08/2015)

New president can only be a pleasant surprise - Mladá fronta Dnes, Czech Republic

The new Polish President Andrzej Duda can play a similar role to that of his Slovakian counterpart Andrej Kiska, the liberal Mladá fronta Dnes believes: "Many people in Slovakia warned against the unknown billionaire Kiska. But to date he has performed his role with the elegance of a professional diplomat. … In Duda's case two things are decisive. Will the success of his Law and Justice Party [PiS] be confirmed in the parliamentary elections in autumn? Secondly, is Duda really a free swimmer, will he seem as independent in office as he seemed in the election campaign? Or will he merely fulfil the wishes and desires of the party leader Kaczyński, as he has done throughout his career? … Although Duda would hardly have become president without Kaczyński, the signs are changing. Now the former prime minister and current opposition leader Kaczyński needs the president's support. Poland traditionally has strong presidents. The new boy at the top can only come as a pleasant surprise." (07/08/2015)

Do not return to megalomania and intolerance - Gazeta Wyborcza, Poland

In a commentary piece for the liberal daily Gazeta Wyborcza Poland's new president Andrzej Duda hinted at the possibility of changing the constitution to strengthen Poland's sovereignty. The newspaper considers this a dangerous venture: "What changes could possibly lead to better protection of our independence and cultural identity? We know how Vladimir Putin protects the sovereignty of the Russian Federation and how Viktor Orbán protects the Hungarian state. We have every reason to regard this statement as questionable because it suggests that Poland is seeking anti-democratic solutions or that nationalist megalomania and intolerance are making a comeback. … We want Duda to make the language of dialogue the centrepiece of his presidency, not aggression and intolerance." (07/08/2015)

In his statement to MPs in the Sejm Andrzej Duda called for stronger Nato presence in his country as well as "more guarantees" against the Russian threat. His demands are justified, writes the conservative daily Frankfurter Allgemeine Zeitung: "Nato would do well not only to take these concerns seriously but to introduce a sensible amount of practical measures to stop Moscow doing anything stupid, either politically or militarily. Duda's demand for increased Nato presence in Eastern Europe also shows Russian policies are summoning the very spirits the Kremlin claims to want to banish. If Nato followed Moscow's line of argument, as some in the West still do, Duda wouldn't need to make any demands. Central and Eastern Europe would already have Nato military structures in place. But they don't, and the desire to set them up isn't very strong in the West. But what has to be done will be done - thanks to Putin." (07/08/2015)