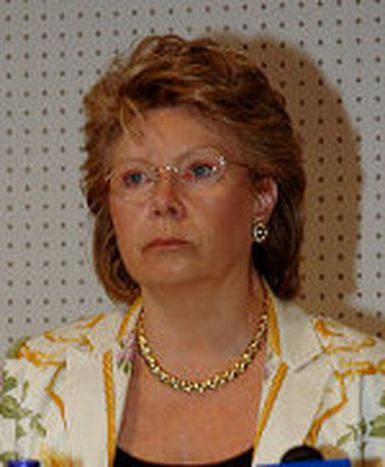 Europeana Library - « We got the message » says Mrs Redding

By Veronique Le Guen Translated by Julien de Cruz On 20 November, the online European library Europeana was launched with much PR fuss. Google book search was predicted to lose its leadership position for online access to digitalised book. The "made in Europe" library though was so successful that it had to shut down access on the very evening of its launch.

On Monday December 8, Viviane Reding, the commissioner for information society and media, gave the reasons of this flop at a meeting organized by the Joint Committee of the European Parliament and national Parliaments of the EU. Verbatim.

" When I launched the idea of a European online library, people wondered: Why start another library project when Google has already taken the lead ? Why not integrate simply our European library to the American project? Well, our library is very different from Google's. Google book search is a only a search engine that delivers results at random. Our library leads net surfers to a structured house built by 1,000 European cultural centres: libraries, archive centres and museums.

For instance, someone interested by Chopin will be able to listen to the composer's early recordings, consult his personal sheet music, learn about where he travelled around Europe, read his love letters, see which artists influenced him and which ones he influenced himself… All of this will have been analysed by our cultural experts.

To begin with, we have put 3 millions of works online. In an hour, 20 million people wanted to access them. The site collapsed because experts had only planned a maximum of 2 to 3 millions visitors per hour. We had designed the page for 5 millions of them, thinking we had seen things big. We got the message. Citizens need to access our material because it is often hidden. The library will be accessible very soon. In 2009, the Codex Sinaiticus, a Bible (the oldest in the world written in greek between the 1st and 4th century A.C. ed.) which 350 pages are situated in different locations in London, St-Petersburg, Germany and Egypt, will be put online entirely on Europeana. In 2010, more than 10 millions of works will be available. However, this will only represent 1% of our cultural treasures. It is thus up to you Member States to digitalise those works as they belong to all of us. "