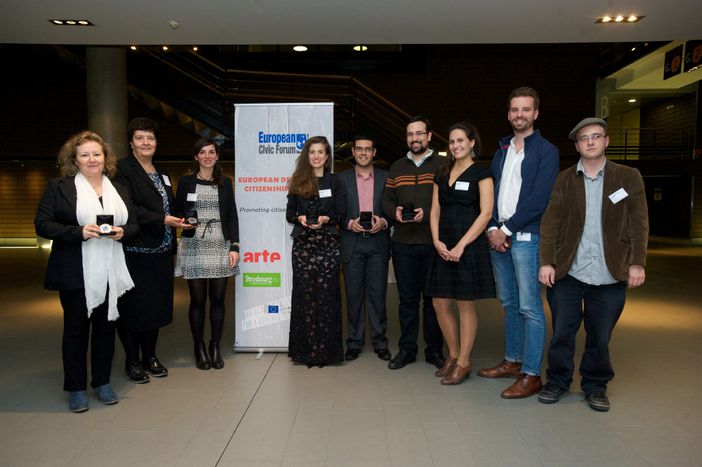 Annually, the European Civic Forum recognizes outstanding individuals, NGOs, campaigners and citizen’s media with the European Democratic Citizenship Award. The ECF is a network of European NGOs and associations which aims to strengthen democracy, equality and solidarity in Europe. This year, the award ceremony took place on 22nd October 2015, during the ECF’s conference ‘European Civic Days’.

The end of the first conference day of the European Civic Days had a special highlight on its agenda: the ceremony for the European Democratic Citizenship Awards of 2015. The Awards were divided in four categories and honored the personality, media initiative, NGO and campaign of the year. Alexandrina Najmowicz from the ECF explained: "We try to give visibility and celebrate civic engagement." They aimed to reward the creativity of the different actors and their ways to enact and reinvent citizenship. 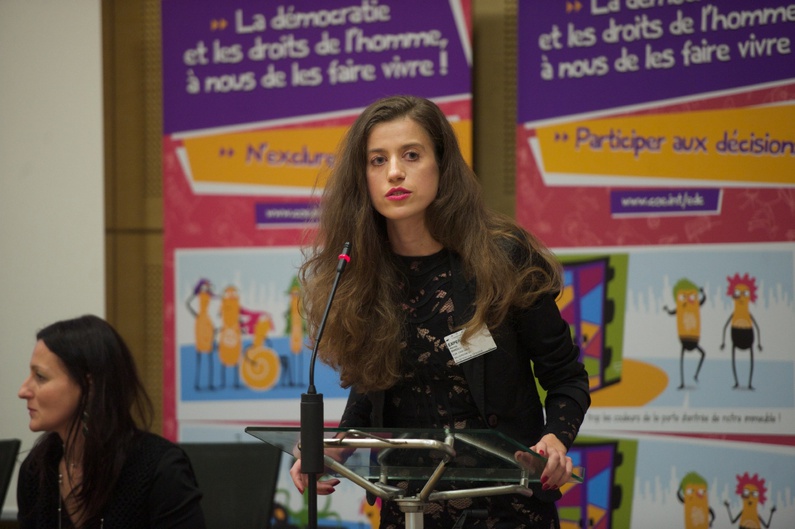 The first laureate got a special introduction. Antje Rothemund from the Council of Europe compliments the laureate in the best way. It’s about her inspiring attitude and her impressive work on youth empowerment and youth engagement, particularly for the association ‘Beyond Barriers’. She definitely had the audience’s attention from the first moment on. And there she was, Marsida Bandilli, the Personality of the year. An impressive title. The young woman accepted gratefully the award. The moment she started her very modest speech, it became clear that the compliments were rightly given. The award meant great honor but also responsibility for Marsida. This award was not about her, she explained, but all the young people who try to do something for the society. “Every person can build bridges”, she said. However, this award had a symbolic value that recognized her work and encourages young people. She was convinced it will push her forward in the future. 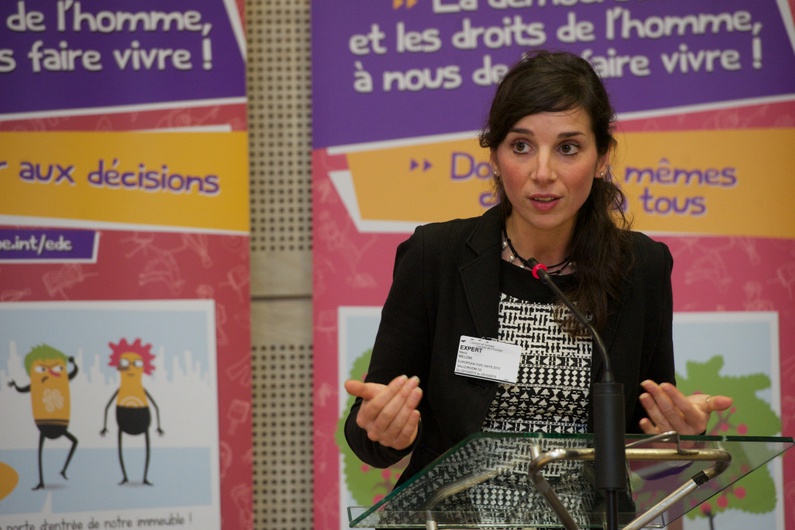 Giving hope to the people is an important part of the work for the two women who entered the stage after her: Marta Meloni and Iliyana Nikolova. They were the laureates for the Media Initiative of the Year, representing ‘Comics for Equality’. The project started three years ago, this is the second award they receive. Comics work as a powerful tool to build solidarity and a common Europe, they explain. Besides, it appeals to young people. The comics are drawn by migrants from five different countries, telling the stories they experienced. Marta emphasized that it is important to see the challenges that they were confronted with. “We must talk about racism!” she adds. Why is a media initiative so important? To reach the European citizens, however not with a ‘normal’ site. “We need to create a European public space”, they explained. “They are interested, want to understand what is going on in Brussels. Next to the politicians, there are many young people that want to change something!”

The award for the NGO of the Year honors an organization that concentrates again on young people: ‘Youthnet Hellas’. Their focus is to build together on a (new) society. The organization tries to provide young people with high quality services and work as a platform to inform them. Many young people are affected by the current crisis and youth unemployment. A Greek laureate might not be a coincidence. Dimitris Makrystathis was here to accept the award full of pride an honour. It showed that Greek is by no means a “European failure”. This NGO proved that it’s possible to make a difference in Europe. 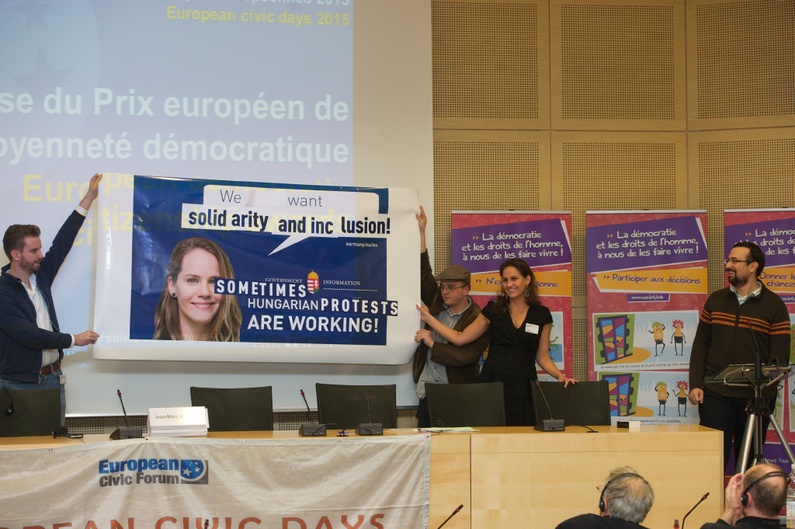 Afterwards, four people walked across the stage, carrying a large, rolled up piece of paper. They were the recipients of the award for the Campaign of the Year for their initiative ‘100 thousand against the internet tax’. Balázs Gulyás, their speaker, began the protest on the 26th of October 2014 in response to an announcement that Hungarian government was planning to introduce an internet tax. This led to the largest protests in recent years which subsequently prevented the law from being enacted. This group wanted to demonstrate how change is possible and that the civil society can have a strong and loud voice. They unrolled the paper they brought with them and presented their revised version of an anti-migration poster which now featured a new message: “We want solidarity and inclusion! Sometimes Hungarian protests are working!” Rewarding a Hungarian initiative has something symbolic. “Hungary, that’s not the same as the Orbán regime!” they said.

But what happens when the laureates return home? João Labrincha, from the ‘Citizenship Academy’ is one of the laureates from the previous year. Along with other from the group, he received the award for their activism in the ‘12 March Movement’ in Portugal which would influence the Spanish demonstrations in May 2011. “There was a song at that time, Parva Que Sou...”, he said. He paused to roll up his sleeves and reveal his arm while saying, “Look, I still get goosebumps!” This song deals with circumstances that both Labrincha and his generations can identify with, the precarious situation many young people face in Southern Europe since the crisis. Around February 2011, they started their work on the campaign. In his opinion, the people were beginning to wake up. Receiving the award in 2014 gave extra vitality to their movement, bringing more visibility and credibility.

Yet, it remains to be seen how the future for the laureates of 2015 will look like. It can only be hoped for that they keep their passion and take the award as an encouragement, for themselves and for others to fight for democracy, equality and solidarity in Europe.