The heads of government of the 28 member states are meeting on the 20th and 21st of October in Brussels. But what happened and what was said during their first marathon day? A cocktail of Russian evil, Brexit and a certain Paul Magnette.

This European Council is rather special. It's the first time that Theresa May, Prime Minister of the United Kingdom since the 16th July, has participated in one of its meetings. Brexit, however, is taking up just a tiny portion of the agenda. On the main menu are three issues which are making headlines across Europe and commanding the attention of politicians and the public alike: migration, trade agreements and relations between the EU and Russia. The leaders will also touch on other issues like the situation in the Netherlands regarding the deal with Ukraine.

Even if only one sentence of twelve words in the Council's draft conclusions was devoted to the EU-Russia situation, the topic has featured in the first statements from European leaders. As for the press, we already knew that the Russian leader was going to attract attention.

"We have put pressure on Vladimir Putin to do his duty, that is, to stop the bombings rather than continuing to act in support of the Syrian regime", declared François Hollande at the entrance to the Council building.

For her part, Theresa May also strongly criticised the attacks carried out by the Russian armed forces. "It is of vital importance that we continue to work together to convince Russia to immediately stop its appalling and sickening atrocities in Syria."

You might think, then, that the European Union is indeed considering additional sanctions against Russia. As the French president confirmed upon his arrival in Brussels, "all options are open for as long as there is the intention to destroy Aleppo". However, Martin Schulz - president of the European Parliament - said a little more on the subject at his press conference. "I am afraid that there will be no new sanctions against Russia, just as there will be no opportunity to lift the current sanctions". Everyone criticises the cruelty of the Russians, but the EU doesn't sanction them. Life is strange. The political reality is that the EU cannot do anything if it cannot count on the unanimity of its member states. But the majority of the heads of state are reluctant to introduce sanctions like those adopted in 2014, at the time of the crisis in Crimea.

The Merry Month(s) of May 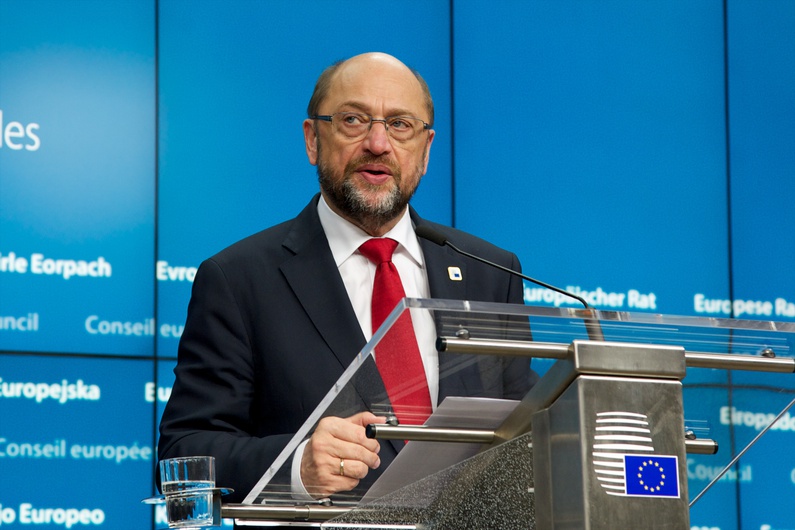 In June, David Cameron said his goodbyes following the result of 'his' referendum on the UK remaining in the EU. Yesterday, it was all about welcoming his successor. And Donald Tusk was ready to welcome Theresa May, as is proper. The president of the European Council wanted to reassure the British leader with regard to the media. "Some media described her first summit as entering the lion's den. It's not true. It's more like a nest of doves." Beautiful, Mr. Tusk.

But the Conservative leader didn't seem to need any help. Upon her arrival at the Council, she seemed well aware of the reasons why she was in Brussels. Firstly, to deliver a very clear message: "The United Kingdom is leaving the European Union, but we will be a strong and dependable partner. It is in the interests of both the UK and the EU that we continue to work together."

May, who did not get a great deal of time to discuss Brexit, is not seeking a divorce, but rather a separation. In return, the prime minister of Luxembourg, Xavier Bettel (who's less of a poet than Tusk), declared, "either we're married, or we're not".

Hollande, for his part, is warning that the negotiations will not be at all soft, and addressed the British prime minister directly. "I say very firmly; if Theresa May wants a hard Brexit, the negotiations will be hard". On the same subject, Martin Schulz declared at the end of the first day that he "refuses to imagine a Europe where lorries can cross borders freely, but not citizens".

In the afternoon, Tusk showed his concern about the credibility of the Union. He wrote on Twitter, "Deeply concerned by the difficult situation with CETA. I am still waiting for an answer. The credibility of Europe is at stake". It's true that the situation is far from easy, since the government of the Belgian region of Wallonia has once again given its 'no' verdict to CETA. Yesterday evening, at around 9 p.m., all eyes were on the Walloon capital, where Paul Magnette (minister-president of Wallonia, ed.) had called an extraordinary meeting. He believes that Canada is more open than the EU and wishes, therefore, to negotiate directly with the Canadian prime minister, Justin Trudeau. As for Friday's deadline, Magnette has been very clear; "To those who seek to put time pressure on us, it won't work".

It would have been good to hear what the Belgian prime minister had to say on this subject, but he cancelled his briefing at the last minute. The light at the end of the tunnel that Charles Michel was hoping for isn't here yet.

Finally, one of the main subjects at this European Council was migration. A conclusion was reached at 10.30 p.m. The member states will continue their efforts regarding the migrant crisis. According to Schulz, "the problem is that only certain countries are shouldering their responsibilities to act and help migrants". Tusk himself also confirmed that there will be "no pick-and-choose solidarity, because they will concentrate instead on a more effective solidarity".

Whatever it is, the European Council is not finished - one day still remains. And, as Renzi said just before heading to bed: "We need actions, not just words".