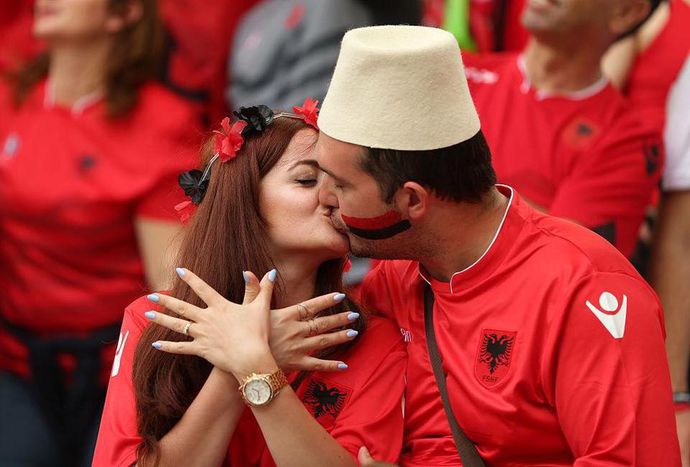 The 2016 UEFA European Football Championships are underway in France. With the competition extended to 24 teams, Euro 2016 promises a longer tournament, with several sides making their grand debut. Cafébabel gives you a run down of a few of the national sides, covering the general mood, some quick predictions and even current fashion trends. This time, we let the Eagles fly.

Albania has qualified for a major tournament for the first time in their footballing history. During decades of isolation under a communist regime Albanian football produced some quality players, but never reached the World Cup or Euros. However, following Italian coach Gianni De Biasi's worldwide scout for Albanian football talent, the dream came true after finishing as runner-up to Portugal in their qualifying group stage. De Biasi's rebuilding of the Albanian team focused on their weak defence. Formerly ranked in the nineties in world rankings, they have evolved to beat both Portugal and France and nab two draws with Denmark. The now infamous drone incident sealed a 3-0 win by default against Serbia. Albania has fought – sometimes literally – for every point during qualification, and with no intent on stopping now. The Euro means so much to the country, that De Biasi has even been given honorary Albanian citizenship.

The bookies aren't giving Albanian the best odds, but a video shared online by Eric Cantona made it’s point, Greece in 2004 and Denmark in 1992 had no chance of winning either. Albania could be the team to continue the Leicester legacy. Football isn't about statistics but heart and commitment. One thing is sure, they're not afraid of losing!

As reported in the media, the group is very isolated with a huge security force around them – but this was also part of the coach's plan. The public can see them for half an hour a day during training sessions. They're staying in Perros-Guirec, a small town in the north-west of France, at the Agapa Hotel, highly secured for Euro 2016 and very hard to get into to talk to the players, according to reporters. Most of their time will be spent on social media – only Captain Cana had time to visit his family during the France game (he got a red card in the match against Switzerland).

Thanks to his unfortunately suspension, the undisputed captain of the Eagles, Lorik Cana, was unfortunately unable to play in his old beloved Marseille stadium where he spent the best years of his career. Instead the team relied on two other stars. Taulant Xhaka is a rock in midfield and is known for his strong character.  He had to face off against his younger brother Granit, who plays for Switzerland, in what must have been a difficult match. The one to watch out for? Elseid Hysaj. The 22-year-old Napoli right back is the most expensive and most talented youngster in the team.

The heads of the pack

The national team were styled by an Albanian fashion designer Altin Mici. Here they are looking sharp with the Albanian Prime Minister Edi Rama. 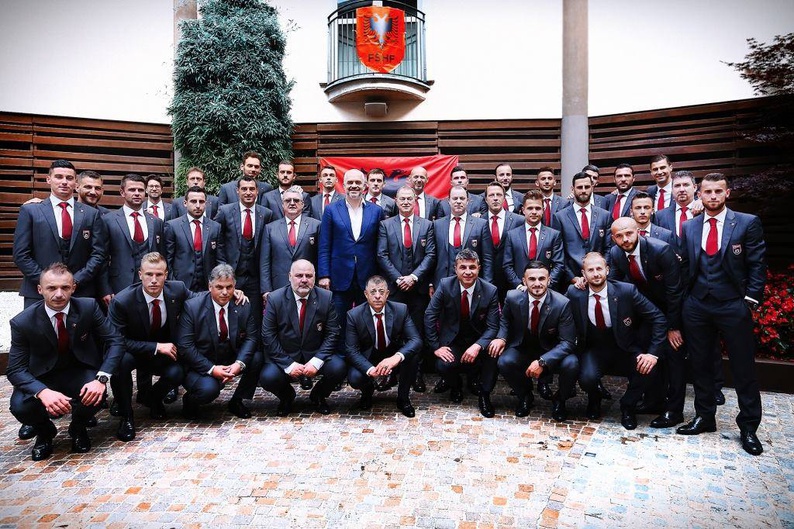 The Albanian National team is relatively inexperienced with major tournaments so fans were afraid that they wouldn't be able to fight hard enough to keep their heads in the game. Even though they lost in Lens, the boys played a great game (especially the second half) and supporters were proud that they were able to maintain aggressive play. After losing to France, they need a 2-0 victory against Romania to advance, and the fans still believe in their heroes. 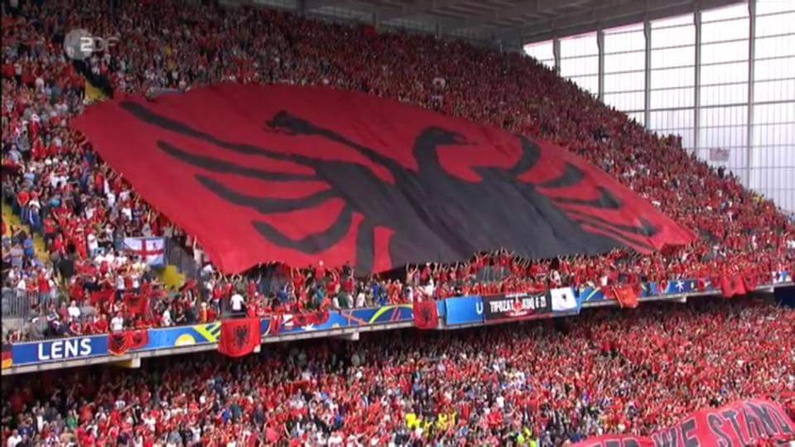 What you’ll hear about Albania

Albanian fans living both inside and outside Albania have gathered in France to watch their national team play, wave their flags, and dress in red and black to support the boys on the pitch. The biggest Albanian fan community a.k.a Tifozat Kuq e Zi (the Red and Black Fans) were the orchestrators of the huge Albanian flag displayed in the stands in Lens as well as Marseille, which claimed a Guinness World Record. Beyond that, the fans do their fair share of singing. Here's Kuq e Zi (Red and Black) by Elvana Gjata.