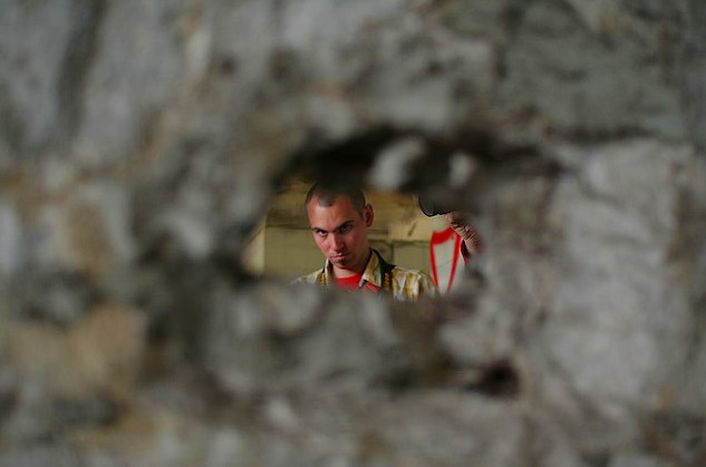 With its roof looking like a waving Polish flag, the national stadium became the newest addition to the Polish capital's fantastic skyline on 29 January. It opened seven months later than planned on the historic banks of the Vistula river but still in time for the 2012 European football championships this summer

The pounding of construction equipment carries over the dusty site. A statue of three muscular athletes sticks out like a sore thumb between the earth-movers and cement mixers in front of the red and white south face of the stadium oval, where our tour begins. Their westward-turned faces show determined edges. 'They are nicknamed the 'barefoot runners escaping the east',' says Jarek Dąbrowski, who has been a city guide since he was 23 and a resident of Warsaw for 72 years. Up until construction started on the national stadium in 2008, which was completed by January 2012, the statue had decorated the southern entrance of the 10th-anniversary stadium ('Stadion Dziesięciolecia' in Polish), which was built shortly after the second world war on the ruins of devastated Warsaw. 'It was the headstone on the graveyard that was the city,' explains Dąbrowski. Its construction was occasioned by a socialist propaganda event: the fifth world festival of youth and students.

The 'Stadion X-lecia' - an abbreviation of the laborious official name of the stadium - was paradoxically famous for acts of protest against the regime. At a 1968 harvest festival, philosophy teacher Ryszard Siwiec protested against the bloody suppression of the Prague spring by Warsaw pact troops with a public self-immolation. The incident was covered up, with not a word about it in the newspapers. It wasn't until after the reunification of Germany that filmmaker Maciej Drygas created a belated memorial to the martyr with the documentary Hear My Cry.

The 10th-anniversary stadium was also the setting for another legendary anti-regime event. 'When pope John Paul II held mass in the stadium in 1983, he was treated like a pop star,' says Dąbrowski, who was one of the 1.5 million spectators present at the event. 'Flags printed with the lettering of the solidarnosc trade union had been smuggled in, and whenever they appeared, a cheer rose up. The stands were a sea of red and white flags.' The pope gave his blessing to the then-forbidden union. He supported their fight for democracy and independence, which they would win six years later. 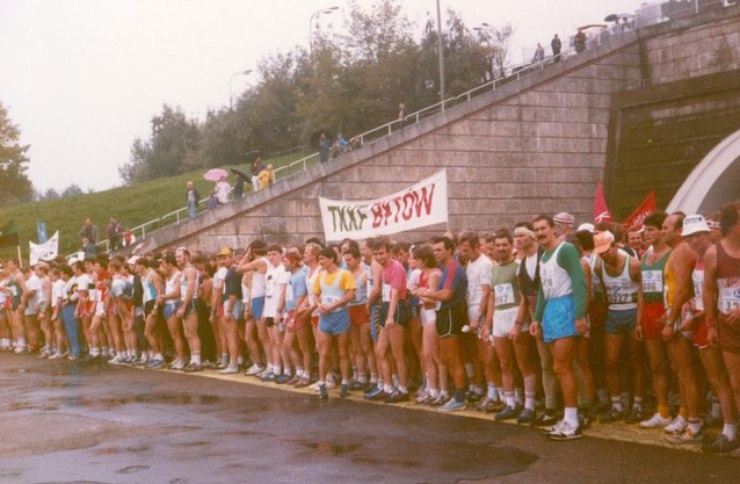 The structure, which in the 1980s had sprung up on the banks of the Vistula river in less than 11 months, began to crumble - as did the political system. Furthermore, the building had various practical defects; half-time during football games had to be doubled due to the distance between the locker rooms and the playing field. There was also no artificial lighting. 'Cars would be parked around the track with their headlights running,' remembers Dąbrowski. 'You could have raised a hill out of the debris from the old building!' The proposal was made on the front page of the local paper Super-Ekspres, but the city rejected it. A group of architects who wanted to place the stadium under protection as a monument because of its history and architecture was equally unsuccessful. When Poland and Ukraine were named as hosts for the 2012 european football championships, it was decided that a new stadium must be built on the foundation of the ruins. The architects are JSK Architekci.

The building itself wasn't the only thing that lost out in this decision. In the beginning of the 1990s, an open-air market had been opened in the area around the outside of the ruins and on the crown of the stadium. Vendors came from Poland, its eastern border countries and Vietnam. While it was initially known by the promisingly progressive name European fair, it quickly became known as the Russian market. Anything that could possibly be sold was for sale there. 'Weapons, dogs, washing machines - for a little money you could buy anything in the world,' says one Warsaw resident. Bootleggers would whisper vodka or cigarettes and offered products they had smuggled over the eastern border. 'A vendor whispered 'love only me' to me. He wanted to sell a pirated copy of a film with this title,' remembers Ewelyna, a student. 'You could rent Russian movies. In tiny bars there were Vietnamese dishes, cocktails made from beans and fruits, crazy stuff. You won't find something like that in Poland ever again,' she adds. She thinks the new stadium is just a status symbol. 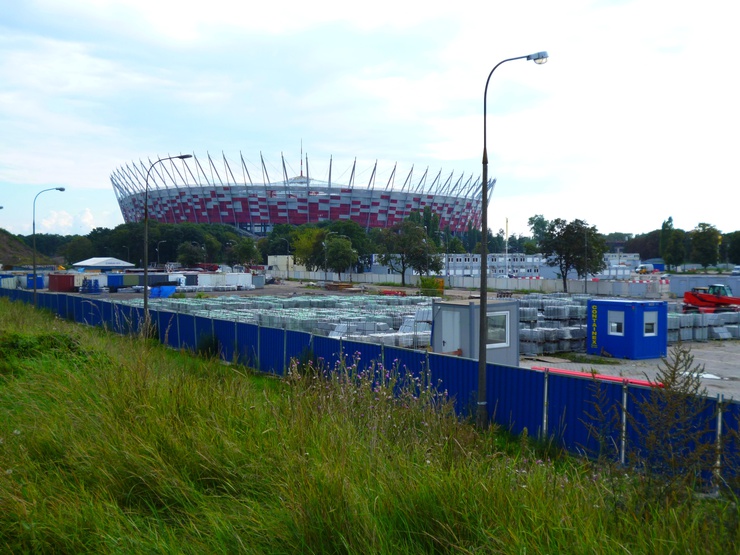 On the north side of the construction site, in front of the entrance to the stadium's train station, a few booths are covered with plastic sheeting - the last remains of the market. Shoppers swarm the walkways, which have been covered with cardboard to keep off the mud. Someone furtively offers me papieroski (cigarettes). Counterfeit designer jeans and polyester jumpers flutter like flags in the wind. A grill offers coffee and chops. A vendor remarks that even the remains of the market will be torn down when euro 2012 begins. Thousands of sellers like herself will have to find a new place to set up shop. 'It was easy to find work at the bazaar,' she says. Though there are jobs in the new shopping centre where the market was relocated, the complex is too small and is located far out of the way.

Read 'Euro 2012 in Warsaw: hanging around the stadium' on cafebabel.com

'If the public is watching Poland because of euro 2012, then it must appear presentable. The fair was a dump,' says a young man waiting for the bus. 'Just look at that!' he tells me, indicating the crude stalls, vendors and polyester jumpers with a wave of his arm. He is one of the many Warsaw residents who are happy that the brudasy, those dirty people, are finally gone. 'I'm proud of our new stadium,' he says. 'It signifies that Poland is now a European country.' In the background, the national colours rise into the sky on the stadium. Seen from here it looks like something from another era.