EU-Turkey: Atatürk and Charlemagne on your euro notes

It is simply accepted that any new member will fit into and accept EU symbols as their own. Turkey will have to accept this, just like others member states have done in the past and will do in the future...but here are some ideas for a future European Union and Turkey via branding national myths and symbols

The national identities of the existing 27 EU member states are not represented in the current symbols of EU. These symbols are based on and are a duplication of Greco-Roman symbols merged into Christianity. The crowning of Charlemagne, King of the Franks, as holy Roman emperor by Pope Leo in 800AD, blended these three themes into one. They moved the Eastern Roman Empire (the Byzantine Empire) from Byzantium back to Rome, establishing the Holy Roman Empire in 962. Renaissance thinkers and artists have revived these Greco-Roman symbols and myths to underpin their work. The Egyptian economist Samir Amin writes that the addition of Hellenism was necessary for the creation and maintenance of this new European identity. This subtle but very obvious shift pivoted Greece and its cultural symbols as the centre of all European or western learning which adopted classical Greek cultural symbols as their own.

The symbol for EU culture is two lines drawn straight up and down, with another line on top that curls towards itself at both corners. The drawing symbolises a Doric column to represent culture, learning and civilisation, later adopted as the logo of Unesco (United Nations educational, scientific and cultural organisation), established in 1945, as a representation of the world’s nations united for a common goal. Does this Doric column also represent Europe’s Norse culture, or its Arab-Islamic heritage, or its various alliances with muslim empires such as the Osman ('Ottoman') Empire? EU’s official and non-official symbols connect its member states through their christian faith (without specifying various denominations), but make no allowances for Abraham’s other children. Furthermore, these EU symbols omit national flag colours, heroes, cultural myths and symbols or languages.

Charlemagne is accepted as the Father of Europe and thereby of the EU, with buildings and rooms named after him. Type in the words ‘Father of Europe’ into google, and the first hit is Charlemagne. But does his filial duty extend over his children in Turkey? EU’s unification with Turkey would look something like a statue of Mustafa Kemal Atatürk ('father of modern Turkey') in his western tailored suit and tie standing outside the EU council of minister’s building or the Charlemagne building. These two father figures could be visually be united in their common goal, as they would be united in their diversity. Could commemorative EU postage stamps assume the national identity of Türkey, Atatürk would be next to Charlemagne, with twelve yellow stars encircling his image and the words EU-Türkiye Cumhuriyeti (EU-Republic of Turkey) above his head. In reciprocation and in keeping with the spirit of being 'united in diversity' (as the EU motto runs) Turkey would have Charlemagne in his ceremonial robes and Frankish crown, encircled by the same twelve stars with the words Türkiye Cumhuriyeti–EU underneath. 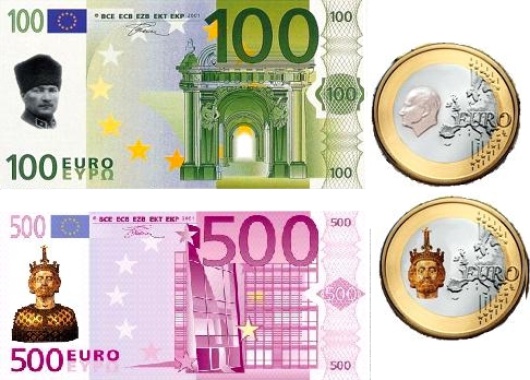 Images of national heroes are kept for the reverse side the euro, introduced in 2002 and now used by seventeen of the twenty-seven member states. The euro is written with the Greek letter epsilon. Finnish geographer Pauliina Raento points out the epsilon unifies Europa’s name, Hellenic culture and Greece as the cradle of European culture and civilisation.

So what should be on Türkey’s EU accession agenda talks? The myth of Europa is another example of being ‘united in diversity’, as it unites three continents in ancient and modern worlds. According to Homer, Europa was born in Asia Minor in the east, so Anatolia or modern-day Turkey. After Europa was abducted by Zeus in his form as a white bull, she spent her adult life with him and their three boys in Crete, Greece. Posthumously, Europa is considered as the geographical mother of a land mass. To complete this circle, Europa needs to acknowledge her filial and ancestor duties towards her Asia Minor children. Symbols like these will exasperate and perpetuate the existing mutual misunderstandings between Turkey and the EU. No matter how much each of them would like to understand the other, ultimately, without an adjustment of these symbols, their attempts will be lukewarm and ineffective.

This article is a brief summary of the opus by Hatice Sitki, ‘Myths, symbols and Branding: Türkish national identity and the EU’ VDM, Dr. Muller Aktiengesellschaft & Co. KG, 2009