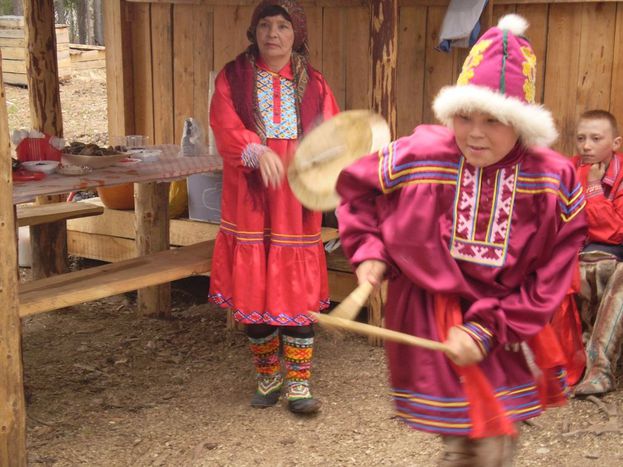 The resident taiga nomads are incongruous amidst the heads of state gathering in the oil boom town of Khanty-Mansiysk, between 26 and 27 June in western Siberia 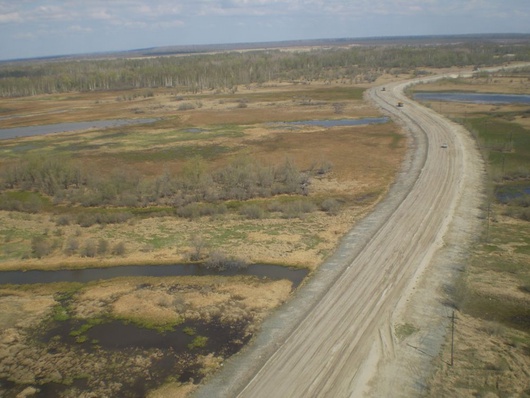 The nomadic people from Khanty and Mansiysk, after whom the summit town is named, live high above on the western Siberian taiga. High up, where no further streets lead, where there’s no electricity nor mobile phone reception. The hovercraft tears with speed along the ice-cold Ob river to the north. The journey to the small settlement of Nasim takes three hours from the oil boom town of Khanty-Mansiysk. Centuries lie between.

The tent settlement on the banks of the Ob river are only home to the nomads during the three short summer months. When the river freezes several metres thick during the winter, the clan wander through the seven picturesque hills of the taiga. The men hunt for deer and reindeer, even in a cold climate which can reach -60 degrees. It’s a hard life. Many of them lived in Khanty-Mansiysk during the Soviet times. The political party forced them to work on collective farms. After the collapse of the Soviet Union in 1991, they decamped in the taiga, picking up their traditional lifestyles again.

Like their ancestors once wanted to be independent from the modern world, explains Albina Dmitrowa. The petite old woman in a colourful dress and woollen shoes takes out freshly baked bread from the stone oven. She is muttering a poem to herself, that doesn’t sound like it is rudimentary Russian. ‘All the people are called Khanty,’ Albina Dmitrowa smiles. In her language, ‘Khanty’ is the word for ‘human’. The Kazym dialect is on the Unesco list of endangered languages. It is estimated that only between 10, 000 and 30, 000 people speak the various dialects still. The culture is dying out with the language too.

Bitter battle versus the oil giants

Khanty nomad Lydia Sudmanowa takes one day at a time. The lively woman is spokeswoman for the Nasim settlement. You can gauge that from the mobile phone that she carries around her neck in a self-embroidered front pocket. But she only gets reception a few kilometres upstream, direction south, she adds.

Over a dinner of fish soup and moose meat, Sudmanowa talks about her bitter fight against oil companies. Russian oilgiants like Rosneft, Lukoil, Surgutneftegas and Gazprom Neft produce the lion’s share of their income in her region. 70% of the formerly closed Russian oil resources lie buried in the western Siberian taiga. That makes up 7% of worldwide spluttering petroleum sources. 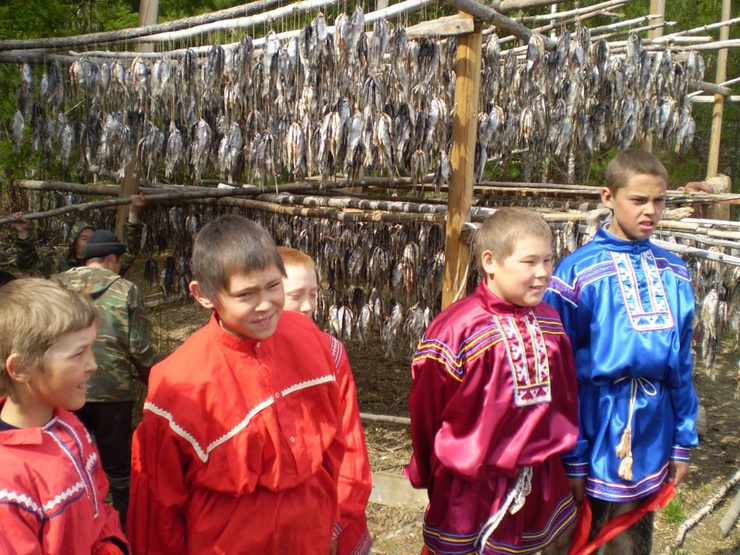 Russia’s oil boom has marked the taiga out: sand streets and concrete slabs corrugate the marshy landscape. A line of 300 lorries provide the daily supply of technology and machinery to one single oil field. Pipelines draw like silver snakes through the marshes. Lydia Sudmanowa glances sadly upstream. ‘As they build bridges, the river is being filled with sand,’ she sighs. The banks near the settlement are heavily drained, and the sand is almost black. Is it because of oil? She shrugs her shoulders. ‘What else can it be; there is no other industry here.’

Environmental organisation Greenpeace keeps regular updates on the region: almost 300 damages from oil discharges from up to 100, 000 tons are reported annually – and that’s just what is registered officially. Nevertheless, Lydia Sudmanowa is hopeful. The Khanty-Mansiysk alliance have been negotiating with oil companies throughout the year. They have even gone before the courts, with environmental damage as their main suit. But only one thing has been effective: the fact that oil won’t be there forever.

Ecotourism: a weapon against environmental damage

Alexander Fillipenko, the governer of the autonomous area, has overseen these proceedings. The reserves will be empty within a hundred years, he says, quoting a prognosis by the local research institute. ‘We have to build other economic branches,’ he declares. He wants to make Khanty-Mansiysk a tourist attraction, a glimpse of which comes from the souvenir shops lining the freshly-plastered shopping street of the administrative capital: Khanty-Mansiysk’s culture will become the signboard for the future recreation area.

A school will be built in a bigger village twenty minutes away from the Nasim settlement. The concrete slabs have already been offloaded from the ships. Plans for a hospital and cold storage place with its own power generator are also underway. Lydia Sudmanowa is beaming. But the situation has only improved a little bit, she has to admit. The lack of education and the men’s alcohol addictions are hard to grapple with.

It means a lot to Lydia Sudmanowa that president Dmitry Medvedev will make his presidential debut in her town for the EU-Russia summit. ‘It’s a sign that they take us seriously in Moscow too.’ Before he became president in March 2008, Medvedev was supervising chief of gas giant Gazprom, whose sister company Gazprom Neft operates eight fields in the region. Medvedev can show the west a new side of the Russian oil industry: an enviromentally conscious and socially responsible one, in an effort to improve this bad image too.