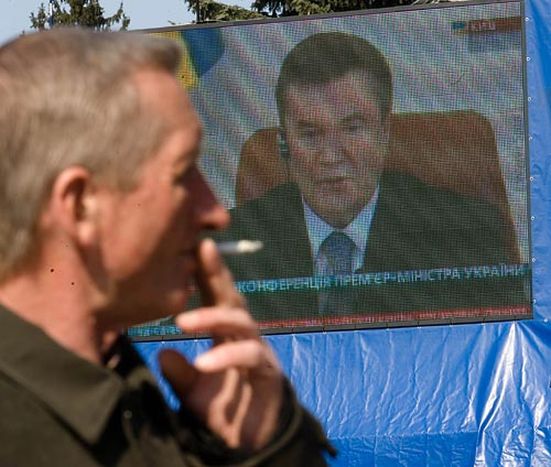 Five years after he was deposed by the Orange Revolution, the opposition leader won Ukraine's presidential elections on 7 February, narrowly edging out prime minister Yulia Tymoshenko in a runoff vote.

The Swiss, Czech, Polish and Portuguese press bemoan the rise to power of a politician who is widely regarded as pro-Russian, but believes that Ukraine has now finally proven that it is truly democratic

The presidential elections have shown that there is genuine political competition and diversity of opinion in Ukraine, the daily points out, saying this is the fruit of the Orange Revolution in 2004: 'In the years following independence the spectre of a divided Ukraine split into an eastern and a western half was repeatedly conjured up. Even during the Orange Revolution the regional differences grew more pronounced. Today the danger of Ukraine being shattered by its regional differences seems to have been banished. The state has consolidated within its existing borders. The ethnic, social, cultural and linguistic differences force Ukrainian politicians to seek a democratic balance of interests. It is one of the major achievements of the Orange Revolution that the concept of a political nation of citizens not based on ethnic criteria has won the day' (Cyrill Stieger)

Although the conservative daily would have preferred a different outcome to Ukraine's presidential elections it says that they won't affect the country's free constitutional order: 'Perhaps the 'Orange' Ukraine hasn't moved as close to Europe as we would have wished. But despite all its shortcomings the country is far ahead of authoritarian Russia on the decisive question of freedom. The EU has done too little for Ukraine in recent years. Therefore the defeat of the 'Orange' camp is also a defeat for the Union. With [president designate] Viktor Yanukovych everything will no doubt get worse, but Ukraine remains a democratic country. A free Ukraine is the best and the right European answer to the Putinisation of Russia' (Luboš Palata)

Despite the election victory of Viktor Yanukovych, who is widely regarded as pro-Russian, Poland should not turn its back on Ukraine, the conservative daily writes: 'We must be more active than ever regarding our Ukrainian neighbour. Viktor Yanukovych may be decried as a pro-Russian politician but his main attribute is pragmatism. In the end his election does not decide anything. Rather we can expect more bickering about the most important issues. So we need to put all the more effort into convincing the Ukrainians that the pro-European course is the more profitable one, that Poland continues to advocate their interests within the EU and Nato, and that we want to continue working with them - no matter who's in power in Kiev' (Piotr Kościński)

The victory of pro-Russian opposition leader Viktor Yanukovych in the Ukrainian presidential elections could strengthen Russia's influence in the region, writes the daily: 'Yanukovych's victory ushers in a new period of instability for Ukraine, and that cannot be a matter of indifference for the rest of Europe. This enormous European country (larger than France or Spain) with a population of 46 million is in a position to unsettle the balance of power in the entire region. Moscow has already seen three of its former republics join Nato: Estonia, Latvia and Lithuania'