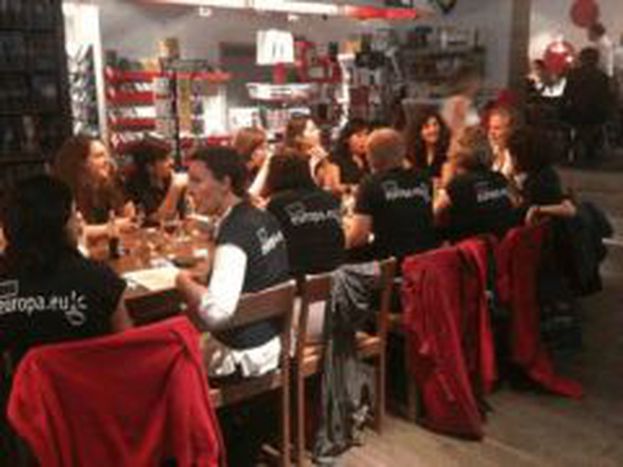 By Aurélie Feller, translated by Iulia Bunea Thursday, February 17, 8.30 pm, the European geek girl had their seventh meeting, in a restaurant on Square de Londres in Brussels. It was an informal meeting of European communication professionals. It was a meeting of hyper-connected daughters with smart phones in their pocket and a thing for Twitter, mail boxes, blogs and European news.

They are lobbyists, consultants, functionaires, geeks of every age and industry who work in the European bubble. They buzz around the same bubble but never meet. And this meeting is not an occasion for small talk, but for networking. It allows them to make new connections to advance their projects, to find advice and to exchange useful information. This is a domain where women are often perceived to be less active than men. So, for them, this meeting is about evening out the balance.

According to two of the founders, Europasionaria and Lobby planet, it’s important to support each other in a European environment dominated by men.

This band of EU girl geeks is more like a blog network of girls who talk in their own manner about European affairs. These bloggers talk about politics with confidence and originality. These women acknowledge that feminine political blogs are rare, but that they are among most influential blogs. For them, this fracture in numbers and in ranking is a proof of male/femal disparities in the area of management. Their idea is to join forces and to support each other. “Women don’t take the floor enough in the public debate, they don’t think that what they have to say is important”, Europasionaria says.

For them, this occasion means leaving the office and meeting up for and animated and uninhibited evening. Lobby Planet, which also has an office at the satiric newspaper the Brussels Jungle, confesses that they love to “Titillate Europe, but men also”. With more than 500 followers on Twitter, their idea has aroused curiosity, mostly among men. Men are a showing an interest in gender issues, for once, and that’s what geek girls find astonishing. It's the men’s turn to feel left out. “They often ask to join us in our meetings, and we tell them that they can only come if they have a total hair removal!”