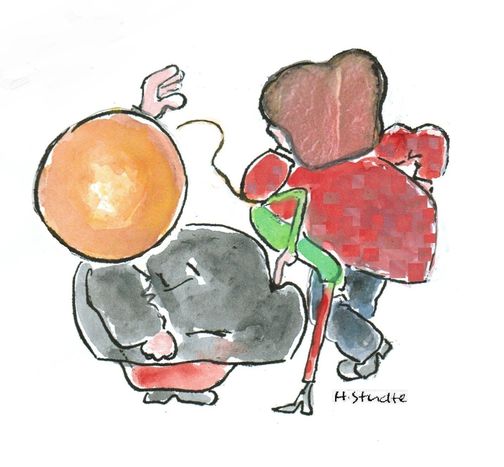 Ethnic slurs: Polacks and roast beef versus frogs and krauts

Europeans call each other the most unfriendly pet names in the trend of the phenomenon of ‘etnopaulism’, which refers to those disparaging vocabularies used when talking about other people. Word dilemmas of the week

Naughty nicknames about our European neighbours popularly refer to physical aspects. The French Boche derives from albosh (a contraction of Allemand meaning German and bosh meaning foremen) - all in all, Germans are hardheads. The English merely need to pop to the beach to turn red like a Rosbeef (or roast beef, as they are called in the South of France) or like mangosta (lobsters) and cangrejos (crabs), as they are affectionately referred to in Spain.

However, most nicknames have originated from conflicts, often dripping with blood. In Serbo-Croatian, kruh means bread. Its most famous association is when the poor soldiers of the Austrian empire exclaimed Kruh! when starving and captured by the Italians during world war one, turning it into a nickname for them. The Italians became Itaker (‘Italienischer Kamarad’ or Italian camerades) for the Germans and Austrians during the same period. The French renamed the hostile Germans after a Moroccan tribe that made them sweat during the colonial period: Chleuh.

Hate and disdain are especially stirred up when peoples jobs are ‘stolen’, as in the sad story of the Ritals, or how the Italians are referred to by the French. Tens of Piemontese (from the northern Italian area of Piemonte) were massacred by their French colleagues in 1893, guilty of being willing to work for two-thirds of the average salary. Similarly, ethnic slurs for the Polish make them into Polacks and the Portuguese Portos. Now, the vendetta against the French has been taken up by the Spanish, who refer to them as gabachos. According to the most accredited theory this derives from the Occitan word gavats, meaning unwrought peasants – barbarians like the Gauls, basically. The Alpines eat frogs, so it’s easy for the English to call the French exactly that. But if the Spanish call us Italians Spaghetti the English call us Maccaroni, I guess after that whirlwind tour we can only feel flattered.