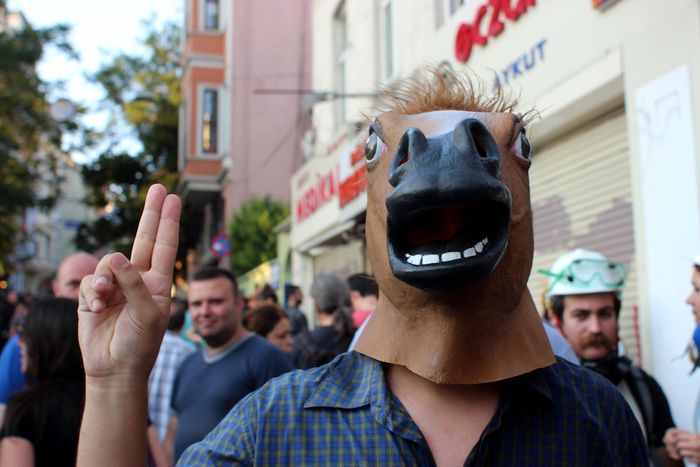 Turkey's Islamic-conservative AKP party lost its majority in Sunday's general elections. The left-leaning pro-Kurdish HDP won over 10% of the vote to enter parliament for the first time. Turkish civil society been critical of AKP's authoritarian style, some commentators write in delight. Others warn of political instability on Europe's border with the Middle East.

The AKP may still be the strongest party in the country but the real winner of this election is democracy, the website of the public broadcaster tagesschau.de comments: "A majority of Turkish voters have given a clear thumbs down to their president's autocratic and authoritarian ambitions. ...  But all those who delight at the results must not forget one thing: 13 years of absolute majority for the AKP have brought Turkey a stability that it hasn't seen for many, many years. Is the threat of that Turkish paradigm of unstable coalitions that paralyse each other and bring stagnation and uncertainty to the country now looming on the horizon? Not necessarily. The election outcome isn't the only encouraging thing about these elections. The commitment of tens of thousands of observers and helpers clearly shows that Turkey has an active, vibrant and functioning civil society, one that not only pays lip service to democracy but also lives it to the full." (07/06/2015)

President Recep Tayyip Erdoğan has been punished for his arrogance, the centre-right daily Corriere della Sera writes in delight at the outcome of the Turkish elections: "The president should have limited himself to playing a minor role in the campaign. Instead, Koran in hand, Erdoğan tried to convince the Turkish people that only he can govern the country. ... The people said no. Turkish society has developed a force of resistance to the president's arrogance in the form of a young Kurdish politician who decided to make a national political force out of the HDP by sweeping aside scepticism and prejudice. With his sober style and his powers of persuasion, 42-year-old Selahattin Demirtaş has broken a taboo: election to the national parliament for the party of the Kurds who have been suspected of all kinds of things in the past." (08.06.2015)

Turkey's governing AKP lost many votes in Sunday's elections, particularly in the cities and among the Kurdish population in the east of the country. After thirteen years in power it must rediscover its enthusiasm for reform, the pro-government daily Sabah urges: "The AKP's paradigm of the 'new Turkey' must be given a more reform-oriented perspective. Despite the [banned Kurdish Workers' Party] PKK and the HDP, it should resolutely welcome the peace process as a civil project. ... The reasons for the loss of votes in the region must be examined. ... To appease its reform-minded grass roots, it must concentrate on the new constitution and question the presidential system, whose objectives have been sketched out only superficially. The AKP should ask why it hasn't been able to appeal to the young, and it must adopt a modern rhetoric between tradition and the future." (08.06.2015)

Turkey is facing a period of political uncertainty that could have repercussions for all Europe, the business paper De Tijd comments: "Turkey lies on the geopolitically sensitive intersection between Europe, the Middle East and Russia. Not without reason is it a Nato partner. The country's political future is therefore also important for Europe. Erdoğan's stubborn course is causing ruptures not only in Europe. Southern Turkey borders on Syria and Iraq, where the IS terrorist organisation is strongest and the Kurds are demanding their own region. … Against this background Russian President Vladimir Putin is trying to strengthen his connection with Turkey. The more Erdoğan is pushed into a corner, the better Putin's chances are. The coming months will be decisive, not just for Turkish democracy but also for Turkey's position in the geopolitical landscape." (08.06.2015)