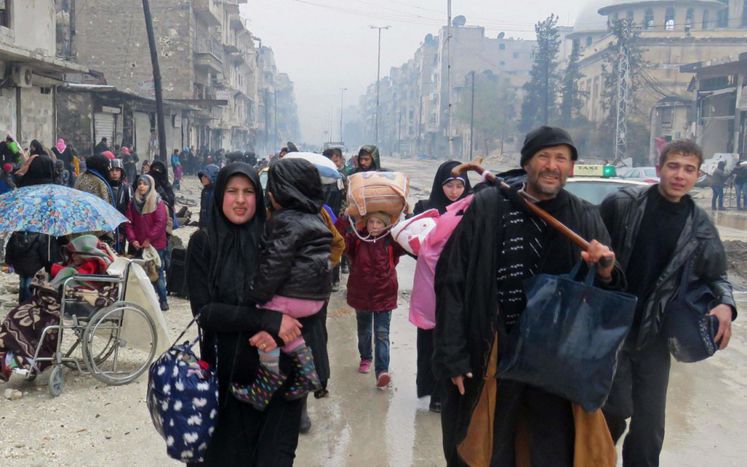 [eng] The ordeal continues for Aleppo despite the ceasefire

Iranian Shiite militias targeted the convoy of civilians trying to leave Aleppo this morning, leaving one dead and four wounded. As the first convoy of buses set off out of the city, it was hit by a rocket attack fired by the Iranian Pasdaran who are coordinating operations to retake the city of Aleppo.

The Iranian regime is trying to prevent the humanitarian operation under the pretext of the fate that befell two Shiite villages at the hands of Syrian rebel forces.

The ordeal went on all throughout Wednesday and bombing is continuing in the last few square kilometres of Eastern Aleppo not yet under the control of the Syrian army.

Some 50 000 people are still under threat of bombardment. Interviewed about the Iranian regime’s opposition to the evacuation of the inhabitants of Aleppo, Afchine Alavi of the Iranian opposition party National Council of Resistance of Iran called Teheran’s strategy “a plan to reduce Aleppo to a cemetery”

He added that “The Mullahs, their Revolutionary Guard, and their criminal militias are continuing the policy they have held since the beginning of the Syrian civil war, namely, to block any solution other than a ‘cemetery peace’ ”

Members of the Iranian Revolutionary Guard (Pasdaran) and Iranian-backed Shiite militias are fighting alongside Bachar Assad in the battle for Aleppo.

According to Reuters, a UN spokesman acknowledged that “Iran” had imposed new conditions on the evacuation of civilians and insurgent fighters from Aleppo. Subsequently the truce broke down and the evacuation was halted.

According to a representative of the Free Syrian Army (FSA) quoted by Reuters, the Iranian forces “refused to let people leave, they used a number of excuses including the examples of Foua and Kefraya (two Shiite villages in the Idlib province) but this was above all an excuse, an excuse to bring about the failure of the agreement because Iran does not want it to succeed”

“The Iranian militias have jeopardised the ceasefire in the besieged areas of Aleppo” the spokesman for a Syrian opposition group, Nour al-Dine al-Zinki asserted to Reuters.

Afchine Alavi, a member of the Foreign Affairs Committee of the National Council of Resistance of Iran called on the international community not to allow themselves “to be duped by Teheran’s lies and the pretexts his regime presents, the world must firmly refute all his excuses”

He added “The fact that the government of the Mullahs is blocking a solution, shows that Bachar Assad is just Teheran’s puppet. It also shows that the Revolutionary Guard are the agents behind the massacre in Aleppo and in Syria. This is why in order to obtain any solution at all in this conflict, the first action should be to prevent interference in this country’s affairs by Iran’s mullahs and rid it of the Pasdaran and their foreign militias, who are no better than Daesh”

The NCRI revealed that the main command HQ and barracks for the Pasdaran participating in the offensive against Aleppo are 30km south of Aleppo (5km south of the town of Al-Safira), at a base called “Bahouth”. This base is commanded by Brigadier General Seyed Djavad Ghafari, Commander in Chief of the Pasdaran in Syria.