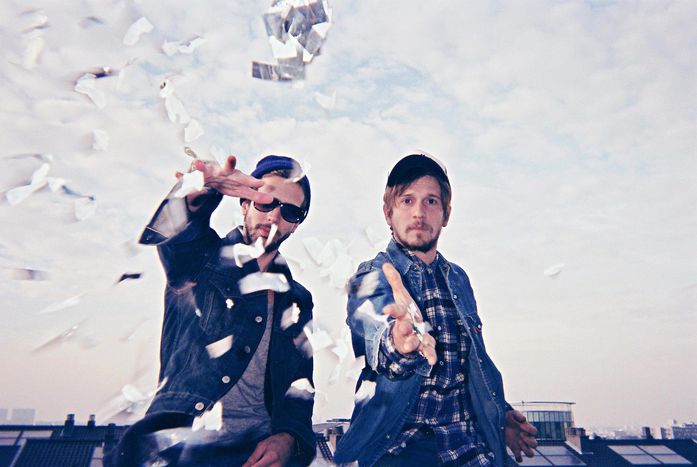 One band was just not enough for Ben (The Tellers) and Aurelio (Lucy Lucy). In 2012 they founded Paon (peacock in French). After releasing their first EP in March last year, they now work at 4 on their first album, expected for 2015. A few days ago, the feathered quartet was in Paris for the Chorus Festival. Quick-interview.

cafébabel: You describe your style as « surf animal », what is it exactly ?

Au­re­lio: It’s a dolphin with a guitar and a seal playing bass in Pas-de-Calais! (laughs) ! (rires)

Jerem (bass player):  We worked on the album in a rented house on the coast of Pas-de-Calais. We spent a lot of time there and we could go to the beach whenever we wanted. When we had to define what kind of music we did, it was a bit tricky and then, we saw a surfer. Since our name was Paon, we just said “We do surf animal!”. It’s “surf” because it has a fun aspect to it, we just get really smashed …

Au­re­lio: On stage, not in real life!

cafébabel: Why did you choose Paon as your name ?

Au­re­lio: That one time we were on the beach … (laughs)Alors on était à la mer … (rires)

Jerem: It was the name one of our friends had chosen for one of his projects actually. We stole it! Well, at first he was fine with us taking it but then he regretted it. However we had already started advertising under that name so he wasn’t able to take it back; he’s still our friend though!

Paon - Shine Over Me

cafébabel: Why did you create a new band when you all already had other bands to perform with ?

Au­re­lio:Ben and I we were in a hazy sort of stage when our tours ended. We didn’t know if we were going to continue with our bands, we were quite lost. At first we just wanted to have fun, we started playing just for the thrill of it. Some people liked the demos, we went into the studio and quickly we had the chance to open for Alt-J or Brigitte, it was great!

Jerem: I used to be in a band with Aurelio. Ben and him said early on that they did not want to take in anyone they had previously played with. But I had just spent a year abroad and I didn’t have any band to play with. One night, we just played together, they liked what I did on the guitar so they kept me!

Au­re­lio: Leo (the drummer, editor's note),is a friend of a friend. We happened to play with him one night and we knew from the first rehearsal that he was going to be a great addition to the band. He really adds something special, he has a very peculiar way of playing.

Jerem: We all have something outside of Paon. Leo has another band, that is a bit crazy, it’s psychedelic acoustics, Ben has the Tellers and Aurelio the parakeets (laughs)! But we sort of blend everything together in Paon!