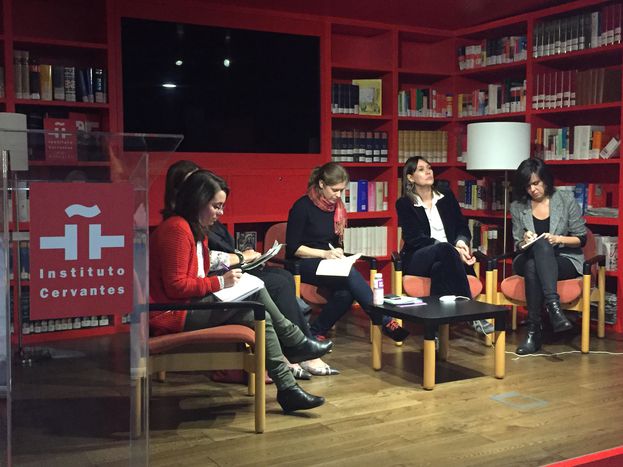 With the aim of promoting respect for young girls´ rights and to ensure that the European Union protects these rights in its policies and programmes, the European Week of Action for Girls will take place in Brussels each October. Within this framework, the Instituto Cervantes hosted a screening of "New Girls 24 Hours", a documentary by Mabel Lozano.

From 10 until 14 October, Brussels becomes a real hotbed of events designed to spread awareness on the type of exploitation that children suffer in Europe. With the aim of putting an end to the invisibility of the trafficking of women, which appears to be a problem of faraway countries with exotic names, the European Week of Action for Girls seeks t raise awareness of and prevent this problem.  After all, Europe is the destination in which Mafia and traffickers choose to sell their products: women.

It cannot be ignored that in Europe, the highest demand for prostitution is in Spain.  A sad, retrogressive and dark reality which doesn´t match up to the ideals of equality and protection for women promoted by the government. This lack of awareness is where the problem lies: the invisibility of the treatment and exploitation which women, especially young girls, are subjected to in the purchasing of sex business.

The screening of the documentary "New Girls 24 Hours", Monday 10 October, was to kick-start a week full of events to raise awareness amongst the European population of the problems, now standard, of prostitution consumption.  In the Instituto Cervantes in Brussels, film director Mabel Lozano met with European Parliamant member Inés Ayala, to finish off the successful screening with a talk at the well-attended event in the Spanish Institute.

The success in the number of attendees was more than justified: the investigation work behind the documentary is simply magnificent. "New Girls 24 Hours" is a journey, told in very personal terms, taking us through Peru, Paraguay and Colombia ending in Spain, the host country of exploited women, demonstrating how women and girls are subjected to the prostitution consumer.

It is a true story which is happening daily on the streets of Spain. So, why do we feel like it is happening so far away? Because they are stories of invisible women, pieces of meat which go unnoticed by you and me. Invisible because neither you nor me stop to think that maybe these women are being exploited and we become accomplices in the abuse, trafficking and exploitation.

Sex trafficking "strips" women of their rights, deprives them of every ounce of dignity, turning them into yet another link in the chain of supply and demand. It turns them into mere pieces of meat. In fact, meat is the most heard word in the screening room.

Why should we continue to call them customers, the accomplices of sex trafficking? Because the woman, despite being exploited and abused, is, once again, unprotected by law.  If we really want to put an end to sexual exploitation, we must start with the law. A law which prohibits abuse and calls things by their true name, because the customer becomes an exploiter when they deprive women of their dignity.

According to Mabel, the simple act of using a language that is inclusive could be the most efficient way to raise awareness and amongst a population which, as the director believes, sees prostitution as just another type of leisure activity. And this is the problem, leisure stops being leisure when its involves a violation of basic human rights. Because the terms trafficking and prostitution could well be synonyms since, as Mabel assures, in the majority of cases, prostitutions is not entered into freely.

The fact that sex trafficking starts with demand makes documentaries like "New Girls 24 Hours" indispensable in the work of raising people´s awareness: we must not forget that in Europe, Spain has the highest demand, which turns the Spanish population into accomplices of the silence that stops 13,500 women in Spain from being able to be in charge of their own life. Moreover, the glamorous world that the erotic nightclubs promote is actually a front to hide the dark world operating inside.  A world full of invisible women, at the service of the male who feels stronger, younger and more man while beating, abusing and exploiting a woman.