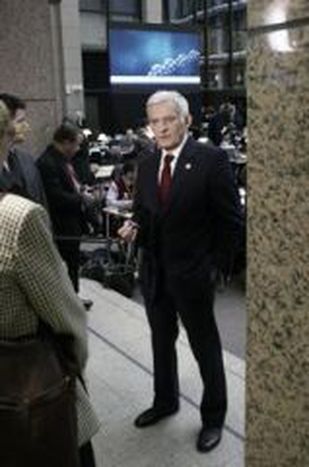 Energy is still the most important for EU 2020. Jerzy Buzek, President of the European Parliament, has given a short speech focusing on the situation in North Africa and on energy.

He opened his speech by letting gathered journalists know that we can not remain indifferent towards the many calls for democracy in North Africa, and that we should be ready to support democratic change. In a much more extensive paper outlining the EPs position, we learn that the European Parliament will be a constructive partner in this case. Whatever that means.

"Energy is the main theme in the 'EU Strategy 2020'', we are told by Buzek. He gave information on the European Energy Community, which he first spoke about in May 2010. The 'new EEC is designed to gather "the ideas currently on the table together and to bring about a shift in the way we think about energy".

He believes that European institutions have already achieved the first three requirements of the new EEC, "but we need to do more. " And for that, in the next 10 years 200 billion euros is needed.

After his mini-speech, there was still time for a few questions. An Italian journalist asked a question that immediately Buzek didn't understand because of problems with the headset. Perhaps that why he suddenly got confused and asserted that the "Competitiveness and Growth Pact" is the main theme of the EU strategy for 2020. But that has not yet been discussed in Parliament.

And so it remains, until further notice, that energy is still number one on Europe "to do" list.