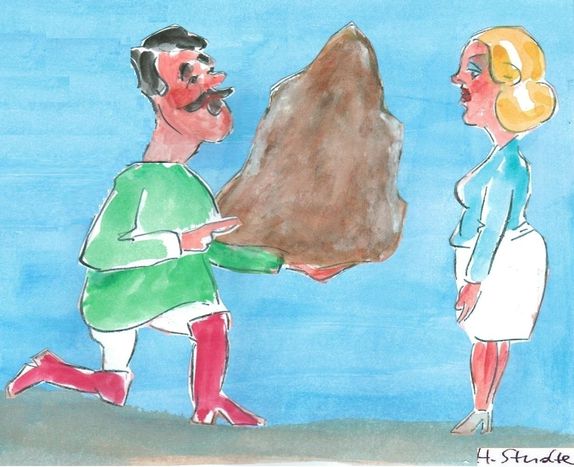 The English expression about promises that can’t be kept translate to far more natural and colourful imagery in other European languages. Be they ‘mountains of gold’ in French or the ‘blue of the sky’ in German, Europeans sure know how express false promises in a charming and poetic way

As the famous French general Napoleon I once said: ‘If you wish to be success in the world, promise everything, deliver nothing’. Is that why the French tend to ‘promise small mountains and marvels’ (promettre monts et merveilles)? It may not be so unique, considering in Italy and Croatia they ‘promise the mountains and the sea’ (promettere mari e monti) and ‘mountains and valleys’ (Obećati brda i doline). Could it just be that all around Europe we are all so inspired by our mountainous landscape that we can’t help but be moved into lyrical promise-making?

In fact, the French expression dates back to the turn of the 13th century when ‘mont’ meant a large quantity of something and the expression ‘to tell evils and marvels’ (raconter des maux et merveilles) meant to tell fabulous stories. The expressions merged in the 16th century to form promettre monts et marveilles. Germans use the creative and unique expression ‘to promise the blue of the sky’ (das Blaue vom Himmel versprechen) which is described as 'poetic and beautiful, inherently has something forgiving to it' in a review of the 2011German movie of the same title.

If promising mountains or the color blue isn’t enough, adding a bit of precious gold might do the trick. At least in Holland (Gouden bergen beloven), Poland (Obiecywać złote góry) and Russia (obetchat zolotie gori), ‘promising golden mountains’ or ‘mountains of gold’ is a common practice. The Danes promise ‘gold and green forests’ (Love guld og grønne skove). In Spain and Argentina, the gold rush promise goes beyond natural with their expression: ‘to promise the gold and the moor (a North African person)’. This expression dates back to the wars of the Reconquest when Abdalà, the warden of the Malagan city of Ronda and his nephew Hamet were captured in an armed raid in Jerez. Abdalà quickly paid his way out of captivity, but they wouldn’t release his nephew for any sum of money, despite the request of King John II of Castille. After collecting lots of gold, they finally transferred Hamet to the courts but the saying stuck among the locals: ‘to keep the gold and the Moor’ (prometer el oro y el moro).