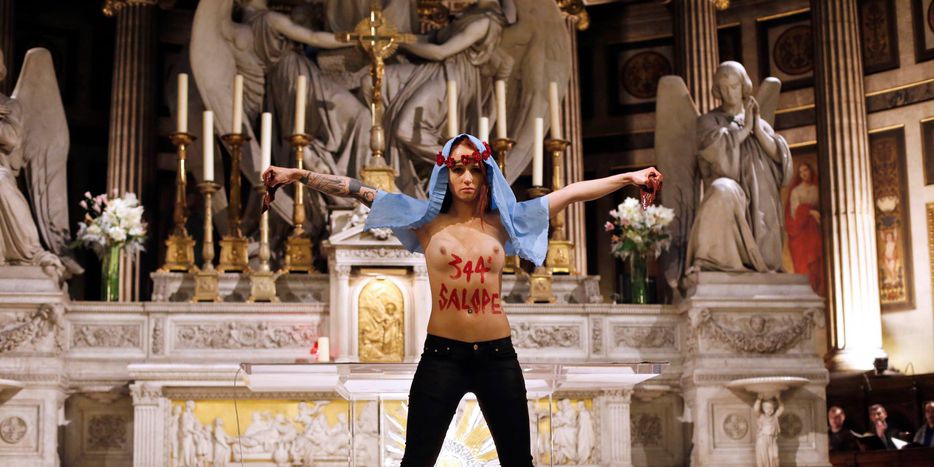 With or without a shirt, Eloïse Bouton has feminism chained to her body. In honour of the release of her book Confession d'une ex-Femen, Bouton goes reflects back on her journey as an activist, from the playground to the dock in court. Check out our interview with her:

"Did you see La Barbe's latest demonstration? We were a pain in the ass for them until the end." Eloïse Bouton has a frank look and way of speaking. At a table in the Maroquinerie de Paris, the thirty-year-old with red nails rejoices in having been part of this feminist group's recent stunt.

On February 10th, ten or so women with fake beards interrupted an economics debate organised on the premises of Le Monde to denounce their male overrepresentation - 16 of 17 participants were men. "It's the same theatric side, very ironic, that I liked in Femen at the beginning," remarks the journalist, who was discovered by the public in 2012 without facial hair, and, especially, without a shirt, along with other activists that came from Ukraine to liberate women.

After the media's storm

This Monday evening, the calm that reigns in the Maroquinerie (the acoustics of which Eloïse greatly praised) is what sets the mood. Far from the agitation of her two years of breast-baring activism, this redhead tranquilly sips a blonde ale in an almost empty room. In writing her book Confession d'une ex-Femen (Confessions of an ex-Femen), she seems to have turned the page. "Can I smoke an e-cig?" she asks. For someone who never asked for permission to shock people in the middle of Paris, at public gatherings, or in a church, this is indeed a turnaround. 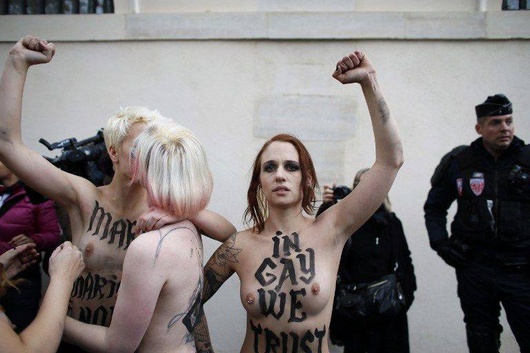 "For a moment, I was embarassed," she admits, when talking about her first topless demonstration at the  London Olympics. Now wearing a big blue sweater that hides her tattoos, Eloïse didn't suddenly become sensitive to the cold. She still finds using the tool for marketing and submission that is a woman's body to send an opposite message is "great." As if to reassure those who are shocked by political nudity, she adds that even at the beach, she struggles to go topless. "I'm not an exhibitionist."

A wink to the criminal court who, for this, sentenced her in December to a month of house arrest, on top of a 1500 euro fine and 2000 euros in damages for the priest of the Madeleine. These events go back to December 20th, 2013. While in Spain Mariano Rajoy was thinking of restricting the access to abortions, armed with two veal livers, Eloïse entered the church to mime the abortion of Jesus.

Ten years is a fair way off, however. Bouton maintains she's "always been a feminist." At a young age, she already noticed a difference in she and her brother were treated, having amassed comments on her clothes or deep voice, all while defending her female friends. Without knowledge of machismo, the young Eloïse had the impression that girls were "open to judgement." This was a feeling that she consolidated in high school, through reading.

Unsurprisingly, the first books to appear on her bookshelf were those of Violette Leduc and Simone de Beauvoir. But not Deuxième Sexe, but rather L'Invitée, a novel in which Simone de Beauvoir unveils the intimacy of the open relationship she had with Jean-Paul Sartre. "I'd never read anything where a woman spoke about her sexuality in that way before," she recalls. Then black feminists like bell hooks or Kimberlé Crenshaw who theorise on the notion of intersectionality (the interaction of different types of discrimination at once) appeared on the shelves. "That was a powerful slap in the face for me!" So powerful, indeed, that Bouton now specialises in African-American protest movements, is writing a memoir on women in hip-hop, and is pursuing her studies in New York, while also fighting for LGBT rights. 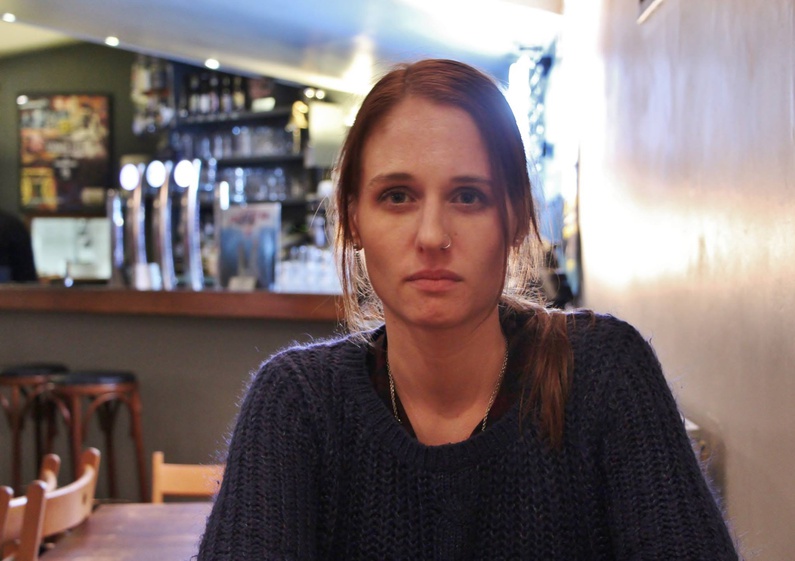 Back in Paris, she is trying to find herself politically. She wonders whether to join the Verts ecological movement, and is put off by the lack of equality in the Socialist Party. She has been to a few meetings of Ni Putes Ni Soumises (Neither Whores Nor Submissive), and often passes through Osez le Féminisme (Dare Feminism) and has been enlisted in La Barbe for two years.

"I needed something more radical," she remembers. It's what she found with Femen. But the honeymoon period only lasts a while. "We spent all our days together, but we didn't know anything about each other," she summarises, while poking at an olive. The "military" training of the activists isn't attractive to her, as she defines her personality as "wild child on her little rock." Then one morning in 2013, a rumour exploded on the Internet: supposedly, Eloïse was Femen by day, and an escort by night.

The feminist organization, though radically opposed to prostituion, offered no support. A few months later, Femen wrongly accused her of being the "mole" that spoke to the newspaper Le Figaro. Hurt, she permanently left the movement in February 2014 and wrote, in the heat of the moment, Confessions d'une ex-Femen as therapy, more for herself than as revenge.

She saves her anger for daily acts of discrimination. In her job as a journalist, for example, the label of "feminist" drags her down. When she was a part of Femen, no one accepted her freelancing. Today, if she proposes topics related to women, or questions of that type, her objectivity is systematically questioned, because she still brings punctual support to certain organizations. "What we call objectivity today is the viewpoint of a fifty-year-old white male," she retorts.

And that isn't all... "The other day, at a dinner, all my female friends were degree holders and hard up, while all the men present, who sometimes didn't even have a baccalaureate, were doing well enough." Coincidence? She doesn't think so. Among the things that darken her green eyes are "the men who don't recognize their privileges," as well as "street harassment," "oh, and the salary differences, of course."

"We could talk about all this for hours," she concludes, while ordering another half-pint.