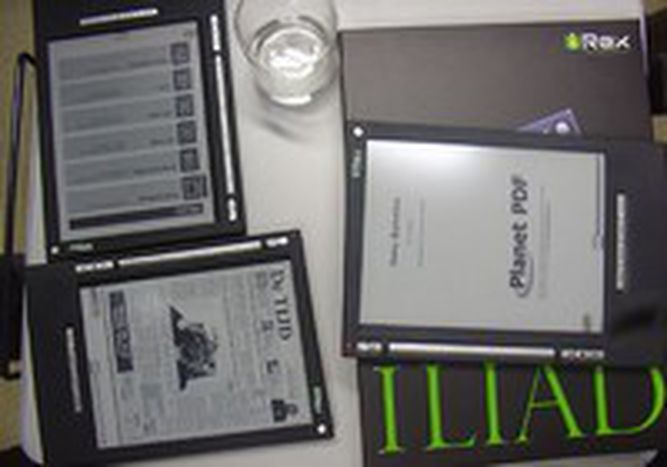 What if, tomorrow, we hold in our hands the equivalent of the Daily Prophet from the Harry Potter adventures or USA Today as envisaged by Spielberg in his film ‘Minority Report’? With text displayed on plastic-coated paper, we would turn the pages virtually with a click, and illustrations would come to life. OK - tomorrow, it probably won't happen, but why not the day after? For Bruno Rives, founder of Tebaldo, an agency involved in new technological trends and usages, there is no doubt that 'we are now in year zero of electronic paper.'

The concept has existed for several decades. But it has now reached its 'technological maturity', according to Jacques Angelé, director of technological programmes for Nemoptic, a French company at the cutting edge of e-paper development. 'Ideally, this new object weighs 150 to 200 grams, is 5mm thick, and 7 to 8 inches diagonal. It must be simple to use and be constantly updated; if not, it’s just another PDA or palmtop.' After several unsuccessful attempts, like the Cybook launched in 2000 by French company Cytale, the e-paper is now ready.

On your marks, get set…… develop!

Numerous businesses are positioning themselves so as not to miss the boat, as it is all expected to move very quickly. Angelé predicts that, 'everything will play out over the next three years.' Until then, the main players in this market are getting a foothold and we will certainly see a 'bonus for the first on board.'

Europe and its innovative businesses are well positioned for when the time comes, but the competition will be fierce, both in the development of this little technological marvel, and in its applications in the press or in publishing.

Even the first electronic ink is European! 'Of course, E-ink comes from American MIT, but the patent for it was given to Philips, a European, so that it’s integrated with the paper,' explains Rives. European companies are blossoming: Nemoptic (France) is developing electronic ink, Plastic Logic (UK) is working on the paper whilst Ganaxa (France) is thinking about the software.

Elsewhere, in January, Plastic Logic announced the installation of a new factory in Dresden, East Germany, to develop its e-paper. It'll be the first centre in the world producing flexible plastic screens. 100 million Euros was invested in ‘Silicon Saxony’, which beat New York and Singapore to the contract. And this is indeed where the competition lies. 'We are good at technological supplies, but much less so at situating ourselves in the markets,' according to Rives.

Most of all, stay ahead of the game

How can we fight, or even just resist when faced with the Chinese, Japanese and Americans? Angelé believes we must 'unite the players to propose competitive solutions, and not just defence strategies. With an acute awareness of the economic interests at stake, we could energise the industry, anticipate the evolutions and even facilitate them!' His company also works hand-in-hand with other French businesses on the ‘Sylen’ electronic reader.

Regarding the applications for this new technology, in press or publishing for example, the same case applies: European businesses must definitely not rest on their laurels. 'The big players have already seen the immense market that is preparing and, like Amazon, are positioning themselves so that the average user goes to them for what they want,' Angelé explains. We need to understand their point of view: this is a new support enabling the creation of numerous editorial or commercial partnerships that will give the consumer access without an intermediary, without the barriers of language or national law!

New start for the press?

Regarding the press, each is considering their electronic declension after taking its place on the Internet. Les Echos, a French economic daily, is amongst the first to take the plunge. 'Via the site lesechos.fr, we will now very quickly propose a subscription enabling us to deliver the first machines at the end of April/beginning of May,' announces Philippe Jannet, technical director of the electronic edition of Les Echos. The content will be continuously updated, and will support Bluetooth, Wifi and GPRS connections.

'It’s a new opportunity for the press!' rejoices Rives, who personally worked on this project. 'It's a chance to seduce readers who don’t usually read the papers, and re-conquer those who have turned to the free papers. The investment is not so big if we consider what’s involved!'

The condition is that they take into account the reader who will require a 'richer format and will not be content with one newspaper only. The content must be enhanced with encyclopaedic information, graphics, and so on,' suggests Rives. This is a requirement for which the Belgian daily De Tidj paid the price. It 'threw in the towel, its version being an identical copy of the newspaper but in e-paper format. It didn't take into account the particularities of the machine,' explains Jannet, assuring that Les Echos would not commit the same strategic error.

As for us, we will also have to get used to a new object. Though a page in black and white doesn’t shock us if we think of it like a pocket book, it may seem austere for other applications. Will it be long until it hits colour or video, and will it long before we get a foldable electronic page? Maybe the technological attraction will make us forget the grainy texture of paper between our fingers. In principle, and even Rives agrees, that it is 'certainly a difficult alchemy.' But, he reminds us, 'paper did not explode in 321 BC, we had to wait until the 1500s.'