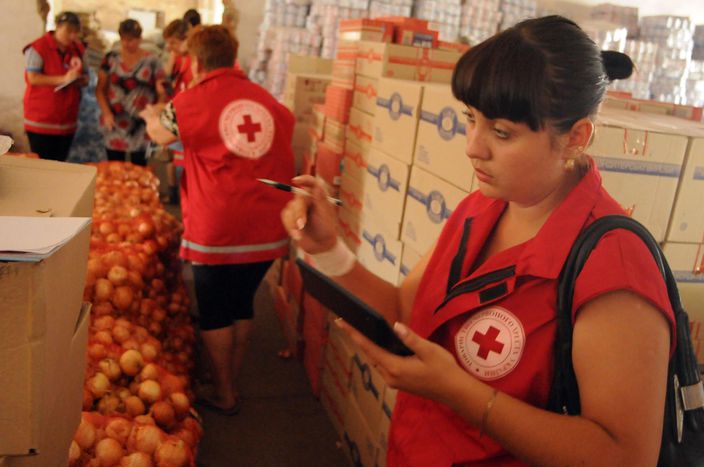 The Ukrainian revolution, or the Maidan revolution, hasn’t just pushed aside a government which was elected through the ballot boxes; it’s also redrawn the map of what – until very recently – was Ukraine, a country once believed to be united. 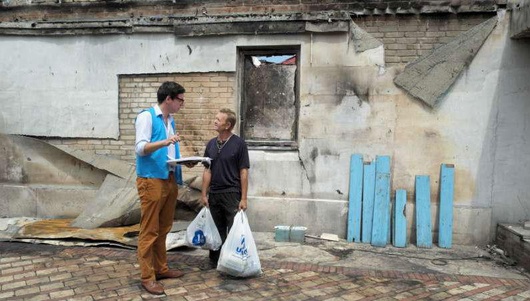 Cities razed to the ground, streets deserted, buildings in ruins and lives lost. This is the panorama left behind by the almost 800,000 Ukrainian citizens who have fled the country since the conflict began, as suggested by data from the United Nations Refugee Agency (UNHCR). The United Nations have also confirmed that over 70 people are killed or injured every day in eastern Ukraine, with the number of civilian deaths exceeding 2,200 – not forgetting the passengers and staff on board the MH17 flight – and some 6,000 people injured.

In almost all wars, the population always ends up trapped in no man’s land and caught in the crossfire, which results in an exodus that knows no homelands, no national flags and no borders. “They’re not tourists; they’re refugees escaping the horrors," stresses Vincent Cochetel, the director of UNHCR’s Europe Bureau. He asserts that internally displaced persons – the majority of which are women and children – are at the greatest risk. There are now almost 190,000 lost souls wandering through a country which is engulfed in chaos, although the figure could be higher, because the men don’t want to be registered for fear of being recruited by the army or, even worse, being subjected to the contempt and reprisals of their own people.

Punitive operation against the population

The rebel regions of the Donets Basin, or Donbas, are experiencing a constant drip of refugees who are escaping from the punitive operation which Kiev has resumed against Donetsk and Luhansk, the only bastions to offer resistance. But other regions like Crimea are not unaffected either. The battles are exacerbating the siege that the inhabitants are subjected to on a daily basis, experiencing hardships which range from cuts in the supply of electricity and drinking water to a lack of food and basic necessities – not to mention money, which hasn’t been in circulation now for months. The first offensives are cutting off all of the supply networks for the survival of the population.

Entire neighbourhoods are reduced to rubble, and hospitals, schools and homes are pulverised by the heavy artillery. It’s a bleak landscape where death is creeping up on the inhabitants and forcing them to flee from the horrors of this war, while the Organisation for Security and Co-operation in Europe (OSCE) is making a half-hearted effort to make sense of this madness. 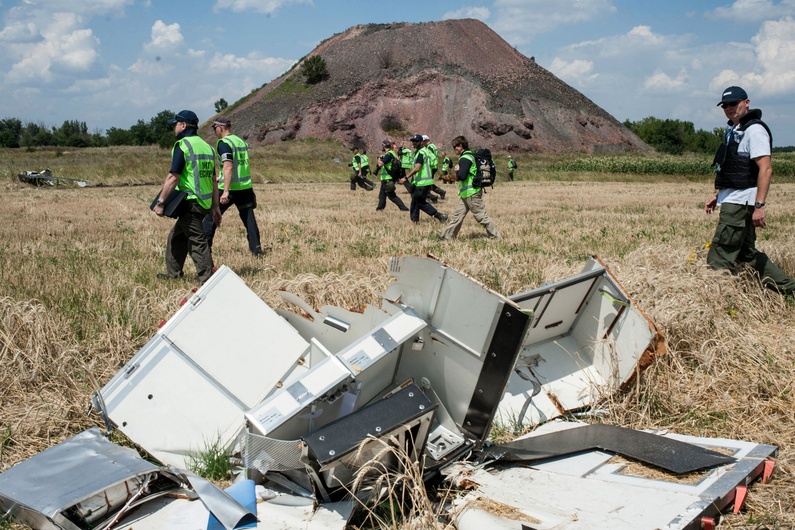 Battles are breaking out very close to the neighbouring country just 1,000 metres away. “This isn’t a film; it’s real life”, says Irina, a resident of the Izvaryne settlement, as she contemplates the destruction suffered by her people and waits to cross the border to Russia. Others like Oleg are refusing to leave their homes, or rather the ruins which are enduring the shelling. “I lived my 37 years of married life here”, he says mournfully. Today he’s burying his wife in the back yard, another victim of a mortar strike.

Leaving everything behind to survive

They arrive with nothing but the clothes on their backs – and most of them without papers – recognising that they don’t know what awaits them. They spend hours – even days – queuing to cross the border, but beforehand they have to fill out an application form. Their faces change the moment they scribble their signature and their relief is reflected in their eyes. They’re leaving Ukraine behind and, with that, a war which has ripped everything away from many people. 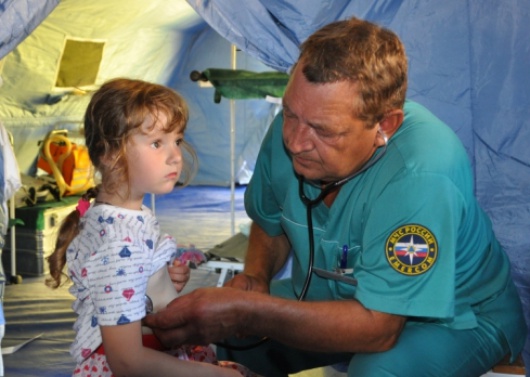 Kilometres of vehicles and people on foot give an indication of the magnitude of the humanitarian crisis in the south-east of the country. The advances made by the military columns are quickening the pace of the refugees, fear is breaking out and priority is given to the entrance of children and the sick, because the checkpoints can’t guarantee their safety. They’re frequently the targets of mortar strikes, while the OCSE volunteers are acting as silent bystanders with the ideology of look, listen and keep quiet. More than 207,000 people have found refuge in Russia; many of those have been taken in by friends and family living in some of the country’s various cities, but there’s a large amount of people who don’t have anywhere to go. Almost 900 temporary accommodation centres have been opened up for these individuals, giving shelter to around 60,000 Ukrainians. The Russian Emergencies Ministry states that there are also other refuge options, such as in cultural institutions, holiday camps, hostels, sports facilities and, in some cases, even in passenger rail cars.

The Russian Federal Migration Service confirms that 170,000 people have applied for some form of protection, while 48,000 are having their papers processed in order to receive provisional asylum. Amongst all of these figures, however, there’s one which causes the most concern: the 17,000 displaced minors, whose future and survival depends on the aid that they receive in the hands of doctors and psychologists. 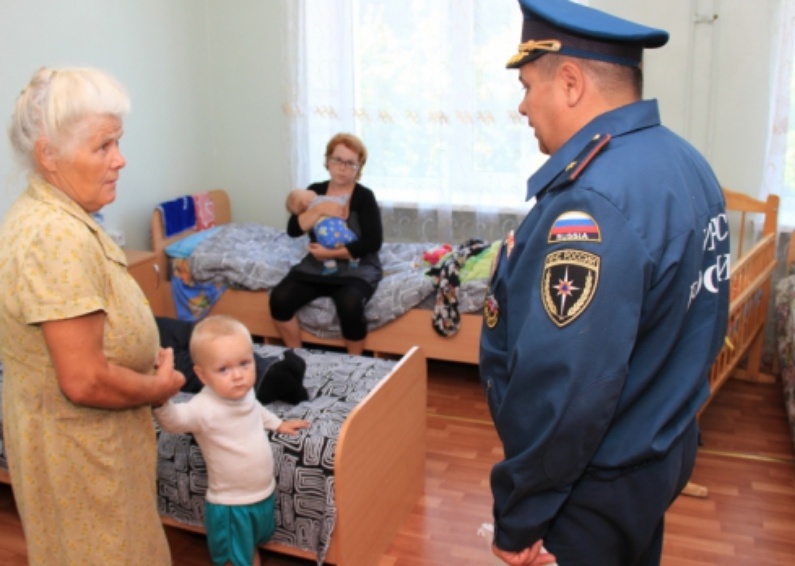 The alarming situation transpiring on both sides of the border between Russia and Ukraine has provoked a response from the International Committee of the Red Cross. With support from Moscow, they’ve sent a convoy made up of 280 lorries and 1,800 tonnes of humanitarian aid. Another 1,096 tonnes have also been sent to the refugee camps with food, water and warm clothes.

This has proved to be a slight relief which has served only to buy some time while the number of people at risk increases. This war of attrition has also affected the soldiers themselves who, dejected and without resources, are deciding to throw their weapons to the group in the face of their precarious situation. Nobody was prepared for this, and the authorities don’t want to – nor can they – cope with the necessary measures, leaving civilians, militants and territories to their own fate.

Apart from the meetings that aim to put an end to a war which is becoming entrenched in time and territory, Russia and the Red Cross have announced a new convoy for the south-eastern Ukrainian population. However, difficulty arises in reversing a situation which has led 800,000 people to leave everything behind and look ahead, because every step that they take is a hopeful step towards escaping a war which left them with nothing in a matter of hours.