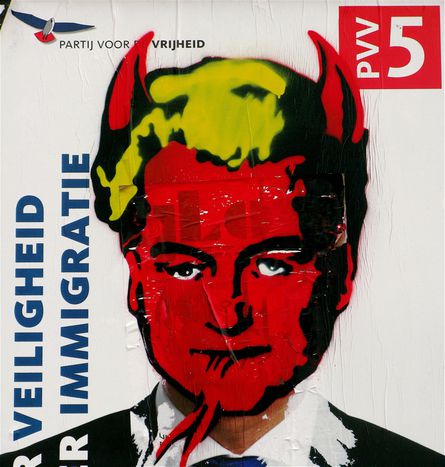 Dutch elections: did Geert Wilders get the last laugh?

Italian, Dutch and Belgian commentators doubt that VVD leader Mark Rutte will be able to form a more stable government than his christian democratic predecessor Jan Peter Balkenende after elections on 9 June

On 9 June the conservative-liberal people's party for freedom and democracy (VVD) narrowly won the Dutch elections with 31 of 150 seats, followed by the Dutch labour party (PvdA) with 30 and Geert Wilders' right-wing populist party for freedom (PPV) with 24.

The Netherlands is divided, the christian oriented daily writes commenting on the narrow victory of the conservative-liberal people's party for freedom and democracy (VVD): 'The election results show a country that is accentuating more than ever its secular character in a political movement that gives cause for concern about social peace. The PVV is the big winner but there is no real opportunity to cash in on this victory. The results give the leaders of the VVD and the PvdA [Dutch labour party], Mark Rutte und Job Cohen a great responsibility to find a balance between the individual and the community in a country whose character has changed through globalisation. The worrying advance of the PVV, which must be taken seriously, makes this task just as urgent as battling the economic crisis. In view of the extreme positions of this party it is not illogical to seek the answer in a moderate centre'

The true winner of the Dutch elections is right-wing populist Geert Wilders whose party for freedom (PVV) won 24 parliamentary seats, writes the Italian business paper: 'In the end the election campaign's shift to focus on economic issues didn't hurt Wilders. His crusade against immigrants and islam finds supporters even when he's not at the centre of debate. His party wants to levy a tax on veils that would effectively put a stop to immigration from muslim countries, ban the Koran and the construction of new mosques, close down islamic schools and employ 10, 000 police officers to restore the Netherlands' lost security. To round the whole thing off immigrants (who make up around three million of the country's 16.5 million inhabitants) are to be excluded from social benefits' (Eliana Di Caro)

Forming a stable coalition will be difficult in the Netherlands. Yet the country is still in a better position that its neighbour Belgium, writes the daily: 'The situation is not easy because the Netherlands is struggling with the fragmentation of its political landscape. But it is a major advantage that the incoming government has a firm goal and that the cards for the coalition negotiations are clearly on the table. The homework has been done. This gives the Netherlands a nice edge over Belgium, where an extended period of formation of government seems likely after the elections. But in the Netherlands too, which has a long tradition of being open to the world, the discussions were conducted for the main part in a kind of isolation. There wasn't much talk about Europe's future in these times of crisis or about the balance of power shifting to the east. This provincialism, which also marked the Belgian election campaign, is incomprehensible' (Bart Beirlant)