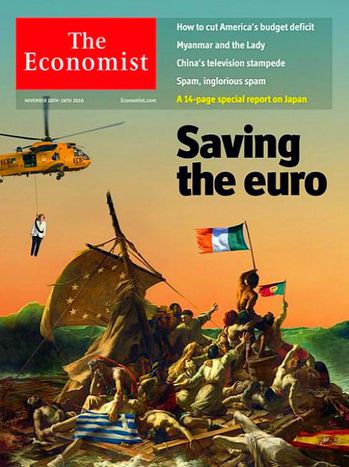 Do the Merkel, Monti and Sarkozy dance

‘With or without you’ - Cinco Días, Spain

With the goal of creating a fiscal union and tougher sanctions for deficit sinners Berlin and Paris are setting a new pace, comments the Spanish left-liberal business paper: ‘Europe is advancing rapidly towards the full imposition of budgetary discipline and anyone who can't or doesn't want to see this risks being left behind or travelling in second class. Berlin and Paris have confirmed that come what may they will present a joint proposal for amending the EU treaties [at the EU summit] on 9 December with the goal of reinforcing economic government, moving towards a fiscal union and enshrining budgetary discipline in the treaties. Both Merkel and Sarkozy claimed that their proposal is almost ready for presentation and that they have no intention of making their plans contingent on the approval of their EU partners’

Mario Monti's presence at the summit meeting in Strasbourg gives hope that it won't just be left to the Merkel-Sarkozy duo to decide the fate of the eurozone, the Italian left-liberal daily writes with relief: ‘Mario Monti has intervened in the Franco-German liaison, changing the dynamics of the European decision-making process. It sufficed for the Italian prime minister to side with Merkel on the question of the role of the European central bank to end the tug of war between Paris and Berlin that has crippled the duo on the Rhine for months. It sufficed for Monti - with harsh words directed at Berlin and Paris - to underline the importance of Europe's community principle to allay any suspicions that from now on a triumvirate would replace the Franco-German duo. There is hope that Italy's intervention won't lead to new blockades but will rather untie the knots and soften the positions' (Andrea Bonanni)

The meeting between German chancellor Angela Merkel and French president Nicolas Sarkozy in Strasbourg has shown that they both need each other in the debt crisis, the German left-liberal daily writes: ‘Whereas before the differences were often provocatively underlined, now they're covered up, played down - or talked away. In Strasbourg Sarkozy no longer put forward even tentative arguments for euro bonds, the joint shares for the eurozone so heartily rejected by Merkel. Nor did he make any reference to the expansion of the European central bank's competences he had hoped for. Instead he professed his commitment to the independence of the ECB with such eloquence that Merkel herself couldn't have done a better job. For her part the chancellor called for a European fiscal union, as envisaged by her host, as if simply harmonising the tax systems could permanently end the crisis. At least the two know that they need each other. They're acting accordingly - more consistently than ever. That's all we can expect for now. But in times of crisis that's already plenty’ (Axel Veiel)

Angela Merkel and Nicolas Sarkozy stressed the independence of the ECB at their summit meeting in Strasbourg. This stance will prevent a quick solution to the European debt crisis, the French business paper admonishes: ‘The true challenge was to put an end to the tug of war over the role of the European central bank, so as to prevent the eurozone crisis from proving right all those who are already busy writing the single currency's obituary. Angela Merkel didn't budge an inch. But she did grudgingly accept a ceasefire with Nicolas Sarkozy: a pact of silence was agreed, with no one telling the ECB what to do, either one way or the other. Meaning that the central bank is to be left to its own devices. Paris is persuaded that the ever worsening situation will force Mario Draghi to open his coffers. The problem is that, today as in the past, the keys are in Berlin and time is ticking’ (Dominique Seux)