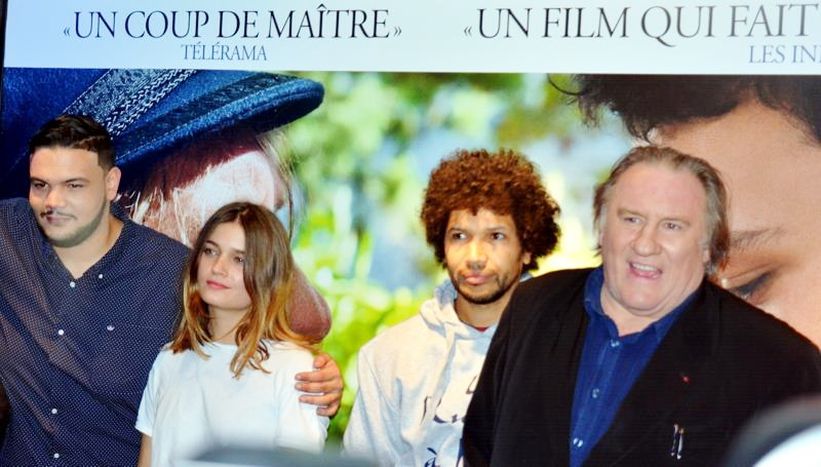 Straight from the 16th annual Mediterranean Film Festival, cafébabel Brussels brings you a preview of the film Tour de France, starring Gérard Depardieu and young rapper Sadek. The Belgian release is planned for the 14th of December 2016.

9:30pm. It's Saturday night, and there's a throng of people in front of Botanique's screening room, The Orangerie.

The film was supposed to start at 9:30. But so far, the crowd doesn't seem too impatient. The atmosphere is friendly. Music from the café next door fills The Orangerie's entryway, where journalists and moviegoers are patiently waiting for the doors to open.

The film's director, Rachid Djaïdani, takes advantage of the wait to mingle with the crowd. He greets people warmly and shakes a few proffered hands, as if to apologize for the wait.

The screening lasts about an hour and a half.

More than anything else, the film is an intimate road movie about the journey of two men:  Serge, played by Depardieu, and Far'Hook, played by a young rapper, Sadek. Serge is a bitter, disillusioned yokel whose unique passion in life is his idol, the painter Vernet. Far'Hook, on the other hand, is a rapper who thinks that France has abandoned him. They both harbour prejudices against each other.

In the aftermath of a back-alley shooting,  Far'Hook is trying to lie low and get out of reach of his enemy. But how? His best friend, Bilal, is Serge's son, and he has an idea. Bilal has had a falling-out with his father. He asks Far'Hook to take his place as his father's chauffeur on a road trip across France in the footsteps of Serge's favourite painter, Vernet. Far'Hook accepts, seeing it as an opportunity to get out of Paris and put some distance between himself and his adversary.

During the trip, the two slowly let go of their prejudices. They begin to see each other differently, as two men who have both led rough lives. They are also two men who are constantly blaming others for their problems. Serge hates the troublemaking foreigners who have moved into his neighbourhood, and Far'Hook blames France and its promise of liberty, "la Marianne," for abandoning him.

Bit by bit, they get to know each other and learn about each other. In the end, they are able to help each other because they are clearly in the same boat.

Rachid Djaïdani's film is an attempt at bringing the frustrated, disillusioned members of France's working class together by emphasizing their similarities so they can stop being so divided. That division is dangerous, because if it continues their anger will grow until it's no longer possible to bring the Serges and the Far'Hooks of France together. The former will turn to extreme political parties, and the latter will withdraw into self-segregated communities.

But aren't we already witnessing the beginnings of this kind of rupture throughout Europe? If that's the case, this film takes on a whole new importance; it becomes a cry for help. But it's a good cry, because it has the optimistic audacity to promote cooperation between the working classes.

Because this reconciliation can't happen by itself, Djaïdani suggests a route for us to follow: art. The entire film is an homage to art. Serge paints throughout the journey, and Far'Hook writes and sings the words that he hopes will make him famous. As the two grow closer, we see the rapper adding a little blue here and there to complete one of Serge's paintings, and Serge trying to rap.

It's as if the director wants to show us that art can reach beyond our prejudices and act as a mediator.