Is Barroso’s withdrawal of his proposed team of Commissioners a victory for democracy or a demonstration that EU decision-making is still largely conducted behind closed doors? 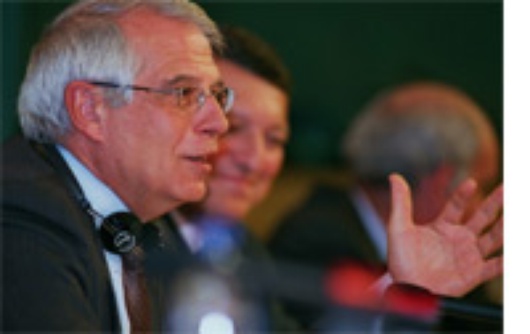 As we are told in the preamble of the Constitution, democracy means that “power is not in the hands of the few but of the highest number”. Yet how can this principle apply to the European Union when the will of the Commission (the executive) has traditionally been beyond censure by the democratically elected members of the European Parliament?

Finding a voice in more ways than one

Barroso’s decision to postpone the Parliamentary vote on his twenty-four proposed Commissioners turned out to be more of a humble climb-down than the bombshell that a Parliamentary rejection would have been. However, the result is the same: he will have to reshuffle; and consequently the atmosphere in Strasbourg on Wednesday was markedly different to usual. When the Portuguese President of the Commission announced the withdrawal of his team, there was a frisson of excitement in the chamber, as supporters of the decision applauded and its opponents booed. In more ways than one, it felt like the European Parliament had finally found its ‘voice’. As a Briton, I cut my political teeth on proceedings in Westminster (the UK Parliament) where members frequently cheer, jeer, boo and hiss as though they were spectators at some grotesque pantomime. In contrast, Strasbourg is perceived as polite, quiet and rather sterile – a place where vocal outbursts are tempered by pragmatism and the myriad of simultaneous translation. But Wednesday had a different feeling - it seemed like the European Parliament was no longer reticent to rise up against the actions of the Commission. That can only be a good thing for democracy in the European Union.

The benefit of the European Parliament having more power and influence is that it ensures that those appointed to the Commission are more effectively scrutinised by people who have been democratically elected by the citizens of Europe, meaning that power lies with the many, not the few. An all too frequent criticism of the EU is that it is too bureaucratic and is a ‘gravy train’ boarded by those who are appointed to serve as Commissioners. Sceptics cite certain Commissioners’ failure to send their accounts to independent auditors and their excessive expenses claims, reiterating the fact that there is little or no accountability for their actions. As British historian Lord Acton famously stated, “power tends to corrupt; absolute power corrupts absolutely”. More power to the European Parliament would make appointed figures more accountable to both elected MEP’s and, more importantly, the citizens of Europe. This lack of scrutiny is not just seen in Europe, indeed only last week there was widespread uproar when the British executive (The Cabinet) refused to allow a vote in Parliament on the re-stationing of troops in Iraq. Barroso’s climb-down must obviously be welcomed, but wouldn’t it have been better to let it go to a vote?

A Public Relations Disaster for Europe

Although Parliament may have ‘won’, this is not a week for Europe to be patting itself on the back. Even though Barroso was forced to back down for fear of Parliament vetoing his Commissioners, the fact that he did so instead of simply allowing the vote to be held makes a huge difference to the perception of the European project. Over the coming days and weeks, the Euro-sceptic movement and media will be having a field day: firstly over the appointment of Buttiglione as Justice Commissioner (what next – Le Pen for Immigration Commissioner?!), and secondly because this situation, if you follow their reasoning, can be shown to be the result of utter incompetence. One can imagine the headlines in The Sun, forever the torchbearer of pragmatism, ‘EU-idiots…EU’re useless’ and so on. If it had gone to a vote it could at least be argued that the Parliament had voted ‘no’ and that citizens, too often removed from EU decision-making despite what the rhetoric may say, would have seen EU democracy in action. In other words, they would have seen their MEP that represents them voting on a high profile matter. Instead, although Barroso’s choice might be termed a ‘win’ for democracy, the political football continues to be hoofed around the pitch and the great clash may yet go into extra time.