Delicious paella: Coming soon to a mobile near you!

No more will you hear talk of “rice with extra bits”. The original Valencian paella could be about to be awarded its very first emoticon on the instant messaging service, Whatsapp. The #PaellaEmoji may soon be available on the (very) small screen.

Lunchtime at work. In summer, there’s salad and tabbouleh in abundance. In winter, soups become the belle of the ball. The line to use the microwave is getting longer. When I finally sit down at the table, there it is: that infamous package adorned with a photo of yellow rice and diced meat, baring the famous six letters: “paella”.

Good God... call that paella? Being Valencian, I’m appalled and start to grumble, while the owner of the package laughs and admits he knows this gastronomic mockery is definitely not paella. If there’s one thing us Valencians are known for exporting to the rest of the world, it's paella: just rice, meat or seafood, and green beans. No chorizo or peas, please!

Just like the poor Italian pizza – I’m certainly not the only one writer who shivers at the thought of office culinary train wrecks – paella is simultaneously one of the most popular and one of the most insulted dishes in the world. To help address this issue – as well as to avoid repeating over and over again that “rice with extra bits isn’t paella” – Wikipaella was born. This non-profit organisation was created to promote and protect the original dish.

However, it was the Valencian comedian Eugeni Alemany who decided to launch the campaign “We want a #PaellaEmoji on Whatsapp!” through the website change.org. Alemany is calling for an emoticon that represents paella to become standard in the famous instant messaging app. 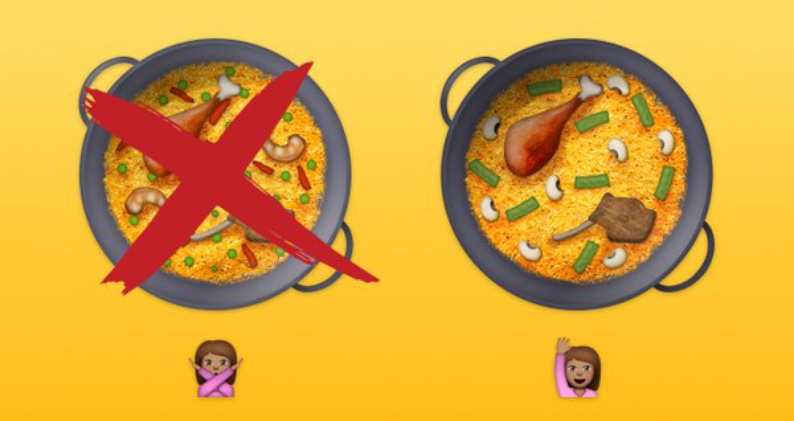 "For Valencians, paella is more than just a traditional dish," explains Alemany in the petition addressed to Tim Cook, CEO of Apple, "It is a way of living. […] It is an icon of Spanish culture in general and pride of the Valencian region.” In my opinion he's right, since good paella generally also implies a reunion between family and friends. It’s in our DNA, for crying out loud!

As well as collecting over 4,000 signatures, the petition has become a revolution on social networks. This ludicrous campaign has brought together political parties, artists, athletes and celebrities from all over the country, as well as, of course, thousands of Valencians determined to make their signature dish a world icon. So much so that in fact the paella emoticon is among this year’s finalists to be added to the app.

However, the real commotion happened last Monday after the reveal of the proposal for the emoticon that Unicode (the organisation that decides which emoticons to add to the app) was considering. It didn't look anything like paella: chicken, peas and prawn tails? Outrage again! Thus, social media began a new movement, under the hashtag #ComboiPaellaEmoji, in order to propose that the emoticon contain only the original paella ingredients, a hashtag that soon enough became a worldwide trending topic.

Eugeni Alemany has a dream.

Finally, the humourist instigator of the campaign announced that Unicode had accepted the proposal and modified the icon to include “only traditional ingredients”. So, while the Unicode committee is gets together to decide which emoticons will be added to the messaging app, at least we know paella would now be represented in the right way. Fingers crossed!