This is part seven of a special series on cafebabel.com's Berlin blog, in which three Babel reporters will cover a not so well-known aspect of the Berlinale, Berlin's famous film festival. It's called "Berlinale Talent Campus", a forum for 350 young filmmakers from all over the world to present their works, meet each other and improve their skills during various workshops.

How are you going to approach your story? Is it a music documentary? Is there something Felliniesk about it? Will the war play a big role in your movie? How did you come across these people? The questions came from experts and they hoped to get answers from young talents – an upside-down world?

Not really, because the experts are still the ones to learn from. But on the fifth day of the Talent Campus the Doc Station and in the afternoon the Script Station at HAU2 give a selected group of talents the opportunity to present their work and get a feedback from people who know the business and also from the audience. Although the clattering metro trains outside of the windows are constantly reminding the audience of Berlin reality, Dick Fontaine, a veteran in documentary filmmaking and Doc Station jury member, is touched when Luis from Uruguay tells about his intention to do a film about female prisoners in his homecountry during the military dictatorship – „It had been boiling in me,“ Luis says. „And now I want to let it flow into a lake where people can mirror themselves.

Working together: Two Talents at the Campus. 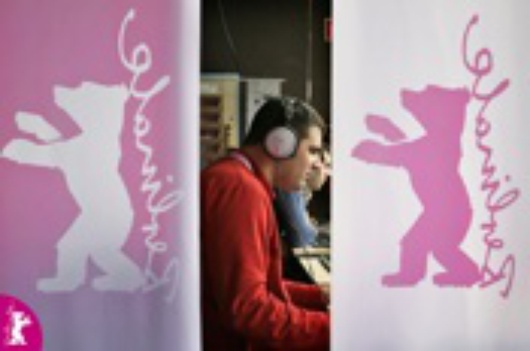 Also Dick can already see an interesting film coming out of Pullulu’s story about a former football star in the Congo whose life got destroyed by the political system: „You come from an individual to tell a more general story. That’s very good.“ In two hours the audience gets a rare glimpse on 12 brand new projects that are still in progress. While having Linsen and Spätzle for lunch at loved and hated WAU I witness another work in progress. At the table next to me a Swiss cinematographer and a director from Iceland are talking about working together. Well, it’s rather the Swiss talking: „I don’t know if she likes me. But I saw her on the website and I had the feeling that we should meet and talk.“ What they have in common is their interest in fiction-documentary, he says. So maybe the Campus is the beginning of a wonderful international co-production?

The Script Station session at least shows a perfect collaboration. It’s between script writers and actors. Before the latter can show their skills, the screenwriters have to pitch their scripts – that is, they have to outline the story and make it sound as interesting as possible – while being observed by David Thompson, Head of BBC Films. Issues that the young generation is interested in are diversified: happy end in Rumania, teenage abuse in the US, life in Berlin, reincarnation, drugs and killing in Spain, coming of age in Argentina. David Thompson is very friendly in his questions but his advice is clear: „Be short an crisp! The relevant things you’ll get asked.“

When the actors visualize two excerpts from two different scripts one of the most important topics in feature films in general and also in the projects of the younger generation is tangible: love. And from the conversation that comes up after the performance love is also what accounts for the collaboration of authors and actors: the love for the characters.